The Attributes of God in Christian theology are those characteristics of God revealed in the Bible.

Many of these attributes only say what God is not - for example, saying he is immutable is saying that he does not change. The attributes of God may be classified under two main categories:

The Westminster Shorter Catechism's definition of God is merely an enumeration of his attributes: "God is a Spirit, infinite, eternal, and unchangeable in his being, wisdom, power, holiness, justice, goodness, and truth."[3] The Westminster Larger Catechism adds certain attributes to this description, such as "all-sufficient," "incomprehensible," "every where present" and "knowing all things".[4] This answer has been criticised, however, as having "nothing specifically Christian about it."[5]

The aseity of God means "God is so independent that he does not need us."[6] It is based on Acts 17:25, where it says that God "is not served by human hands, as if he needed anything" (NIV). This is often related to God's self-existence and his self-sufficiency.

The graciousness of God is a key tenet of Christianity.

The holiness of God is that he is separate from sin and incorruptible. Noting the refrain of "Holy, holy, holy" in Isaiah 6:3 and Revelation 4:8, R. C. Sproul points out that "only once in sacred Scripture is an attribute of God elevated to the third degree... The Bible never says that God is love, love, love."[7]

The immanence of God refers to him being in the world. It is thus contrasted with his transcendence.

Immutability means God cannot change. James 1:17 refers to the "Father of the heavenly lights, who does not change like shifting shadows" (NIV).

The doctrine of the impassibility of God is a controversial one. It refers to the inability of God to suffer.

The impeccability of God is closely related to his holiness. It means that he cannot sin.

The incorporeality or spirituality of God refers to him being a spirit. This is derived from Jesus' statement in John 4:24, "God is spirit." Robert Reymond suggests that it is the fact of his spiritual essence that underlies the second commandment, which prohibits every attempt to fashion an image of him."[8]

The incomprehensibility of God means that he is not able to be fully known. Louis Berkhof states that "the consensus of opinion" through most of church history has been that God is the "Incomprehensible One". Berkhof, however, argues that "in so far as God reveals Himself in His attributes, we also have some knowledge of His Divine Being, though even so our knowledge is subject to human limitations."[9]

The infinity of God includes both his eternity and his immensity. Isaiah 40:28 says that "Yahweh is the everlasting God," while Solomon acknowledges in 1 Kings 8:27 that "the heavens, even the highest heaven, cannot contain you". Infinity permeates all other attributes of God: His love is infinite, his powers are infinite...

Exodus 34:14 makes the surprising statement that "Yahweh, whose name is Jealousy, is a jealous God." 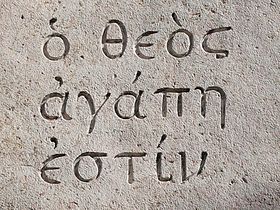 "God is love" in Greek on a stele in Mount Nebo.

1 John 4:16 says "God is Love." D. A. Carson speaks of the "difficult doctrine of the love of God," since "when informed Christians talk about the love of God they mean something very different from what is meant in the surrounding culture."[10] Carson distinguishes between the love the Father has for the Son, God's general love for his creation, God's "salvific stance towards his fallen world," his "particular, effectual, selecting love toward his elect," and love that is conditioned on obedience.

While the mission of God is not traditionally included in this list, David Bosch has argued that "mission is not primarily an activity of the church, but an attribute of God."[11]

The omnibenevolence of God refers to him being "all good". God's goodness encompasses his grace, love, mercy and patience.

The omnipotence of God refers to him being "all powerful". C. S. Lewis clarifies this concept: "His Omnipotence means power to do all that is intrinsically possible, not to do the intrinsically impossible. You may attribute miracles to him, but not nonsense. This is no limit to his power."[12]

The omnipresence of God refers to him being present everywhere. Berkhof distinguishes between God's immensity and his omnipresence, saying that the former "points to the fact that God transcends all space and is not subject to its limitations," emphasising his transcendence, while the latter denotes that God "fills every part of space with His entire Being," emphasising his immanence.[13] In Psalm 139, David says, "If I go up to the heavens, you are there; if I make my bed in the depths, you are there" (Psalm 139:8, NIV).

The omniscience of God refers to him being "all knowing". Berkhof regards the wisdom of God as a "particular aspect of his knowledge."[14] Romans 16:27 speaks about the "only wise God".

The oneness of God refers to his being one and only. See Monotheism and also Trinity.

The righteousness of God may refer to his holiness, to his justice, or to his saving activity.

The simplicity of God means he is not partly this and partly that, but that whatever he is, he is so entirely. It is thus related to the unity of God.

The sovereignty of God is similar to his omnipotence and providence, yet it also encompasses his freedom. 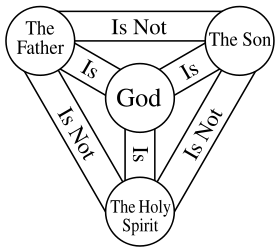 Transcendence is that God is outside space and time, and therefore eternal and unable to be changed by forces within the universe.[16] It is thus closely related to God's immutability, and is contrasted with his immanence.

The Trinity of God refers to him being three in one. God is understood to be a unity of Father, Son, and the Holy Spirit.

The veracity of God means his truth-telling. Titus 1:2 refers to "God, who does not lie."

Moses praises the wrath of God in Exodus 15:7. Later in Deuteronomy 9, after the incident of The Golden Calf, Moses describes how: 'I feared the furious anger of the LORD, which turned him against you, would drive him to destroy you. But again he listened to me.' (9:19) In Psalm 69:24, the psalmist begs God to: 'consume' his enemies 'with your burning anger'.

In the New Testament, Jesus says in John 3:36, "Whoever believes in the Son has eternal life; whoever does not obey the Son shall not see life, but the wrath of God remains on him."