"Diva" is a song by American R&B singer Beyoncé Knowles. The song was written and produced by Shondrae "Bangladesh" Crawford, Sean Garrett, and Knowles for her third studio album, I Am... Sasha Fierce (2008). It was released as the album's third overall single in the United States alongside the third international single "Halo". "Diva" is an R&B song, set in a hip hop groove, and carries a stuttering beat. The lyrics of the song deliver messages of independence and female empowerment. The song boasts a beat and bassline similar to that of another Bangladesh production, "A Milli" by American rapper, Lil Wayne, and critics coined "Diva" as a "female companion" to the latter.

"Diva" received mixed to positive reviews, with critics having polarized opinions concerning its affiliation with "A Milli". Despite being released to rhythmic and urban radios only in the United States, the song reached number 19 on the Billboard Hot 100 chart, topping the Hot Dance Club Play chart, and attaining a high point of number three on the Hot R&B/Hip-Hop Songs chart. The song was certified gold by the Recording Industry Association of America (RIAA). Although it was only officially released in the US, the song appeared on the charts in Australia, Ireland, the Netherlands, New Zealand, and the United Kingdom.

The accompanying music video for "Diva" was directed by Melina Matsoukas. It shows the singer and backup dancers in a warehouse, and presents a choreography similar to that of her previous single "Single Ladies (Put a Ring on It)" (2008). Knowles also appears in different Thierry Mugler couture pieces. The video ranked at number 13 on BET's Notarized: Top 100 Videos of 2009 countdown. Although she did not perform the song in any televised appearances, the song was a part of her set list on the I Am... Tour.

Keyshia Cole (pictured) initially declined to record the "Diva" and so, it was given to Knowles.

According to an interview that the composer of "Diva", Bangladesh gave with Rap-Up, the song was originally intended to be put it on the track-listing of his own mixtape.[1] He also had plans to choose a female artist of his choice to contribute vocals to the song.[1] However, he decided to play the song to American R&B singer Keyshia Cole. Cole, who liked the beat of "Diva", but not the whole track, eventually refused to record the song. Later she said she would sing the song, however, this time Knowles also wanted the track for her then upcoming album.[2] Ultimately, Bangladesh decided to give Knowles the song and produced another track for Keyshia Cole.[1] About one month after the release of I Am... Sasha Fierce (2008), it was reported that American R&B singer Ciara, who was at that particular time working on her third studio album, Fantasy Ride, had remixed "Diva". The remix was supposed to be featured on her Fantasy Ride Mixtape.[3]

"Ego" was initially planned to be serviced as the second US urban single, and the third overall US single from I Am... Sasha Fierce, alongside the third worldwide single "Halo".[4] However, the release of "Ego" was scrapped, and "Diva" was released instead to urban radio[5] while "Halo" was sent for mainstream airplay on January 20, 2009.[6] On the same date, "Diva" was sent to rhythmic radio alone.[7] "Ego" was later released as the third urban single and overall fifth single in the US on May 19, 2009.[8] Additionally, in Germany, "Diva" was featured as the B-side to "Halo" single.[9] Upon the release of "Diva", contemporary music critics noted that there are also many similarities between Knowles' "Diva" and the song "A Milli" by Lil Wayne, as both feature a similar beat produced by Bangladesh.[10] In an interview with MySpace, Knowles agreed that "Diva" seems like woman's equivalent to "A Milli". However, she said that it was not consciously.[11] Consequently, the song became to be known as the feminine companion to Lil Wayne's "A Milli".[12]

"Diva" is an R&B song composed in a moderate hip hop groove tempo,[13] in the key of E major.[13] It carries a "stuttering" beat[14] accompanied by a "slow-rolling, bass-pumping groove".[15] "Diva" marks a change of direction for Knowles because it features the singer rapping over a Roland TR-808 drum machine providing a strong bass, and less instruments than her usual tracks.[16][17] According to Colin McGuire of PopMatters, in "Diva", there is a feel of courage and determination,[18] while Adam Mattera of The Observer noted it could be "a perfect independent women anthem."[19] In terms of sound quality, "Diva" bears resemblance to "Freakum Dress" and "Ring the Alarm", both featured on Knowles' second studio album, B'Day (2006).[20] In the song, the female protagonist speaks and sings about the positive definition of a diva, explaining "diva is a female version of a hustler", and makes frequent references to her millions of dollars, even fanning herself with dollar bills.[16] "Diva" begins with "metallic kick drum", "sly vocal stutters"[12] and Knowles singing with a robotic voice: "I'm a, I'm a, a diva."[15] She then continues: "A diva is the female version of a hustla".[21] According to Nick Levine of Digital Spy, "Sasha", Knowles' alter ego also salutes her earning power in the song.[22]

The song received mixed to positive reviews, with critics either praising or criticizing it being a female companion to "A Milli." Matos Michaelangelo of The A.V. Club said that "Diva" is a flagrant attempt to write a female version of "A Milli".[23] Leah Greenblat of Entertainment Weekly magazine said "Diva" can make a very good feminine companion to Lil Wayne's "A Milli" thanks to their similar music instruments and aural similarities."[12] Noting its similarity to "A Milli", Andy Kellman Allmusic picked out "Diva" as one of the three standout tracks from the album, saying that it is the only song on I Am... Sasha Fierce that bears resemblance to "Freakum Dress" and "Ring the Alarm" in terms of audacity.[20] Stacey Anderson of Spin wrote that "Diva" places a "startling, sexy snarl over window-rattling bass".[24] The Observer's Adam Mattera described the song as a potential source of inspiration to drag queens, however concluded that the track can also leave many persons confused and bewildered.[19] Mariel Concepcion of Billboard noted that "Diva" is not really something new, nevertheless it manages to be the "radio-ready dance" track for which Knowles is beloved."[25] Bill Lamb of About.com wrote that the beat structure allows Knowles to "deconstruct her public image".[14] Alex Thornton of AllHipHop noted that Knowles seems to adopt a masculine character on "Diva", and that like many other dance songs, it is "something decent to bounce to at least."[26]

Colin McGuire of PopMatters picked out the track as a highlight of the album, noting its "Lil Wayne-inspired beat" and describing it as "cheeky", explaining said the song "shows courage and determination" and shows the singer's "impeccable street side...with enough attitude to make it work."[18] Christian Hoard of Rolling Stone noted Knowles turns out "modal-sounding hooks" over 808 bass on "Diva".[17] The Village Voice's Nana Ekua Brew-Hammond described "Sasha Fierce" as "suffer [sic] no such identity crisis, brassy, big-headed, confrontational, and witty...", further reflected on "diva" with Knowles singing "A diva is the female definition of a hustla".[21] Daniel Brockman of The Phoenix remarked that the song is "particularly intriguing" as it progresses through "hard-knockish robbery scenarios" which does not resemble Knowles' "squeaky-clean" public image.[27] On the other hand, Alexis Petridis of The Guardian, reviewed the song negatively, stating: "The sonic trickery on the most experimental track, Diva, isn't interesting enough to distract you from the absence of a tune."[28] Bill Lamb of About.com ranked the song at number eighty-three on its list of the Top 100 Pop Songs of 2009, writing: "One of the quirkiest songs from Beyonce's phenomenal I Am...Sasha Fierce album. The kinetic energy is positively infectious, and don't forget to check out the video."[29] 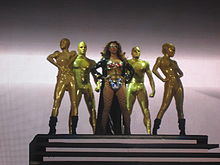 Knowles performing "Diva" on her I Am... Tour.

The music video for "Diva" was shot downtown Los Angeles on November 22, 2008[46] and was directed by Melina Matsoukas,[47] who worked with Knowles for several music videos.[47] The music video premiered on the iTunes Store on December 23, simultaneously with the video for "Halo".[48] The music video is thematically similar to the music video for "Single Ladies (Put a Ring on It)" in the sense that the video is in black and white, Knowles dons her alter ego Sasha Fierce's metal glove and performs choreography with two back-up dancers with more formal leotards. Knowles wears a Gareth Pugh design in the music video[49] as well as a couple of vintage Thierry Mugler Haute Couture pieces like a leather bodice and a reptilia inspired gown. The video was included in Knowles' remix album with videography, Above and Beyoncé.[50] In her 2003 music video for "Crazy in Love" (2003), Knowles husband (then boyfriend) Jay-Z throws a lighter on the floor, which starts a fire along a trail of petrol to a car. Conforming to a Daily Mail's reporter, this particular scene bears a flagrant resemblance to the climax of "Diva"' accompanying music video where Knowles lights a cigar and throws the still lit lighter at a car, prompting it to explode into flames. Knowles had also chosen the exact same location under a bridge in downtown Los Angeles.[16]

The video begins with a dictionary definition of the word "diva", before cutting to a parking lot outside of a warehouse. Knowles, wearing a pair of "dangle shades", walks past a car full of mannequin parts into the warehouse. From here, she is accompanied by her two dancers and a variety of high fashion outfits. When she states "Diva's gettin' money..." she waves a fan made of $100 bills. During the bridge to the climax, Knowles dances on a single light and then during the climax, she is seen very glossy in another wardrobe choice dancing in robotic movements to the beat with gold punctuating the black and white scene. In one scene, Knowles is seen dancing robotically in front of a set of gold-tinted mannequins; while in another, she dances against a wall with two large chains hanging from the ceiling. During the last chorus, Knowles is in her last wardrobe change in front of window which is where the paparazzi had taken photos of her. At the end of the song, Knowles walks back out to the parking lot. She lights up a cigar and throws the lighter into the car, letting it explode. As she walks away, the intro to "Video Phone" (a track from I Am... Sasha Fierce) plays. The explosion retains its original fiery colors in contrast with the black and white. The video ranked at number 13 on BET's Notarized: Top 100 Videos of 2009 countdown.[51]

Although Knowles did not perform the song in any televised appearances, the song was a part of her set list on the I Am... Tour.[52][53] Eventually, the song was included on Knowles' live album, I Am... World Tour as the twelfth track.[54] The performance of "Diva" during her I Am... Tour features Knowles performing the song while being backed up by six dancers (four of which are golden mannequins) while sporting a leopard print glow-in-the-dark leotard, black trenchcoat, leopard print stockings, high heeled boots and leopard-print sunglasses. Eventually, she would remove the trenchcoat.