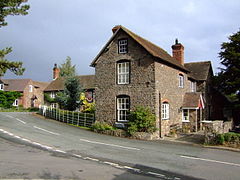 Ditton Priors is a village and civil parish in south Shropshire, England.

The nearest town is Bridgnorth. The village is situated near to Shropshire's highest hill, Brown Clee Hill.

The Cleobury Mortimer and Ditton Priors Light Railway once ran to the village and during (and for a period after) the Second World War there was a major military armaments depot near the village because of the village's remote, rural location and the railway link.