While the small physical size of Singapore does not justify the creation of national subdivisions in the form of provinces, states, and other national political divisions found in larger countries, the city-state is nonetheless subdivided in various ways throughout its history for the purpose of local administration and urban planning.

In the 1990s, the Urban Redevelopment Authority carved up the country into 55 planning areas. These boundaries became increasingly accepted as an alternative method of subdividing the country, made all the more popular as the boundaries do not change compared to the more fluid nature of electoral boundaries. The Singapore Department of Statistics adopted these boundaries for the latest 2000 nationwide population census, and the Singapore Police Force uses them as an approximate guide when demarcating boundaries for its Neighbourhood Police Centres, as opposed to the former Neighbourhood Police Post system which was also based on electoral divisions. 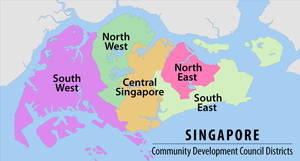 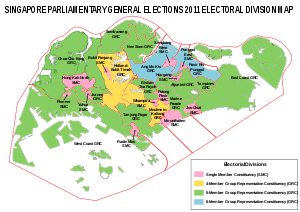 Electoral divisions for the 2011 General Elections.

The administrative division of Singapore into five Community Development Council Districts and the further breakdown into Constituencies (which mostly relate to local Town Councils, the second-level administrative division of Singapore) and further into Electoral Districts are treated together because of its hierarchical nature. Since 24 November 2001, Singapore has had an administrative subdivision into 5 districts, headed by mayors and with Community Development Councils (CDCs) as local administrations. The CDCs initiate, plan and manage community programmes to promote community bonding and social cohesion. The electoral boundaries of Singapore are relatively fluid, and are reviewed prior to each general election. The districts are composed of the constituencies and electoral districts (the latter as of the 2006 General Elections):

There are currently five CDCs, namely the

The council boundaries follow that of the existing political divisions, with each handling between four to six GRCs and SMCs and roughly dividing the country's population into equal parts. Each CDC is managed by a Council, which in turn is headed by a mayor and has between 12 to 80 members. The members are appointed by the Chairman or Deputy Chairman of the People's Association.

The regions are groupings of the Urban planning areas.

The urban planning areas are subdivisions of the regions.

Singapore is divided into 64 survey districts, of which 34 are mukims (originally, rural districts) and 30 are town subdivisions.

Postal districts were numbered from 01 to 83 under the new system implemented in 1 September 1995. Census data and most forms of internal boundaries had been based on postal districts until the introduction of new planning boundaries in the 1990s.