District 1 (Vietnamese: Quận 1) is the central urban district (quận) of Ho Chi Minh City, the largest city in Vietnam. With a total area of 7.7211 km2 (2.9811 sq mi)the District has a population of 204,899 people (as of 2010).[1] The district is divided into 10 small subsets which are called wards. District 1 is where most of the city's administrative offices, embassies and big buildings are located. District 1 is the busiest district in the city with the highest living standards. Đồng Khởi street and Nguyễn Huệ boulevard in the district are the city's two main commercial centers. Đồng Khởi street is currently hitting its price record at $50,000 for a meter square in 2007.[2]

District 1 and the other seven districts of Ho Chi Minh city were founded on May 27, 1959. Before 1975, the first district only had four small subsets (wards) which are Trần Quang Khải, Tự Đức, Bến Nghé, Hòa Bình (named after major historical characters) and the second district had seven different wards which are Cầu Kho, Cầu Ông Lãnh,Huyện Sĩ, Nguyễn Cư Trinh, Nguyễn Cảnh Chân, Bùi Viện, Bến Thành. In May, 1976, the first and second district combined into the District 1 we have today.

Ho Chi Minh city is Vietnam's biggest and busiest city. A very large population of immigrants from all over the world is currently living and working there. Because District 1 is Ho Chi Minh city's central district, all of the consulates from other countries choose to locate here.

Many of the best public schools in the city are located in District 1. Vietnam's system of private schools in general is still new and still are in the stage of developing.[citation needed]
Kindergarten:

The Saigon Notre-Dame Basilica, the Saigon Opera House, the Central Post Office, the City Hall, Pham Ngu Lao street, the former Republic of Vietnam President’s Reunification Palace, Rex Hotel are some of the most famous historical tourism sights in District 1. Besides specific locations like those mentioned, basically every street in District 1 built and designed since 1946 was by the French. Most of the buildings constructed since the French colony era are still standing now, with most renovated recently. 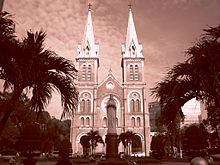 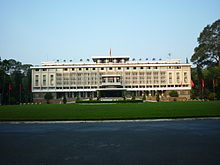 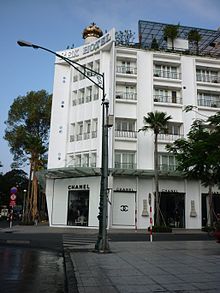 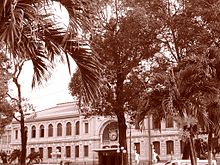 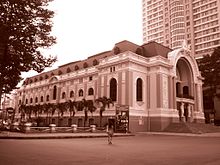 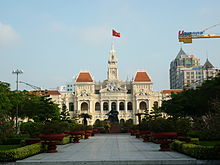