Distribution transformers are normally located at a service drop, where wires run from a utility pole or underground power lines to a customer's premises. They are often used for the power supply of facilities outside settlements, such as isolated houses, farmyards or pumping stations at voltages below 30kV. Another application is the power supply of the overhead wire of railways electrified with AC. In this case single phase distribution transformers are used.

High voltage hobbyists often use these transformers in reverse (step-up) by feeding 120 or 240 volts into the secondary and drawing the resulting high voltage off the primary bushings, using it to power devices like Jacob's Ladders and Tesla coils, and many other high voltage experiments.

Both pole-mount and pad-mount transformers convert the high 'primary' voltage of the overhead or underground distribution lines to the lower 'secondary' voltage of the distribution wires inside the building. The primaries use the three-phase system. Main distribution lines always have three wires, while smaller "laterals" (close to the customer) may include one or two phases, used to serve all customers with single-phase power. If three-phase service is desired, one must have a three-phase supply. Primaries provide power at one of a wide range of standard voltages from 4 to 33 kilovolts, but the most widely used are 7,200 or 14,400 volts. 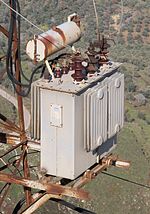 The high voltage primary windings are brought out to bushings on the top of the case.

The transformer is always connected to the primary distribution lines through protective fuses and disconnect switches. For pole-mounted transformers this usually takes the form of a 'fused cutout'. An electrical fault causes the fuse to melt, and the device drops open to give a visual indication of trouble. It can also be manually opened while the line is energized by lineworkers using insulated hot sticks.

The low voltage secondary windings are attached to three or four terminals on the transformer's side. 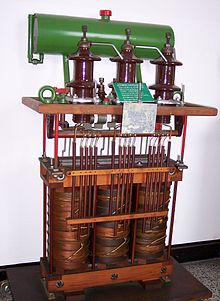 Oil-cooled three-phase distribution transformer, similar to one in above photo, with housing off, showing construction.

The transformers for these are made much the same way smaller transformers are made. Most use a "C" or "E" shaped core made from laminations of sheet steel stacked and either glued together with resin or banded together with steel straps. The low current, high voltage primaries are wound from enamel coated copper wire and the high current, low voltage secondaries are wound using a thick ribbon of aluminum or copper insulated with resin-impregnated paper. The entire assembly is baked to cure the resin then submerged in a large (usually gray) powder coated steel tank which is then filled with high purity mineral oil, which is inert and non-conductive. The mineral oil helps dissipate heat and protects the transformer from moisture, which will float on the surface of the oil. The tank is temporarily depressurized to remove any remaining moisture that would cause arcing and is sealed against the weather with a gasket at the top.