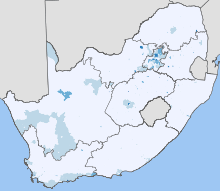 White South Africans as a proportion of the total population. 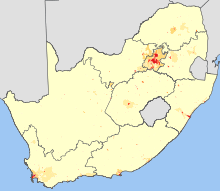 The distribution of white South Africans is fairly evenly spread. They currently make up between 9 and 11% of the total population and number around 4.5–5 million. They are found in large numbers in practically every province in South Africa, although always as a minority, and are high in concentration in large cities. Due to this, the possibility of a "white homeland" or Volkstaat (white homeland for Afrikaners) is unrealistic and fairly not supported among whites, due to their vast spread population. Their spread can conversely be compared to Coloureds (mixed-race), who although making up only around 8% of the population, are the majority in the western third of the nation.

Historically in the pre-1994 provinces, the Transvaal and Orange Free State were predominantly Afrikaans speaking, Natal was mostly English-speaking, while the Cape Province was largely mixed.

Afrikaners are located in all parts of the nation, apart from the former homelands such as Transkei and KwaZulu, where they are very small in number. English Speaking whites are generally concentrated in KwaZulu-Natal, Johannesburg and major settlements in the Western and Eastern Capes. Other white groups (such as Portuguese and Germans) live mostly in Johannesburg or Cape Town. In the former homelands, the white populations are so tiny, that even the slightest population can affect how Afrikaans or English-speaking they are. Of the largest cities in the country, Johannesburg, Cape Town, Durban, East London and Pietermartizburg are largely English-speaking in the core, while Pretoria, Bloemfontein, Kimberley, Polokwane, Nelspruit, Witbank and Rustenburg are predominantly Afrikaans. Port Elizabeth is largely mixed. 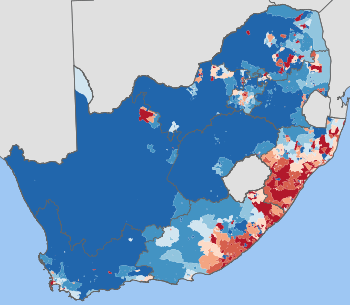 The Eastern cape has one of the lowest percentages of whites in South Africa, which is currently around 4.7%. They number just above 300,000. Similarly to the Limpopo province, whites as a percent of the population varies around the Eastern Cape. The East, where the former black designated homelands of Transkei and Ciskei are found, have both a high density of black people, and only a small number of whites. For example in the OR Tambo District Municipality, located in the former Transkei, only 0.1% of the 1.6 million inhabitants are white. On the other hand, in the west, Local Municipalities such as in the Cacadu District Municipality, contain white percentages exceeding 10%, with the highest being the Kouga Local Municipality, which stands at 25.4%. The largest white population centre is Port Elizabeth, which houses over half (170,000) of the Eastern Cape's white population. Other major white populations exist in East London, Grahamstown, Graaff-Reinet, and a number of smaller towns. The Eastern Cape houses the most equal mix of both English and Afrikaans speaking whites. The geographic background of the province shows a mix of English and Afrikaans place names, with no clear distinction between where Afrikaners or English-Speakers live.

The Afrikaners far outnumber white Anglo-Africans in the Free State (formerly called the Orange Free State), because English immigration to the region was very limited. They are predominant in practically all cities, and in many farms. The Afrikaner population is biggest around Bloemfontein, which currently holds an estimated 100,000 white people (or a third of the total in the province). The white percentage has recently rebounded after prolonged decline. In 1880 the white percentage was 45.7% and 24 years later, this declined to 36.8% in 1904.[2] Despite a long and steady decline all through the 20th century, the 2007 Community Survey showed the white percentage of the Free State increased from 8.8% to 9.6%. There could be issues with this figure as overall the population of some municipalities decreased in population by up to 50%, which meant that the "missing" black people counted resulted in an increased white percentage. Major white populations are also found in cities such as Welkom, Kroonstad and Sasolburg.

Gauteng has both the highest percentage (18.4%) and number (just under 2 million) of white people compared to any of the other provinces. Afrikaans whites tend to be gathered in and around Pretoria (with around 450,000 Afrikaners), the East and West Rand, and in many other large cities. Anglo-Africans are mostly found in central Gauteng, namely Johannesburg and the East Rand. Also, the Midvaal Local Municipality, located in Gauteng, contains one of the highest percentage of whites in the country, which in 2007 stood at 35%.

Between Afrikaners and Anglo-Africans, KwaZulu-Natal is the only province where the vast majority of whites are English-speaking.[3] However, there do remain some towns in the north with large Afrikaner populations such as in the town of Vryheid. Before 1994 the province was just called Natal, and in the 1960 republic referendum, it was the only province to vote against severing links to the British Crown. KwaZulu-Natal, like most provinces, has experienced a both numerical and proportional decline in the white population. Over half of KwaZulu-Natal's white population lives in Durban and its surrounding suburbs.

The Limpopo province has the smallest percentage of white people than any other province in the country, which in 2007 stood at 2.2%. They are almost entirely Afrikaners. The white population is very unevenly spread. Some municipalities, especially in the more lightly populated west, have white percentages reaching far beyond 10% such as the Thabazimbi (23%), Bela-Bela (13%) and Mookgopong Local Municipality (21%). Conversley in the much more densely populated East (where the former homelands of Gazankulu, Lebowa and Venda lay), the white percentage drops significantly due to the high black population density. Some municipalities, including the Thumamela and Mutale Local Municipality have white populations of no more than 500, and therefore percentages reaching as low as 0.05%. The capital city, Polokwane (formerley Pietersburg), holds around 27,000 whites, making up just under a fourth of the province's white population. Other major white concentrations are in Phalaborwa, Thabazimbi, Louis Trichardt and practically every settlement along the N1 national road.

In 2007 roughly 6.7% of Mpumalanga was white. The majority of whites in Mpumalanga are Afrikaans-speaking. Approximately 250,000 whites live in Mpumalanga, with major population centres being the capital, Nelspruit and other large cities such as Witbank, Middelburg, Ermelo and Lydenburg.

The Northwest Province has an almost identical situation to that of Mpumalanga. There is a very strong and patriotic Afrikaner community, and the province is also the birthplace of the Afrikaner Weerstandsbeweging (AWB), which was created in Ventersdorp. There is an especially strong Afrikaner influence in the city of Potchefstroom. In 2007 there were 235,580 whites, making up roughly 7.2% (up from 6.7% in 2001) of the province's total population. The vast majority are Afrikaans-speaking.

The Northern Cape's small white population is also dominated by Afrikaners, with some English whites in cities such as Kimberley. Although the white population only number no more than 100,000, because the province is very sparsely populated, it means the white population has remained very much above 10%, even since 1994.[4] Roughly 25% of whites live in the Sol Plaatje Local Municipality, which contains the Diamond-mining city of Kimberley. Although only having about 12,000 white inhabitants, the Namakwa District Municipality, in the very sparse western Northern Cape, they still manage to make up over 11% of the District Municipality's population. Afrikaans is the Lingua Franca in the Northern Cape, because the majority of the province (mostly Coloureds) speak it as a first language. Only in the north-eastern areas are there more blacks than Coloureds, and as well as far fewer white people. Besides Kimberley, other important white concentrations are found in Upington, Britstown, Springbok, De Aar, Jan Kempdorp and Barkly West. Orania, a purpose-built town for only-Afrikaans-speaking whites, is also located in the east of the Northern Cape, bordering the Free State. It houses just over 1400 inhabitants and is a special case as it is the only "main-place"[5] where virtually all inhabitants are white. 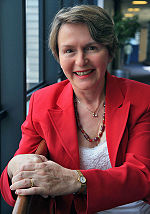 Helen Zille, the Premier of the Western Cape, is a White African of German descent.

The Western Cape has the second highest percentage of white people (18.4%) in South Africa, and the only one with a White premier (governor). However due to the fast declining percentage[6] of whites in Gauteng, the Western Cape now has the joint highest percentage of whites in South Africa. The lingua franca is Afrikaans, although some urban areas, especially Cape Town, have a large English speaking population. Many Cape Town suburbs and neighborhoods have white majorities, including some with a white population of 95% or greater including: Llandudno, Fish Hoek, Constantia, Parow and Noordhoek. The large coloured population in Oos-Kaap Provinsie speak mostly Afrikaans (80%) or English (20%). The Western Cape has some of the highest white percentage municipalities in South Africa, such as the Overstrand (33%), Cape Agulhas (23%), Mossel Bay (28%), Knysna (23%) and Hessequa (38%) to name a few.

This is an incomplete list of the "main places" (localities) in South Africa with a white population of more than 10,000. The data is taken from the 2001 census[7]

Here is a list of some of the biggest white populations by province.