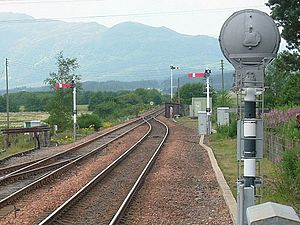 Semaphore stop signals protecting the convergence of two tracks into one

The application of railway signals on a rail layout is determined by various factors, principally the location of points of potential conflict, as well as the speed and frequency of trains and the movements they require to make.

Before discussing the application of signals, it is useful to highlight some situations where signals are not required:

Signals exist primarily to pass instructions and information to drivers of passing trains. The driver interprets the signal's indication and acts accordingly. The most important indication is 'danger', which means 'stop'. Not every signal is equipped with a 'danger' aspect.

Signals are provided where required to protect items of infrastructure where conflict may arise, including:

A signal cannot display a 'proceed' aspect unless the infrastructure item(s) that it protects are in the correct position for the passage of a train or, in the case of flat junctions and gauntlet track, no other signal is cleared for a conflicting move. This is enforced by interlocking.

Running lines (as distinct from sidings) are divided into sections. Under normal circumstances, only one train may occupy any section at a time. A signal is provided at the start of every section, which may only display a 'proceed' aspect when the section ahead is completely empty, at least as far as the next signal.

The length of the sections, and hence the distance between signals, determines the railway's capacity. A railway with short sections can accommodate more traffic than one with long sections.

The provision of signals is dependent on the intended use of the layout and the movements that are expected to take place. It is not necessary to provide a signal for every conceivable movement that the layout physically permits. If, during perturbed working, a movement has to be made in a direction for which no signal is provided, this can be done under special instruction. The same applies during signal failure.

A main signal controls a train movement along a running line. A 'proceed' aspect on a main signal indicates that the line is clear at least as far as the next signal, giving the driver confidence to run at speed. Trains running long distances, especially passenger trains, will usually travel throughout under the authority of a succession of main signals.

A shunting signal controls low speed movements where provision of a main signal is not appropriate, such as moves into sidings. Clearance of a shunting signal does not necessarily imply that the line ahead is clear of vehicles. Shunting signals are often mounted at ground level and are smaller than main signals, reflecting their status.

A stop signal is one that is equipped to show a 'danger' aspect, which commands an approaching train to stop. Its function is to prevent conflict with other trains and to indicate that moveable infrastructure features are in the correct position. Depending on the manner in which they are used, and the nomenclature favoured by the railway administration concerned, stop signals may be further categorised as 'home signals' or 'starting signals', for example.

A distant signal is one that cannot display a 'danger' aspect. It is however able to display a 'caution' aspect, which gives the driver advance warning that the stop signal ahead may be displaying 'danger'. The distant signal is installed roughly at full braking distance on approach to the stop signal to which it applies, taking into account the gradient, the permitted speed, and the braking performance of trains. On sighting a 'caution' aspect, the driver must prepare to stop at the signal ahead. If the distant signal shows a 'clear' aspect, the train may maintain full speed. A single signal may be equipped to function both as a stop signal and a distant signal.

The 'danger' aspect of an absolute stop signal means "stop and stay". It cannot be passed at 'danger' without authority from the signalman.

The 'danger' aspect of a permissive stop signal means "stop and proceed". The driver is permitted to pass the signal at 'danger' under his/her own authority in accordance with the rules, after first coming to a stand.

A subsidiary signal permits movements onto a portion of track that is already occupied. These are commonly used at terminal stations to permit two or more trains to enter a single platform.

The driver of a train approaching a diverging junction must be made aware of which direction the train will take, so that its speed can be regulated accordingly. A diverging route might have a significantly lower permissible speed than the main route, and if the route taken was not the one expected, it could result in derailment.

There are two different philosophies on junction signalling. Signalling of British origin generally conforms to the principle of route signalling. Most railway systems around the world, however, use what is known as speed signalling.

Under route signalling, a driver is informed of which route the train will take beyond each signal (unless only one route is possible). This is achieved by a 'route indicator' attached to the signal. The driver uses his route knowledge, reinforced by speed restriction signs fixed at the lineside, to drive the train at the correct speed for the route to be taken.

Under speed signalling, the driver is not told which route the train will take, but the signal aspect informs him at what speed he may proceed. Speed signalling requires a far greater range of signal aspects than route signalling, but less dependence is placed on drivers' route knowledge.

Many double or multiple track railways have a designated direction of travel assigned to each track. Signals will only be installed to permit traffic to flow in one direction on each line, i.e. uni-directional signalling.

Bi-directional signalling is easier to implement when under the control of one signal box. Before power-operated signalling became widespread, track layouts tended to be designed to avoid bi-directional arrangements as much as possible.

Single track railways must necessarily have signals for both directions. This is not regarded as 'bi-directional signalling'.

In a hump yard, special signals may control the speed of trains propelling vehicles towards the hump.

Signals may be installed to control the movement of freight trains through a facility for loading or unloading minerals, for example coal. Unlike ordinary signals, there may be a series of identical signals installed along the track so that at least one is always visible to the train driver at any time. All signals in the same group display the same indication simultaneously. A 'stop' indication means "stop immediately", even if the train is not at the signal. The signals can also instruct a train to reverse.