Dissolution of the Lesser Monasteries Act

Dissolution of the Lesser Monasteries Act 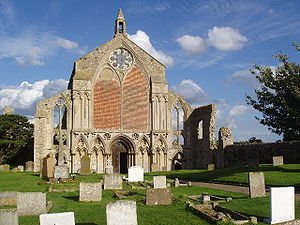 The ruins of Binham Priory in Norfolk, one of the houses suppressed under the Act

The Act for the Dissolution of the Lesser Monasteries – (citation 27 Henry VIII. c. 28) was an Act of the English Reformation Parliament of 1535/36, the beginning of the legal process by which King Henry VIII set about the Dissolution of the Monasteries. It is also referred to as the Suppression of Religious Houses Act 1535, as it was enacted in February 1535 Old Style.

From the 14th century onwards, several popes had granted licenses for the suppression of religious houses in England.[1]

The breakdown of relations between Henry VIII and the Church in Rome, prompted by his marriage to Anne Boleyn, resulted in the Statute in Restraint of Appeals of 1533, forbidding all appeals to the Pope in Rome on religious or other matters.[2] Pope Clement VII responded by announcing Henry's provisional excommunication, and the hostility between the king and the pope escalated.[3] In the words of John Burton's Monasticon Eboracense (1758) –

The casting off the Pope's Supremacy, and the Monks being looked on only as a sort of half-subjects, ever ready to join any foreign power, which should invade the nation, whilst the King [Henry VIII] was excommunicated by the Pope... together with the [former] alienation of the lesser houses, were urged for seizing the rest; to which the King's want of a large supply, and the people's willingness to save their own pockets, greatly contributed; and accordingly, a motion shortly after was made in Parliament, that, to support the King's state, and supply his wants, all the religious houses might be conferred upon the Crown, which were not able to expend clearly above 200l. per annum. This Act passed about March, A. D. 1535.[1]

Parliament met on 4 February 1535/36 and received a digest of the report Valor Ecclesiasticus, a visitation of the monasteries of England commissioned by the King, and soon after passed the Act.[4]

The Act applied only to lesser houses "which have not in lands, tenements, rents, tithes, portions, and other hereditaments, above the clear yearly value of two hundred pounds", attacking such houses as dens of iniquity and proposing that those in them should be "committed to great and honourable monasteries of religion" and "compelled to live religiously".[5]

The preamble of the Act states -

The main effect of the Act was to expropriate the lesser religious houses to the King, who (in the words of the Act) "shall have to him and to his heirs all and singular such monasteries, abbeys, and priories, which at any time within one year next before the making of this Act have been given and granted to his majesty by any abbot, prior, abbess, or prioress, under their convent seals, or that otherwise have been suppressed or dissolved... to have and to hold all and singular the premises, with all their rights, profits, jurisdictions, and commodities, unto the king's majesty, and his heirs and assigns for ever, to do and use therewith his and their own wills, to the pleasure of Almighty God, and to the honour and profit of this realm".[5]

This section includes a retrospective effect, regularizing suppressions of houses which had already taken place.