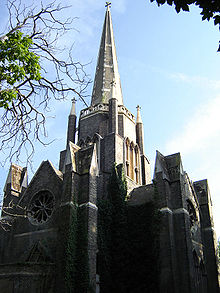 Abney Park Chapel (1840) is an example of Dissenting Gothic architecture.

Dissenting Gothic is a distinctive style of neo-Gothic architecture in its own right that emerged primarily in Britain, its colonies and North America, during the nineteenth century "Gothic Revival".[1].

In contrast to the pure copying of English mediaeval Gothic that was being advocated and promoted by some influential ecclesiologists during the early Gothic Revival period in Britain, most particularly by Augustus Welby Pugin and to an extent in the pages of the Camden Society's quarterly journal (The Ecclesiologist, 1841-68), Dissenting Gothic provided a less Anglo-centric interpretation of the Gothic style, and purposefully introduced modernising elements to meet clients' needs.

In Dissenting Gothic the interests of good design could over-ride historical purity; the role of the architect was seen as originating a design solution, rather than promoting specific Gothic forms as a cause celebre in pursuit of an idealised high-church and mediaeval belief system.

Departing from the narrow confines of the approach adopted by some of the leading British ecclesiologists' during the early Gothic Revival period, architects who were willing to respond to the demand for Dissenting Gothic enlarged their portfolio, drawing on mainland European Gothic architecture as well as English forms [2]. Moreover they could be more creative about relationship between form and function, seeking novel but appriopriate ways to introduce elements not found in mediaeval Gothic churches, so as to create interiors that met the particular congregational needs of the independent or nonconformist chapel-builders of the nineteenth century [3]; accommodate Sunday Schools and meeting rooms, with sometimes distorting effects on the physiognomy of the building; use confined city plots in efficient ways by varying from strict gothic floorplans and orientations; and experiment with a wide range of materials, and polychromatic designs, not found in mediaeval buildings.

Although the earliest examples of Dissenting Gothic were commissioned by trustees of independent churches and chapels at about the same time as the beginnings of the purist AngloCatholic-dominated Gothic Revival movement - namely during the second quarter of the nineteenth century - the latter so profoundly dominated and led this early period of 'Gothic Revival' that there were relatively few examples in Britain or elsewhere of Dissenting Gothic before the third quarter of the nineteenth century.

This limited use of Dissenting Gothic in the early Gothic Revival period of the second quarter of the nineteenth century, reflected a marked reluctance by trustees and sponsors of independently funded and managed churches or chapels (in Britain, commonly referred to as 'nonconformist' churches or chapels) to commission neo-Gothic whilst the ecclesiologists were portraying it as ‘high church’ architecture. Equally, there was a refusal by some 'Gothic Revival' architects to accept commissions for ‘low church’ buildings - nonconformist chapels and the like. For philosophical reasons, some architects in the early 'Gothic Revival' period considered that the style should remain the exclusive preserve of the ‘high church’.

By the mid-nineteenth century these early controversies had weakened. In England, the case for commissioning neo-Gothic designs for nonconformist chapels was persuasively argued by the trained architect and Wesleyan Methodist minister, Frederick James Jobson (commonly styled, F. J. Jobson), in his book Chapel and School Architecture (1850); and in America by the Rev. George Bowler's publication setting out examples of elevations and floorplans for nonconformist churches in the Gothic revival style [4].

By now it was becoming fashionable to adopt neo-Gothic for artistic reasons and intrinsic appeal alone, superseding its early associations with ‘high church’ buildings and their clients. Also, for more prosaic reasons, ‘'Dissenting Gothic'’ began to become commonplace from the mid-nineteenth century onwards; by this date the trustees of independent chapels could more easily afford the high building costs associated with the neo-Gothic style. For example, in Britain the 1851 census recorded, for the first time, a greater number of people attending independent chapels than Anglican churches; the higher level of philanthropic donations and membership fees this provided, could now become reflected in more costly building designs.

By the time the Gothic Revival had matured into a commonly accepted building style for all manner of building types (referred to as the "High Victorian Gothic" period (1855–85) in Britain), the influence of the ecclesiologists with their vision of neo-Gothic as befitting only high church buildings and favouring only pure 'English Gothic' forms with historically correct mediaeval detail, had passed by. This later 'Gothic Revival' period saw a willingness to innovate by many influential architects, reflecting the success of the less narrow approach of Dissenting Gothic. The architect James Cubitt embodied such forward-looking principles in his book, Church Design for Congregations (1870), in which he noted the unsuitability of the conventional Gothic plan for nonconformist chapels, adding "there is every reason why our churches should be fitted for their destined use. It is not enough that they can be used...." His book gave further encouragement to looking at models besides traditional 'English Gothic', referring for example, to designs from Santa Sophia, Torcello, Gerona and Cologne.

Amongst these, northern European Brick Gothic was perhaps the best known alternative to English styles at that time; partly on account of its lower cost than stone blocks, but also its appeal to a section of nonconformist though to whom highly extravagant and ornamented building styles and monuments were either too vulgar, or associated with mediaeval superstition - Spurgeon cautioned against the Gothic fashion leading to "hobgoblins and monsters on the outside of their preaching houses"[5].

As the nineteenth century wore on, Dissenting Gothic became widespread not only as old chapels were rebuilt, but also amongst the new city suburbs that were being established in England and elsewhere. for example, as [7] notes: "'Dissenting Gothic' was the style in Bowden, 'Manchester's most relaxed suburb'". Nonetheless its appeal amongst independents or nonconformists was not universal. The Baptists, quite unlike the Wesleyan Methodists and most notably the Unitarians, did not come to a generally accepted accommodation of the neo-Gothic style [8] and indeed Spurgeon advanced the idea that the Grecan style was most appropriate for church buildings because the New Testament was written in Greek. His London Metropolitan Tabernacle of 1861 dramatically illustrated this alternative view [9].

Fine examples of Dissenting Gothic include: