Margaliot (Hebrew: מַרְגָּלִיּוֹת‎‎; Arabic: هونين‎) is a moshav in the Upper Galilee in northern Israel, located along the border with Lebanon, near the town of Kiryat Shmona. It is part of the Mevo'ot HaHermon Regional Council. The settlement is home to approximately 400 residents, most of them Jews of Iranian Kurdistan descent. 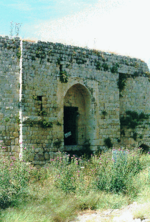 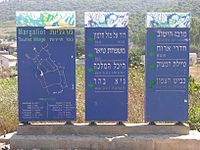 Margaliot was established in 1951 on the site of the Lebanese town of Hunin, which is part of the Seven Lebanese Villages across the Lebanese/Israeli border, by Jewish immigrants from Yemen and Iraq. The moshav was renamed after Chaim Margaliot Kalverisky, who headed the Jewish Colonization Association in the Galilee in the early twentieth century, and participated in the establishment of several Jewish settlements in the area. Today, neighboring Arab states (especially Lebanon), use the name Hunin to refer to the area covering moshav Margaliot and kibbutz Misgav Am.

Château Neuf (New Castle), a Crusader fortress, is situated by the road leading to the moshav. Château Neuf provides a clear view of the Nimrod Fortress and several other fortresses in the area.[which?] The Syria-Lebanon-Palestine boundary was a product of the post-World War I Anglo-French partition of Ottoman Syria.[2][3] British forces had advanced to a position at Tel Hazor against Turkish troops in 1918 and wished to incorporate all the sources of the Jordan River within British controlled Palestine. Following the Paris Peace Conference of 1919, and the unratified and later annulled Treaty of Sèvres, stemming from the San Remo conference, the 1920 boundary extended the British controlled area to north of the Sykes Picot line, a straight line between the mid point of the Sea of Galilee and Nahariya. The international boundary between Palestine and Lebanon was finally agreed upon by Great Britain and France in 1923, in conjunction with the Treaty of Lausanne, after Britain had been given a League of Nations mandate for Palestine in 1922.[4]

In April 1924, Hunin, along with seven other villages, and an estimated 20 other settlements, were transferred from the French Mandate of Lebanon to the British mandate of Palestine by France. Margaliot (Hunin) was claimed by Britain's Zionist allies; while, after the independence of Lebanon, the new Lebanese government asked for the return of this village and the rest of the villages and settlements. As of today, the Lebanese government still demands the return of these lands.[5][6]

Hunin was a Shi'ite Muslim village with a population of 1620 recorded in 1945.[7] A Palmach raid in May 1948 led to many of the inhabitants fleeing to Lebanon, leaving 400 remaining in the village. During a meeting in August 1948, when only 400 villagers remained in Hunin, the mukhtars of Hunin and some other Shi'ite villages met with the Jews of kibbutz Kfar Giladi to try to make a peace agreement with the state of Israel. They promised to live as loyal citizens (minority under Jewish rule) and renounce Arab national aspirations. With the support of the local Jews, a report was made by the Department of Minorities recommending that such an agreement be reached with the 4,700 or so Shi'ites in the region to promote friendly relations with southern Lebanon, to take advantage of the Shi'ites' poor relationship with the majority Sunnis, and to enhance the prospect of a future extension of the border.[7] This proposal was not accepted, despite the support of the minorities minister Bekhor Shitreet.[7]

In August, more inhabitants of Hunin were forced to flee by the IDF.[8] On September the 3rd 1948, the IDF raided the village blowing up 20 houses, killing a son of the mukhtar and 19 others and expelling the remaining villagers.[8]