Seed dispersal is the movement or transport of seeds away from the parent plant. Plants have limited mobility and consequently rely upon a variety of dispersal vectors to transport their propagules, including both abiotic and biotic vectors. Seeds can be dispersed away from the parent plant individually or collectively, as well as dispersed in both space and time. The patterns of seed dispersal are determined in large part by the dispersal mechanism and this has important implications for the demographic and genetic structure of plant populations, as well as migration patterns and species interactions. There are five main modes of seed dispersal: gravity, wind, ballistic, water and by animals. Some plants are serotinous and only disperse their seeds in response to an environmental stimulus.

Seed dispersal is likely to have several benefits for plant species. First, seed survival is often higher away from the parent plant. This higher survival may result from the actions of density-dependent seed and seedling predators and pathogens, which often target the high concentrations of seeds beneath adults.[1] Competition with adult plants may also be lower when seeds are transported away from their parent.

Seed dispersal also allows plants to reach specific habitats that are favorable for survival, a hypothesis known as directed dispersal. For example, Ocotea endresiana (Lauraceae) is a tree species from Latin America which is dispersed by several species of birds, including the three-wattled bellbird. Male bellbirds perch on dead trees in order to attract mates, and often defecate seeds beneath these perches where the seeds have a high chance of survival because of high light conditions and escape from fungal pathogens.[2] In the case of fleshy-fruited plants, seed-dispersal in animal guts (endozoochory) often enhances the amount, the speed, and the asynchrony of germination, which can have important plant benefits .[3]

Seeds dispersed by ants (myrmecochory) are not only dispersed to short distances but are also buried underground by the ants. These seeds can thus avoid adverse environmental effects such as fire or drought, reach nutrient-rich microsites and survive longer than other seeds.[4] These features are peculiar to myrmecochory, which may thus provide additional benefits not present in other dispersal modes.

Finally, at another scale, seed dispersal may allow plants to colonize vacant habitats and even new geographic regions.[5]

Gravity is a simple means of achieving seed dispersal. The effect of gravity on heavier fruits causes them to fall from the plant when ripe. Fruits exhibiting this type of dispersal include apples, coconuts and passionfruit and those with harder shells often roll away from the plant to gain further distance. Gravity dispersal also allows for later transmission by water or animal.[6] 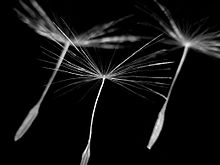 Wind dispersal is one of the more primitive means of dispersal. Wind dispersal can take on one of two primary forms: seeds can float on the breeze or alternatively, they can flutter to the ground.[7] The classic examples of these dispersal mechanisms include dandelions, which have a feathery pappus attached to their seeds and can be dispersed long distances, and maples, which have winged seeds (samara) and flutter to the ground. An important constraint on wind dispersal is the need for abundant seed production to maximise the likelihood of a seed landing in a site suitable for germination. There are also strong evolutionary constraints on this dispersal mechanism. For instance, Cody and Overton (1996) found that species in the Asteraceae on islands tended to have reduced dispersal capabilities (i.e., larger seed mass and smaller pappus) relative to the same species on the mainland.[8] Reliance on wind dispersal is common among many weedy or ruderal species. Unusual mechanisms of wind dispersal include tumbleweeds.

Many aquatic (water) and some terrestrial (ground) plant species use hydrochory, or seed dispersal through water. Seeds can travel for extremely long distances, depending on the specific mode of water dispersal.

The water lily is an example of such a plant. Water lilies' flowers make a fruit that floats in the water for a while and then drops down to the bottom to take root on the floor of the pond.[9] The seeds of palm trees can also be dispersed by water. If they grow near oceans, the seeds can be transported by ocean currents over long distances, allowing the seeds to be dispersed as far as other continents. This is the road the palm trees use to move its seeds (coconuts) to their new home..

Mangrove trees live right in the water. Their seeds fall from the tree and grow roots as soon as they touch any kind of soil. During low tide, they might fall in soil instead of water and start growing right where they fell. If the water level is high, however, they can be carried far away from where they fell. Mangrove trees often make little islands as dirt and other things collect in their roots, making little bodies of land.[10] 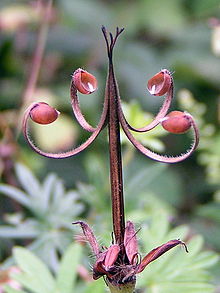 Showing the "bill" and seed dispersal mechanism of Geranium pratense

Self-dispersal, or autochory, is the physical and often explosive discharge of seeds from the fruit. The seeds are typically ejected from the fruit by elastic contraction of the fruit tissues and often the fruits are shaped such that seeds are flung away from the parent plant.[11] While ballistic dispersal does not often achieve the same distance as animal-dispersed seeds, many ballistic dispersed seeds also have a form of secondary dispersal.[12] Some common examples of species employing ballistic dispersal include the aptly named Touch-me-nots (Impatiens spp., Balsaminaceae) whose fruits explosively dehisce and squirting cucumbers (Ecballium elaterium, Cucurbitaceae) that discharge their seeds in a mucilaginous stream of liquid.

Geranium species have a fruit capsule of five cells which end in cups that hold the seed. The cups are joined to a long beak-like column, and when the fruit is ripe, it springs open casting away the seeds like a catapult. 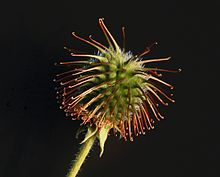 Notice the small hooks on the surface of a bur, this enables attachment to animal fur for dispersion. 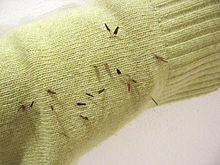 Epizoochory in Bidens tripartita; the seeds have attached to the clothes of a human.

Animals can disperse plant seeds in several ways. Seeds can be transported on the outside of vertebrate animals (mostly mammals), a process known as epizoochory. Plant species transported externally by animals can have a variety of adaptations for dispersal, including adhesive mucus, and a variety of hooks, spines and barbs.[13] A typical example of an epizoochorous plant is Trifolium angustifolium, a species of Old World clover which adheres to animal fur by means of stiff hairs covering the seed.[14] Epizoochorous plants tend to be herbaceous plants, with many representative species in the families Apiaceae and Asteraceae.[13] However, epizoochory is a relatively rare dispersal syndrome for plants as a whole; the percentage of plant species with seeds adapted for transport on the outside of animals is estimated to be below 5%.[13] Nevertheless, epizoochorous transport can be highly effective if seeds attach to wide-ranging animals. This form of seed dispersal has been implicated in rapid plant migration and the spread of invasive species.[14]

Seed dispersal via ingestion by vertebrate animals (mostly birds and mammals), or endozoochory, is the dispersal mechanism for most tree species.[15] Endozoochory is generally a coevolved mutualistic relationship in which a plant surrounds seeds with an edible, nutritious fruit as a good food for animals that consume it. Birds and mammals are the most important seed dispersers, but a wide variety of other animals, including turtles and fish, can transport viable seeds.[16] The exact percentage of tree species dispersed by endozoochory varies between habitats, but can range to over 90% in some tropical rainforests.[15] Seed dispersal by animals in tropical rainforests has received much attention, and this interaction is considered an important force shaping the ecology and evolution of vertebrate and tree populations.[17] In the tropics, large animal seed dispersers (such as tapirs, chimpanzees and hornbills) may disperse large seeds with few other seed dispersal agents. The extinction of these large frugivores from poaching and habitat loss may have negative effects on the tree populations that depend on them for seed dispersal.[18]

Seed dispersal by ants (myrmecochory) is a dispersal mechanism of many shrubs of the southern hemisphere or understorey herbs of the northern hemisphere.[4] Seeds of myrmecochorous plants have a lipid-rich attachment called the elaiosome, which attracts ants. Ants carry such seeds into their colonies, feed the elaiosome to their larvae and discard the otherwise intact seed in an underground chamber.[19] Myrmecochory is thus a coevolved mutualistic relationship between plants and seed-disperser ants. Myrmecochory has independently evolved at least 100 times in flowering plants and is estimated to be present in at least 11 000 species, but likely up to 23 000 or 9% of all species of flowering plants.[4] Myrmecochorous plants are most frequent in the fynbos vegetation of the Cape Floristic Region of South Africa, the kwongan vegetation and other dry habitat types of Australia, dry forests and grasslands of the Mediterranean region and northern temperate forests of western Eurasia and eastern North America, where up to 30-40% of understorey herbs are myrmecochorous.[4]

Seed predators, which include many rodents (such as squirrels) and some birds (such as jays) may also disperse seeds by hoarding the seeds in hidden caches.[20] The seeds in caches are usually well-protected from other seed predators and if left uneaten will grow into new plants. Finally, seeds may be secondarily dispersed from seeds deposited by primary animal dispersers. For example, dung beetles are known to disperse seeds from clumps of feces in the process of collecting dung to feed their larvae.[21]

Dispersal by humans used to be seen as a form of dispersal by animals. Recent research points out that human dispersers differ from animal dispersers by a much higher mobility based on the technical means of human transport.[22] Dispersal by humans on the one hand may act on large geographical scales and lead to invasive species. On the other hand dispersal by humans also acts on smaller, regional scales and drive the dynamics of existing biological populations. Humans may disperse seeds by many various means and some surprisingly high distances have been repeatedly measured. Examples are: dispersal on human clothes (up to 250m),[23] on shoes (up to 5 km)[22] or by cars (regularly ~ 250m, singles cases > 100 km).[24]

Seed dispersal has many consequences for the ecology and evolution of plants. Dispersal is necessary for species migrations, and in recent times dispersal ability is an important factor in whether or not a species transported to a new habitat by humans will become an invasive species.[25] Dispersal is also predicted to play a major role in the origin and maintenance of species diversity. For example, myrmecochory increased the rate of diversification more than twofold in plant groups in which it has evolved because myrmecochorous lineages contain more than twice as many species as their non-myrmecochorous sister groups.[26] Dispersal of seeds away from the parent organism has a central role in two major theories for how biodiversity is maintained in natural ecosystems, the Janzen-Connell hypothesis and recruitment limitation.[1] Seed dispersal is essential in allowing forest migration.