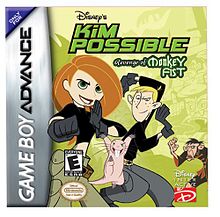 Disney's Kim Possible: Revenge of Monkey Fist, the first game in the series, was developed by Digital Eclipse Software and published by Disney Interactive Studios. Every game afterward was released by the same publisher, but developed by Artificial Mind and Movement.

Disney's Kim Possible: Revenge of Monkey Fist was released for the GBA on November 15, 2002, in North America. Doctor Drakken and Monkey Fist have kidnapped Ron, forcing Kim to locate Doctor Drakken's secret headquarters and rescue Ron. The game places the player in the role of Kim. The Bebes and Gill are also enemies in the game.

Disney's Kim Possible 2: Drakken's Demise was released for the GBA on September 22, 2004, in North America and on July 21, 2005, in Japan. The game was developed by Artificial Mind and Movement and published by Disney Interactive Studios. The game places the player in the role of Kim to defeat Doctor Drakken, Shego, Duff Killigan, Gemini, and Falsetto Jones. Drakken's Demise is divided into four "episodes", most of which are sequels to episodes in the show's second season. The first episode, True or Falsetto?, Falsetto Jones breaks out of prison and stages a theft to get revenge on Kim Possible for foiling his previous crime in Rufus in Show. In Altitude Attitude, Duff Killigan steals a weather machine and hides it in the mountains. Fortunately, he forgot to steal the instructions, too. This is similar to the TV episode Job Unfair, but also has the "Killer Snowmen" from Day of the Snowmen.

In The "Rufus" Factor, Ron asks Kim to help him find Rufus, who has been kidnapped by Gemini. This is a reference to the "Rufus Factor" epologue in The Ron Factor. The last episode, Day of the Destructo-Bots, Drakken finishes his destructo-bots from Car Trouble and sends them on a rampage through Middleton. Kim has to stop them before her date with Josh Mankey. Naturally, Drakken doesn't make it easy, and neither does Shego, whom Kim must fight as well.

Disney's Kim Possible 3: Team Possible was released for the GBA on July 26, 2005, in North America. Kim and Ron has teamed up to form Team Possible, to defeat Doctor Drakken, Shego, and other super villains. The game places the player in the role of Kim or Ron. Kim Possible 3 is the first game where Ron Stoppable is a playable character. Throughout the game, both characters must work together to advance through the game, as Kim may not be able to reach an area that Ron can. The game can be played with two players over a link cable connection; if this is not available, the player can toggle each character. The other character has no AI and will not move when the player is not controlling him or her.

Disney's Kim Possible: What's the Switch? was released in North America on October 19, 2006, in Europe on November 17, 2006, and in Australia on February 15, 2007. It is the first Kim Possible game to appear on a home console, as all the other Kim Possible games were designed for hand-held systems. The subtitle is a pun on one of Kim's catchphrases. It is also the first to feature voice acting, all the actors voice their characters. The game was featured in a demo on Official Playstation Magazine's demo disc issue 111. Both Kim and Shego are playable characters. In each stage, control is relayed between the two of them as they chase Dementor and Monkey Fist around the world. Rufus is also playable at certain points in the game, but only when playing with Kim.

Teen heroine Kim Possible and sidekick Ron Stoppable arrive at Monkey Fist's castle to stop villains Dr. Drakken and Shego from stealing a magical Monkey Idol. However, when the two teams fight over the Idol, Ron and Drakken get their minds switched with each other's bodies. Before Kim or Shego can do anything, Professor Dementor appears and steals the Idol himself. Realizing that she needs the Idol to switch Ron and Drakken back to normal, Kim takes off in pursuit, unaware that Shego is also on the trail. As a result, the two girl's paths cross continuously, ultimately forcing the two rivals to team up and stop Dementor, who has partnered with Monkey Fist in an all-new scheme.

Disney's Kim Possible: Kimmunicator was released for the DS on November 9, 2005, in North America. After Doctor Drakken kidnaps Wade, Kim needs the player's help to rescue Wade and stop Drakken's plan to build yet another Doomsday Device. The game places the player in the role of Wade's replacement.

Disney's Kim Possible: Global Gemini was released for the DS in North America on February 13, 2007. It is the last Kim Possible video game. Both Kim and Ron are playable in this game. Whereas Kim is more capable of physical movement and direct combat, Ron is more gadget-oriented. Kim Possible and her faithful sidekick Ron Stoppable have been summoned by the world protection group Global Justice to rescue their leader, Dr. Director, who is currently being held hostage by her archenemy (and twin brother) Sheldon, alias Gemini. Team Possible sets off to stop Gemini's evil secret organization, the Worldwide Evil Empire (WEE), as well as deal with Motor Ed and Adrena Lynn, both of whom have been broken out of prison by Gemini to aid in his grand plan.