Discrimination in the United States

Discrimination in the United States

Discrimination, according to Merriam Webster’s dictionary, is the process by which two stimuli differing in some aspect are responded to differently.[1] This term is used to highlight the difference of treatment between members of different groups when one group is intentionally singled out and treated worse, or not given the same opportunities. As attitudes towards minorities started to change the term discrimination came to be used to talk about the issue. Over the years many forms of discrimination have come to be recognized including racial, gender, and sexual orientation. 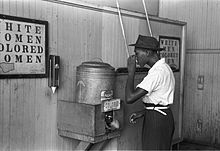 Picture showing that most public places were segregated.

In the 1800s the slaves were freed by President Lincoln. After this starting in about the 1870s Jim Crow laws were introduced. These laws promoted the idea separate but equal, meaning that the races although having to be in different areas and not allowed to intermingle were equal. The mixing of races was illegal in most places public schools, public transportation and eating establishments.[1] These laws increased discrimination, while the idea was separate but equal the black schools were not as advanced and didn’t have good supplies. Overall the areas where African Americans were designated to do daily activities were always of poorer quality than that of their white counterparts. Discrimination was blatantly done one example of this is in the case of Rosa Parks. In her area of the country it was customary to move to the back of the bus or give up your seat for a white person. Laws like these existed all over America. The court case Brown v. Board of Education of Topeka made people realize that there was no such thing as separate but equal. By separating races and saying that it was wrong for them to interact showed that they thought something was wrong with one of the races. The Supreme Court decided that separate but equal was no longer necessary in 1954. Racial discrimination was not only used by adults but children as well thought that races should not interact with one another. An example of this is the experiences Ruby Bridges had when she was one of the first black children to be "integrated" into an all white school. While discrimination in America has come a long way , today we still face the problem just in directed at different people.

During this hard time where race became a problem performing even minor daily tasks several people took it upon themselves to fix the system that was holding them down. Figures such as Martin Luther King Jr., Malcolm X, and Rosa Parks[1] are just a few to fight back against the race based discrimination of their era. Rosa Parks took a minor stand it seemed like at the time. She decided not to get up and move to the back of the bus when a white person asked her for her seat. This one incident sparked a huge movement called the Montgomery Bus Boycott. This one act against discrimination eventually leads to the laws on discrimination buses to be changed. Martin Luther King Jr. A peaceful activist lead many protests such as these, proving to the white society that was discriminating against them that they were a valuable part of society as well. King organized many protests that not only blacks but whites also attended. Eventually as was seen with the Brown v. Board of Education of Topeka the courts decided that it was a time to end racial discrimination. While King[1] organized peaceful protests Malcolm X went a different route. He and his main supporters The Nation of Islam wanted nothing to do with white people. They can be considered examples of reverse discrimination in this case because they discriminated against whites, the same way whites discriminated against blacks. Even though Malcolm X’s actions were radical he is still considered one of the pioneers in fighting back against racial discrimination.Ruby Bridges is an example of a child who dealt with discrimination. She dealt with parents as well as students constantly verbally abusing her. Most parents took their child out of the class because they didn't want their children near her. But rather than switching back to her old school she persevered and stayed. Eventually the parents sent their children back, accepting the fact that she wasn't leaving. Ruby Bridges showed that people will not accept inequality and they will actively fight back against discrimination no matter what age.[1] These examples show that with determination discrimination can be fought. If the discrimination being faced today was actively fought against the way race based discrimination was, the government would take notice and pass laws to stop the discrimination.

Gender discrimination is another form of discrimination. Despite the Women’s rights movement women are still held back in the work place. An example of this is the glass ceiling,[1] this is where women and often minorities are held down in the work place never advancing past a certain point. Women are often seen as an expense to their employers because they take days off for children, need time off for maternity leave and are stereotyped as “more emotional”. The theory that goes hand in hand with this is known as the Glass Escalator[1] while women are being held down in male dominated professions, men often rise quickly to positions of authority in fields with mostly women professionals. Men are pushed forward into management positions, even surpassing women who have been at the job longer and with more experience in the field. Not only in work settings but we see examples of this in our government as well. There has never been a female president and many did not vote for her because she seemed to cold, but when she did show emotion people thought she wouldn’t be able to handle the job. Double standards are consistently applied so that women are held down by discrimination.

Discrimination Based on Sexual Orientation

Another type of discrimination is against homosexuals. For personal reasons employers think it is okay to not hire these people. Homosexual people have been attacked and protested against. One topic of controversy related to homosexuals is marriage, while some states say it’s okay others have laws against it. There has been a rise in violence[1] against homosexual people proving that they are being discriminated against. Recently laws have gone into place to protect them and avoid violent protests, as well as hate crimes against them. Discriminating someone because of their sexual orientation is not only wrong but keeps us as a country from moving forward. 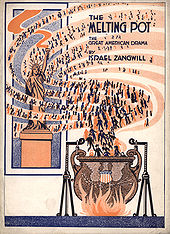 People who migrate to this country are affected by a totally separate type of discrimination. Some people feel as though the large amounts of people being allowed into the country are cause for alarm, therefore discriminate against them. Looking for someone to blame for an increase in violence immigrants are constantly targeted as bringing crime to America. [1] Arizona recently passed a law that forces people to carry documents with them at all times to prove their citizenship. This is only one controversy over immigrants in America, another is that immigrants are stealing “true Americans” jobs. Discrimination against immigrants like discrimination against sexual orientation is a problem. Violent hate crimes have increased[1] drastically.