Discovery Bay Coastal Park is a 104.6 km2 linear protected area of coastal land in western Victoria, south-eastern Australia. It extends along the coast of Discovery Bay from Cape Nelson north-westwards for 50 km to the border with South Australia. It lies within the traditional lands of the Gunditjmara people. The route of the Great South West Walk passes through the park, which is listed on Australia’s Register of the National Estate.[1]

After being recommended as a coastal reserve in 1973 by Victoria’s Land Conservation Council, the park was first included in Schedule 3 of the Victorian National Parks Act in 1979, with an area of 84.5 km2. Additional parcels of land were acquired in 1981, 1987 and 1997.[1]

Geologically the area is basalt overlain by limestone with the coastal landforms characterised by the rugged cliffs and headlands of Cape Nelson and Cape Bridgewater, dunefields, and by swamps and freshwater lakes further inland. The limestone contains mammalian fossil deposits of Pleistocene age.[1] 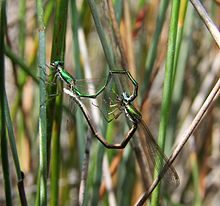 Some 320 native vascular plant species have been recorded in the park. An important wetland is Long Swamp, fed by a groundwater aquifer, where declining water levels have led to encroachment by Bare Twig-Sedge (Baumea sp.) whose seeds are a favoured food of the Ground Parrot. As water levels continue to decline, Woolly Tea-tree is beginning to colonise formerly sedge-dominated areas.[1] The swamp’s sedge habitat is also an important site for an endangered damselfly, the Ancient Greenling.[2]

The park forms much of the Discovery Bay to Piccaninnie Ponds Important Bird Area, identified by BirdLife International as being of global significance for several bird species.[3] Two threatened birds, the Hooded Plover and Little Tern, nest on the beaches. The Ground Parrot, Australasian Bittern and Brolga frequent the wetlands while the Orange-bellied Parrot, Rufous Bristlebird, Striated Fieldwren and Beautiful Firetail have been recorded in the dunes and shrublands. Threatened fish species, include the Yarra Pygmy Perch and Dwarf Galaxias. Mammals found in the park include the Long-nosed Potoroo, Heath Mouse and Swamp Antechinus. There are Australian Fur Seal colonies on rock platforms at Capes Nelson and Bridgewater.[1]