Electronic flight control systems (EFCS) also provide augmentation in normal flight, such as increased protection of the aircraft from overstress or providing a more comfortable flight for passengers by recognizing and correcting for turbulence and providing yaw damping.

Two aircraft manufacturers produce commercial passenger aircraft with primary flight computers that can perform under different flight control modes (or laws). The most well-known are the Normal, Alternate, Direct and Mechanical Laws of the Airbus A320-A380.[1]

Boeing's fly-by-wire system is used in the Boeing 777, Boeing 787 Dreamliner, and Boeing 747-8 Freighter.[2] Boeing also has a passenger variant of the 747-8, the 747-8 Intercontinental which is still under development, and will too use fly-by-wire controls.[3]

These newer generation of aircraft use the lighter weight electronic systems to increase safety and performance while lowering aircraft weight. Since these systems can also protect the aircraft from overstress situations, the designers can therefore reduce over-engineered components, further reducing weight.

Aircraft designers have created a set of flight control modes that include redundant electronics to safeguard against system failures. Failures can occur singly or combined to render systems inoperable. Pilots must be able to control the aircraft with some, or even none, of the computational electronics functioning. In the case of Airbus the back-ups are the direct and mechanical modes. Boeing's direct mode removes many of the computational 'limitations'.

Another function of flight control laws is to assess the performance of the aircraft under various conditions, such as takeoff, landing or normal cruise when flight control computers partially or completely fail. Designers build in the ability to by-pass the computers or for the standby systems to operate without the computers. 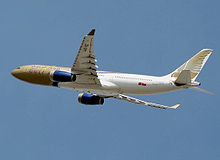 Airbus aircraft designs after the A300/A310 are almost completely controlled by fly-by-wire equipment. These newer aircraft, including the A320, A330, A340, A350 and A380 operate under Airbus flight control Laws.[4] The flight controls on the Airbus A330, for example, are all electronically controlled and hydraulically activated. Some surfaces, such as the rudder, can also be mechanically controlled. While in normal flight the computers act to prevent excessive forces in the pitch and roll.[4] 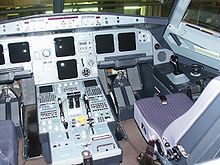 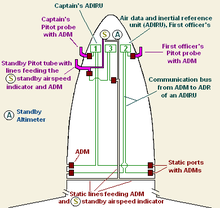 Illustration of the Air-data reference system on Airbus A330

The aircraft is controlled by three primary control computers (Captain's, First Officer's and Standby) and two secondary control computers (Captain's and First Officer's). In addition there are two Flight Control Data Computers (FCDC) that read information from the sensors, such as air data (airspeed, altitude). This is fed along with GPS data, into three redundant processing units known as Air Data Inertial Reference Units (ADIRUs) that act both as an air data reference and inertial reference. ADIRUs are part of the air data inertial reference system, which, on the Airbus is linked to eight air data modules: three are linked to pitot tubes and five are linked to static sources. Information from the ADIRU is fed into one of several flight control computers (Primary and secondary flight control). The computers also receive information from the control surfaces of the aircraft and from the pilots aircraft control devices and autopilot. Information from these computers is sent both to the pilot's primary flight display and also to the control surfaces.

There are four named flight control laws, however Alternate Law consists of two modes, Alternate Law 1 and Alternate Law 2. Each of these modes have different sub modes: ground mode, flight mode and flare, plus a back-up Mechanical Law.[4]

Normal Law differs depending on the stage of flight. These include:

The aircraft behaves as in direct mode: The autotrim feature is turned off and there is a direct response of the elevators to the sidestick inputs. The horizontal stabilizer is set to 4° up but manual settings (e.g. for center of gravity) override this setting. After the wheels leave the ground, a 5 second transition occurs where Normal Law - flight mode takes over from ground mode.[4]

Unlike conventional controls, in Normal Law flight mode the sidestick provides a load factor proportional to stick deflection which is independent of aircraft speed. When the stick is neutral and the load factor is 1g the aircraft remains in level flight without the pilot changing the elevator trim. The aircraft also maintains a proper pitch angle once a turn has been established, up to 33° bank. The system prevents further trim up when the angle of attack is excessive, the load factor exceeds 1.3g or when the bank angle exceeds 33°.

This mode is automatically engaged when the radar altimeter indicates 100 feet above ground. At 50 feet the aircraft trims the nose slightly down. During the flare, Normal Law provides high-AOA protection and bank angle protection. The load factor is permitted to be from 2.5g to -1g, or 2.0g to 0g when slats are extended. Pitch attitude is limited to +30 to -15° which is reduced to 25° as the aircraft slows.[4]

There are four reconfiguration modes for the Airbus fly-by-wire aircraft, two Alternate Law (1 and 2), Direct Law and Mechanical Law. The ground mode and flare modes for Alternate Law are identical to those modes for Normal Law.

ALT1 may be entered if there are faults in the horizontal stabilizer, an elevator, yaw-damper actuation, slat or flap sensor, or a single air data reference fault.[4]

ALT2 mode is entered when 2 engines flame out (on dual engine aircraft), faults in two inertial or air-data references, with the autopilot being lost, except with an ADR disagree. This mode may also be entered with an all spoilers fault, certain ailerons fault, or pedal transducers fault.[4]

Direct law (DIR) introduces a direct stick-to-control surfaces relationship : [4] Control surface motion is directly related to the sidestick and rudder pedal motion.[1] The trimmable horizontal stabilisator can only be controlled by the manual trim wheel. All protections are lost, but the maximum deflection of the elevators is changed as a function of the aircraft current centre of gravity.

The cockpit of the 777 is similar to 747-400, a fly-by-wire control simulating mechanical control

The electronic system is subdivided between 2 levels, the 4 actuator control electronics (ACE) and the 3 primary flight computers (PFC). The ACEs control actuators (from those on pilot controls to control surface controls and the PFC). The role of the PFC is to calculate the control laws and provide feedback forces, pilot information and warnings.[6]

The flight control system on the 777 is designed to restrict control authority beyond certain range by increasing the back pressure once the desired limit is reached. This is done via electronically controlled backdrive actuators (controlled by ACE). The protections and augmentations are: bank angle protection, turn compensation, stall protection, over-speed protection, pitch control, stability augmentation and thrust asymmetry compensation. The design philosophy is: "to inform the pilot that the command being given would put the aircraft outside of its normal operating envelope, but the ability to do so is not precluded."[6]

In Normal mode the PFCs transmit actuator commands to the ACEs, which convert them into analog servo commands. Full functionality is provided, including all enhanced performance, envelope protection and ride quality features.

Boeing Secondary mode is comparable to the Airbus Alternate Law, with the PFCs supplying commands to the ACEs. However, EFCS functionality is reduced, including loss of flight envelope protection. Like the Airbus system, this state is entered when a number of failures occur in the EFCS or interfacing systems (e.g. ADIRU or SAARU).[2]

In Direct mode each ACE decodes pilot commands directly from the pilot controller transducers. This mode can be entered automatically or manually. Automatic entry occurs when all PFCs fail, all ACEs fail, or a control data bus is lost.[citation needed]