There are various ways in which a calculator might interpret key strokes.

One can categorize calculators into two main types: 1) single-step or immediate execution calculators and 2) expression or formula calculators.

On a formula calculator one types in an expression and then presses 'Enter' to evaluate the expression.[1][2][3] There are various systems for typing in an expression: infix, postfix, natural display etc.

On an immediate execution calculator, the user presses a key for each operation, by pressing keys to calculate all the intermediate results, before the final value is shown.[4][5][6]

From the first example has been given twice. The first version for simple calculators showing how it is necessary to rearrange operands in order to get the correct result. The second version for scientific calculator where operator precedence is observed.

The immediate execution calculators are based on a mixture of infix and postfix notation: binary operations are infix but unary operations are postfix. Because operators are applied one at a time, the user must work out which operator button to use at each stage and this can lead to problems.[7][8] When discussing these problems, Professor Harold Thimbleby has pointed out that button-operated calculators “… require numbers and operation signs to be punched in a certain order, and mistakes are easy to make and hard to spot”.[9]

Problems can occur because, for anything but the simplest calculation, to work out the value of a written formula, the user of a button-operated calculator is required to:

Mistakes can be hard to spot because:

The simplest example of a possible problem when using an immediate execution calculator given by Professor Thimbleby is 4*(−5).[10] As a written formula, the value of this is −20, because the minus sign is intended to indicate a negative number, rather than a subtraction, and this is the way that it would be interpreted by a formula calculator.

On an immediate execution calculator, depending on which keys are used, and the order in which they are pressed, the result for this calculation can be different. Also, among the calculators, there are differences in the way a given sequence of button presses is interpreted.[11] The result can be:

The effects of operator precedence, parentheses and non-commutative operators, on the sequence of button presses, are illustrated by:

These are only simple examples, but immediate execution calculators can present even greater problems in more complex cases. In fact, Professor Thimbleby claims that users may have been conditioned to avoid them for all but the simplest calculations.[13]

The potential problems with immediate execution calculators stem from the fact that they are imperative.[14] This means that the user must provide details of how the calculation has to be performed.

Formula calculators are more declarative because the typed-in formula specifies what to do, and the user does not have to provide any details of the step-by-step order in which the calculation has to be performed.

Many software tools for the general user, such as spreadsheets, are declarative.[19] Formula calculators are examples of such tools.

Using the full power of the computer

In reverse Polish notation, also known as postfix notation, all operations are entered after the operands on which the operation is performed. Reverse Polish notation is parenthesis-free which usually leads to fewer button presses needed to perform an operation. By the use of stack one can enter formulas without the need to rearrange operands. An example of a calculator which uses RPN is the HP 48G.

Note example 1 which is one of the few examples where reverse Polish notation does not use the fewest button presses – provided one does not rearrange operands. If one would do so then only 6 key strokes would be needed. 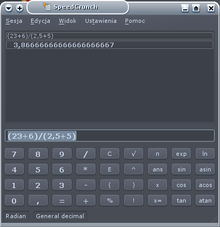 This calculator program has accepted input in infix notation, and returned the answer 3,86. Here the comma is a decimal separator.

This is a particular implementation of infix notation where functions require their parameters to be in brackets.

This method was used from the 1980s to the 1990s in BASIC programmable calculators and pocket computers. Also, most computer algebra systems use this as the default input method.

In BASIC notation the formula is entered as it would be entered in BASIC PRINT command - the PRINT command itself being optional. On pressing the ENTER the result would be displayed. Typing mistakes in the entered formula could be corrected using the same editor function as available when programming the calculator.

For the 2nd example two options are give depending if the BASIC programmable pocket computers had dedicated trigonometric keys [23] or not [24]. 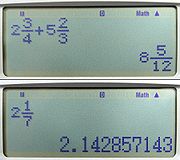 Some calculators allow the entering of equations in a way which things like fractions, surds and integrals are displayed in the way they would normally be written.

Casio used to call this Natural Display or Natural textbook display[25][26], but now uses Natural-VPAM[27]. SHARP calls this WriteView[28] on its scientific calculators and on its graphing calculators it just uses the term Equation Editor[29]. HP calls this Equation Writer[30]. Mathematica calls this Semantic-Faithful Typesetting[31]. Mathcad calls this standard math notation[32]. Maple has a Math Equation Editor[33] but does not have a special name for this input method. Texas Instruments calls this Math Print[34].

For the second example two options are given depending if the calculators will automatically insert needed parenthesis or not. Machines equipped with an alphanumeric display will display SIN(30)×COS(30) before pressing ↵ Enter.