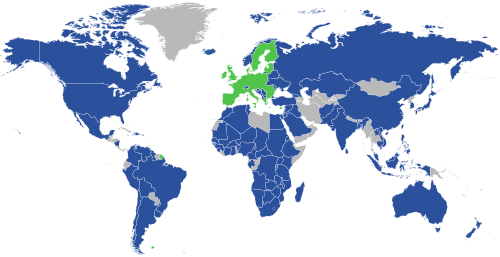 The member states of the European Union speak with the same voice on many issues. EU is the world's largest trade bloc and donor of humanitarian and development assistance, and thus has an extensive network of delegations around the world mainly operating in the framework of External Relations, for which the European Commission is the main decision body. The EU also represents shared political and security viewpoints held by its member states, as articulated in the Common Foreign and Security Policy.

The EU's predecessor, the European Coal and Steel Community, opened its first mission in London in 1955, three years after non-EU countries began to accredit their missions in Brussels to the Community. The US had been a fervent supporter of the ECSC's efforts from the beginning, and Secretary of State Dean Acheson sent Jean Monnet a dispatch in the name of President Truman confirming full US diplomatic recognition of the ECSC. A US ambassador to the ECSC was accredited soon thereafter, and he headed the second overseas mission to establish diplomatic relations with the Community institutions.[1]

The number of delegates began to rise in the 1960s following the merging of the executive institutions of the three European Communities into a single Commission. Until recently some states had reservations accepting that EU delegations held the full status of a diplomatic mission. Article 20 of the Maastrict Treaty requires the Delegations and the Member States’ diplomatic missions to "co-operate in ensuring that the common positions and joint actions adopted by the Council are complied with and implemented". 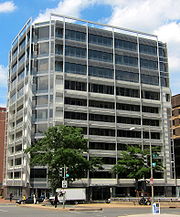 † As part of the process of establishment of the EEAS envisioned in the recently ratified Treaty of Lisbon, on 1 January 2010 all former European Commission delegations were renamed into European Union delegations and till the end of the month 54 of the missions (marked with † in the list above) were transformed into embassy-type missions that employ greater powers than the regular delegations. These upgraded delegations have taken on the role previously carried out by the national embassies of the member state holding the rotating Presidency of the Council of the European Union.[9]