Diocese of Cork, Cloyne and Ross 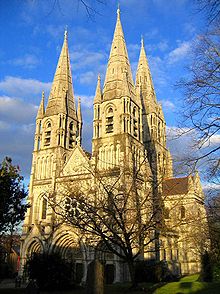 When the Church in England broke communion with the Roman Catholic Church, the Church of England was established by the state as the established church. Later, by decree of the Irish Parliament, a similar new body became the State Church in the Kingdom of Ireland. It assumed possession of most Church property (and so retained a great repository of religious architecture and other items, though some were later destroyed). The substantial majority of the population remained faithful to the Latin Rite of Roman Catholicism, despite the political and economic advantages of membership in the state church. They were obliged to find alternative premises and to conduct their services in secret. The English-speaking minority mostly adhered to the Church of Ireland or to Presbyterianism. In 1833, the two provinces of Dublin and Cashel were merged. Over the centuries, numerous dioceses were merged, in view of declining membership. The same is true for this diocese where it can be seen that each of the entities listed in the title would have been a diocese in its own right. It is for this reason that the united diocese has three cathedrals.

History of the Diocese of Cork

The Diocese of Cork was one of the twenty-four dioceses established at the Synod of Rathbreasail (1111 AD) on an ancient bishopric founded by Saint Finbarr in 876. On 30 July 1326, Pope John XXII, on the petition of King Edward II of England, issued a papal bull for the union of the bishoprics of Cork and Cloyne, the union to take effect on the death of either bishop. The union should have taken effect on the death of Philip of Slane in 1327, however, bishops were still appointed to each separate bishopric. The union eventually took place with Jordan Purcell appointed bishop of the united see of Cork and Cloyne in 1429.[3] Following the Reformation, the diocese was again split and from 1583, Ross and Cork shared a bishop. In 1835 Cloyne was merged with "Ross and Cork".[2]

History of the Diocese of Cloyne

History of the Diocese of Ross

This see was founded by St. Fachtna, and the place-name was variously known as Roscairbre (Rosscarbery) and Rosailithir (Ross of the pilgrims). St. Fachtna founded the School of Ross as well as the see; and his death occurred about 590, on 14 August, on which day his feast is celebrated. At that time the chiefs of the tuath were the O'Leary, known as Uí Laoghaire Ruis Ó gCairbre.[6] By 1160, Ross (distinct from the Scottish Diocese of Ross) was an independent bishopric. In 1207, the Norman King, John of England, granted the cantred of Rosailithir to David Roche, regardless of the claims of the native chief, the O'Driscoll, but the episcopal manors were left undisturbed. In 1306, the value of the bishop's mensa was 26 marks, while the cathedral was valued at 3 marks; and the tribal revenue of the see was but 45 pounds sterling. The number of parishes was 29, divided into 3 divisions; and there was a Cistercian abbey, Carrigilihy (de fonte vivo); also a Benedictine Priory at St. Mary's, Ross. The Franciscans acquired a foundation at Sherkin Island from the O'Driscolls in 1460.

Blessed Thady MacCarthy was appointed Bishop of Ross in 1482, but was forcibly deprived of his see in 1488. However, he was translated to the united bishopric of Cork and Cloyne in 1490; was again a victim of political intrigues, and died a confessor at Ivrea in 1492, being beatified in 1895. In 1517 the revenue of the diocese was but 60 marks. At that date the chapter was complete with 12 canons and 4 vicars, and there were 27 parishes, including three around Berehaven. Following the Reformation, the merged dioceses of "Cork and Cloyne" were again split with Ross and Cork sharing a bishop from 1583 onwards.

The Diocese of Cloyne comprises 5 parishes with 19 churches.

The Diocese of Ross comprises 3 parishes with 13 churches.