Dinakshie Priyasad (born Baminnahennadige Dinakshie Priyasad on the 18th of March 1990) is a Sri Lankan Teledrama actress and TV presenter. Dinakshie made her acting debut at the age of two in films directed by her father the veteran Sri Lankan film director Dinesh Priyasad.[1] She has then gone on to star in teledramas, music videos, commercials and successfully hosts many talk shows, music shows and contemporary magazine programs.

Dinakshie was born in Colombo, Sri Lanka. She is the first of three daughters for Dinesh Priyasad and Shirani Priyasad. Her father Dinesh[2] is a eminent film director who is considered a pioneering figure in the Sri Lankan film industry bringing in various technologies and graphics to the country's industry. His most famous project being the 1995 Demodara Palama a high action movie starring Gamini Fonseka.[3] Dinakshie's mother has produced films that were directed by her father. Dinakshie has two younger sisters Sheshadrie Priyasad, born 2 December 1991 and Shanudrie Priyasad born 8 September 1997. Following her elder sister, Sheshadrie has entered the industry making her main role debut in the upcoming film Challengers (Yawwanaye Babaru Api).[4] The youngest Shanudrie who has also starred in many films and teledramas went on to win a Special Jury Award in the Raigam Tele Awards 2009.[5] 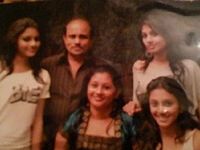 Dinakshie and her family in 2007

Dinakshie attended the Holy Family Convent (HFC) in Bambalapitiya up to the ordinary level (O/L) examination and completed her pre university studies at the Royal Institute in the Maths Stream.[6] Thereafter she joined The Open University of Sri Lanka and is currently studying Engineering for her Bachelor's degree. She is also doing her diploma in Media and Mass Communication at the University of Sri Jayewardenepura.[7]

Dinakshie began her career as a TV presenter in the year 2000 presenting the Sirasa TV Punchi Panchi children's programme which she continued presenting for 7 years. Thereafter she contributed to a few children's programmes in Sirasa and Rupavahini. In 2008 she started co-presenting the Channel C music chat show C Vibez with her sister Sheshadrie. This show is seen as a stepping stone for new artists who are trying to break in to the music and arts world. In 2009 she presented Y Cafe a youth magazine programme on Sirasa TV and subsequently a Bollywood music show Bollywood Magic on Swarnavahini.

Though it was in 1992 as a 2 year old that Dinakshie made her acting debut in her fathers film Apaye Thathpara 84,000. Her first major acting role came 2009 in the tele drama version of Upul Shantha Sannasgala’s renowned romantic novel Wassana Sihinaya. The teledrama was produced and directed by Janaka Siriwardana and Kavindya Jayasekara penned the script.[8] In 2009 she was seen in the teledrama Sanda Giri Pawwa portraying the main role of a teacher in a rural area. She has stated that this was her most challenging role she has portrayed as the character was a teacher who came from extreme poverty to excel in life and the sensitive emotions involved were challenging to depict. Also the filming were done in extreme harsh rural areas in the Kurunagala district. Her next teledrama was Hithata Wahal Weemi Sarath Kaviratne’s popular picture story that appeared in the Siththara weekly in the seventies.[9] The teledrama was directed by Mohan Niyaz[10] where Dinakshie portrays the character of Nimmi.

Dinakshie has also appeared as the lead in a couple of music videos by the artists Tehan Perera - Unuhuma and Prabudda Geetha Ruchi – Yahamin duka kiyaganna.

As a budding singer Dinakshie is also in the process of releasing a music album with her 2 sisters. The album is being composed and produced by Ruckshan Mark. She has also hosted numerous concerts, shows and live events.