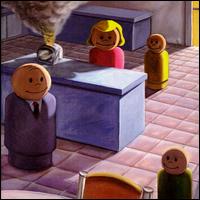 "Diary" is the first studio album from the band . The album is considered by many to be the first defining "emo" album of the second wave. [cite web| title='Diary' album review on Allmusic.com | publisher=Allmusic| url=http://www.allmusic.com/cg/amg.dll?p=amg&sql=10:iy09kettkq7q | accessdate=2008-07-22] The song "Seven" was played live on .

There are three circulating demos from Diary recording sessions, which took place at Idful Studios, in .
*"In Circles"
*"Rodeo Jones"
*"Song About an Angel"

*The "butterfly" drawing on the album's book was created by 's father.
*The vinyl has been released in three limited edition pressings, all of which are out of print. The first was a multi-colored splatter vinyl, released on "Glitterhouse Records" in . The second was a black vinyl pressing on . A repress followed on green vinyl (and possibly a second black pressing) but the label for this second pressing states "Edition II" under the logo. All three vinyl pressings are missing 3 songs that are present on the CD, possibly due to the time constraints of vinyl (the album clocks in at 53 minutes). The missing songs are "Round", "48" and "Grendel".
*The album cover features the popular children's toy .