Dimefox is an organophosphorus agent and a colourless liquid with a fishy odour.[2] The structure consists of a central phosphate atom, which is connected to an oxygen by a double bond. The phosphor also binds to a fluor atom (the leaving group which is most reactive) and two aminodimethyl groups. Dimefox was used as pesticide, but has been deemed obsolete or discontinued for use by the World Health Organisation. However, they do not guarantee that all commercial use of this compound ceased. But in most countries it is no longer registered for use as a pesticide.[3]

Synthesis of organic phosphorus compounds began around 1820 with the esterifications of alcohol to form phosphoric acid. Dimefox was first produced in 1940 by the group of Gerard Schrader in Germany. Schrader is most known for production of several warfare agents like sarin and tabun.[4]

Although dimefox is generally considered to be very dangerous, there is little report of any incidents.[5][6]

Absorption into the body

Dimefox is a relatively small molecule, with a small polar surface area.[1] Therefore it is likely that the agent can easily pass through membranes. This means it can be absorbed through the skin, as well as it can be inhaled as a fume or an aerosol. It can also pass through the blood brain barrier and exert it's effect throughout the whole body. 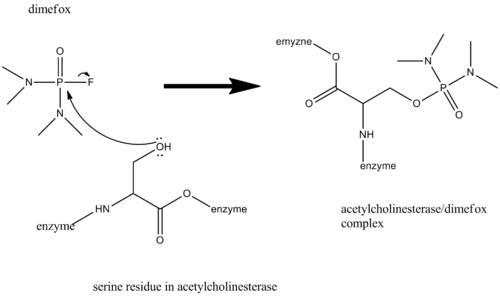 The primary target of Dimefox is the enzyme acetylcholine esterase(AChE). This enzyme is responsible for the hydrolysis of acetylcholine to acetic acid and choline. Acetylcholine is a major neurotransmitter in the central and peripheral nervous system. It is solely disposed of by AChE, and it is the choline that is taken back up by the presynaptical membrane.[7]

AChE has in his active site a serine that binds covalently to acetylcholine by a nucleophilic attack on the carbonyl carbon of acetylcholine. The formed intermediate then releases choline from its active site. The enzyme is regenerated by a hydrolytic attack of water which releases acetic acid.[8]

Dimefox inhibits the function of AChE because its acts as an acetylcholine analogue, binding the active site serine, whilst losing its fluoride group. The formation is very fast, but the regeneration of the enzyme by a hydrolytic attack is very slow. It is a matter of hours to days, opposed to that of acetylcholine, which occurs within a second. So the enzyme is rendered inactive, and acetylcholine accumulates at the synapses.,[7][8] However, the phosphotriesterases can, depending on the substrate, catalyse the hydrolysis of organophosphorus compounds.[8]

Another route that can diminish the effect of dimefox is by butyrylcholinesterase(BChE). This is a B-esterase that is secreted into plasma by the liver. It can bind Dimefox and so protect AChe against the pesticide. There are many varieties of BChE due to genetic polymorphisms. This is reflected in the strength of their bond to Dimefox. This explains why some people with a less active variety of the enzyme are more susceptible to Dimefox toxicity.[7]

Furthermore, Dimefox is thought to induce a increased proliferation rate of cells. However, it is not genotoxic.. This suggests that Dimefox has mitogenic activity. Down regulation of the cyclin-dependent kinase inhibitor p21 gene by Dimfox may be connected to the observed mitogenic activity.[9]

1. Acute cholinergic crisis as a result of AChE inhibition. This inplies hyperstimulation of the muscarinic receptor, nicotinic receptor or both. Hyperstimulation of muscarinic receptor leads to bradycardia, bronchoconstriction, bronchorrhoea, hypotension, increased gastrointestinal motility, abdominal cramps, miosis and hyper salivation. Hyperstimulation of nicotinic receptors can result in hypertension, tachycardia, fibrillation, fasciculation and necrosis of striated muscles. Hyperstimulation of both receptors can result in tremor, movement in coordination, seizures, central depression of respiration, coma and even death. In most cases death is caused by respiratory failure. 2. Intermediate syndrome (IMS) 3. Organophosphate-induced delayed neuropathy (OPIDN) that has been explained by the inhibition of neuropathy target esterase. 4. Chronic organophosphate induced neuropsychiatric disorder (results from long-term low-level exposure).[10]

There are a few antidotes against acute organophosphorus pesticides poisoning; the anticholinergic drug atropine, cholinesterase-reactivating agents, oximes and anticonvulsant drugs benzodiazepines. The delayed neuropathy can unfortunately not be treated.,[10][11]

Atropine is the first choice drug in case of an organophosphorus pesticide poisoning. It antagonizes the physiological effects of the acetylcholine accumulation. Atropine is an antimuscarinic drug in the central nervous system and blocks convulsions.,[10][11]

Oximes, like trimedoxime (TMB-4), obidoxime (LüH-6) and pralidoxime (PAM-2) must be administrated quickly after the poisoning and then leads to regeneration of acetylcholinesterase. Tertiary oximes are able to pass the blood-brain barrier, reactivate the AChE in the brain, and abolish convulsions. It acts in place of the serine hydroxyl group in the enzyme and forms a complex with the organophosphorus moiety. The oxime proximally exerts a nucleophilic attack on the phosphorus of the enzyme inhibitor complex. Oxime is a reversible ligand which binds to cholinesterase either at the active site, at an allosteric site, or at both sites. As a result of this reaction, the oxime binds to the organophosporus moiety, leading to the regeneration of the original acetylcholinesterase.,[10][11]

Benzodiazepines, like diazepam, potentiate the action of the inhibitory neurotransmitter γ-aminobutyric acid at its receptors. The main result of this is hyper polarization of neurons is that it makes them less susceptible to cholinergically-induced depolarization. Thereby the propagation of convulsions is stopped. Diazepam in specific reduces anxiety, restlessness and muscle fasciculations, terminating convulsions and reduces mortality when used in combination with atropine and oxime. Intoxication effects in general are better treated when the combinations of antidotes are administrated.[10]

With the DEREK software,[12] Dimefox is analysed for its toxicity. The agent is tested for both mammalian and bacterial toxicity. In bacteria it isn’t believed to be toxic. On the other hand, cholinesterase inhibition in mammals is plausible. This is because Dimefox is an organophosphorus compound.

The severity of the intoxication depends on the dose and the way of exposure. This table shows the critical values and their effects for some organisms.