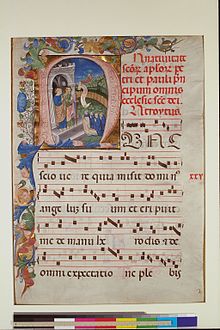 Introduction. The Digital Scriptorium (DS) is a non-commercial online image database of medieval and renaissance manuscripts, or manuscripts made in the tradition of books before printing.[1] DS unites scattered resources from a consortium of many libraries into a union catalog for teaching and scholarly research in medieval and renaissance studies.[2] It provides unprecedented access to illuminated and textual manuscripts through digital cataloging records, supported by high resolution images and retrievable by various topic searches. DS enables users from the most casual to the most specialized to study the rare and valuable materials of academic, research, and public libraries. It makes available collections that are often restricted from public access and includes not only recognized masterpieces but also understudied manuscripts that have been previously overlooked for exhibition or publication.

Background and membership. Funded by grants from the Andrew W. Mellon Foundation, the National Endowment for the Humanities, and the Gladys Krieble Delmas Foundation, DS at its inception in 1997 was a joint project of the Bancroft Library at UC Berkeley (under Prof. Charles Faulhaber) and the Rare Book & Manuscript Library of Columbia University (under Dr. Consuelo W. Dutschke). The plan was to digitize and make available on the World Wide Web catalog records and selected images from the two universities' medieval and early renaissance manuscript collections. The decision in favor of sample images rather than the complete imaging of manuscripts was both financial and philosophical. With complete imaging, limited funding would have required institutions to represent some manuscripts while leaving others untouched; with sample imaging, however, DS could recognize the infinite directions of scholarship and interests in this rich material and thus offer various pathways of entrance to the whole corpus of medieval and renaissance manuscripts. Because of patterns of collecting in the 19th and early 20th century, moreover, many manuscripts in American collections comprise partial texts or dispersed single leaves.[3] Cataloging as many of these fragmentary works as possible increases the chance that some manuscripts could be reconstituted, if only virtually. Thus as a philosophical principle, inclusivity won and has guided DS ever since.

Between 1999 and 2002, additional holdings from Huntington Library, the University of Texas, Austin, and the New York Public Library were incorporated, along with those of a number of smaller collections. The database continued to grow, and presently (2011) DS represents the collections of twenty-eight member institutions, including not only those with substantial repositories, such as Harvard's Houghton Library and the University of Pennsylvania, but also some with few but rare works such as the Providence Public Library, which owns an unusual 15th century Bible (Wetmore Ms 1) in rebus format. In continuous growth, DS now includes catalog records for 5,700 manuscripts and 27,000 digitized images; planning is moving forward to bring in other North American collections, including Yale's Beinecke Library.[4]

Library Community Resource. DS fosters the public viewing of non-circulating materials otherwise available only within restricted access libraries. As a visual catalog, DS allows scholars and beginners to verify with their own eyes cataloguing information about places and dates of origin, scripts, artists, and quality. Special emphasis is placed on the touchstone materials, i.e., manuscripts signed and dated by their scribes, thus beginning the American contribution to the goal established in 1953 by the Comité international de paléographie latine (International Committee of Latin Paleography): to document photographically the proportionately small number of codices of certain origin that will serve stylistically to localize and date the vast quantities of unsigned manuscripts.[5] DS publishes not only manuscripts of firm attribution but also ones that need the attention of further scholarship and traditionally would have been unlikely candidates for reproduction. Because it is web-based, it also allows for updates and corrections, and as a matter of form individual records in DS can and do acknowledge contributions from outside scholars.[6] DS encourages interaction between the academic and the library world to build a growing and reciprocally beneficial body of knowledge. DS looks to the needs of a very diverse community of specialists: medievalists, classicists, musicologists, paleographers, diplomatists, literary scholars and art historians. At the same time DS recognizes a broader user community in the public that values rare and unique works of historical, literary and artistic significance.

Cataloging Standard. DS expands the limited resources of libraries to manage collections of rare materials and cultural artifacts. It bridges the gap between needs and resources by providing a cataloging standard based on extensive and granular descriptive metadata supported by high resolution digital images. Medieval and renaissance manuscripts are best served by format-specific cataloging that is sensitive to their complexity as hand-made books. They differ from modern manuscripts, such as letters or personal records, because although they are unique objects they are usually not unique texts. They may be written, bound, and decorated by hand but they are still books. The text of a fourteenth-century missal, for example, can be identified using an early twentieth-century printed version of the same text. Or several collections may own more than one manuscript of St. Augustine’s De Civitate Dei (The City of God). A DS search by title in fact retrieves seven copies of this work, all unique manuscripts dating from the 12th to the 15th centuries, owned by five different libraries. The potential for relationships among manuscripts means that item-level, bibliographic cataloging rather than collection-based, archival cataloging best identifies and describes the content of medieval and renaissance manuscripts.[7] But these works also have historical and artifactual significance, so catalog records for medieval and renaissance manuscripts need to describe not only their contents but also the complete provenance (chain of ownership), binding (which may be from a later period than the rest of the book), marks of ownership (such as coats-of-arms), physical condition, material support (usually parchment), foliation and construction of the book, layout of the text, attribution of script, date (often estimated), style and localization of decoration and painted illustration, and names not just of authors, but craftsmen, scribes, artists and owners.

One could go so far as to assert that some modern users of medieval and Renaissance manuscripts are indifferent to the text of the codex because their interest lies in some other aspect of its production. The field of art history offers the most striking example; a scholar studying the art of Mariano del Buono will care equally for the Harvard manuscript (a copy of Plato) and for the manuscript held by New York Public Library (a copy of Livy). DS recognizes such interests and allows for searching on physical features only, whether by artist name (such as in the above example) or by place and date of origin ("Italy," and "1450-1499" would produce the same result).[8]

Before digitization, most records of medieval and renaissance manuscripts were excluded from library public access catalogs but instead were published in printed books written by scholar-specialists for a similarly trained audience.[9] DS records are different from these but similar to more usual library cataloging records (whether as 3 x 5s or online) in that they are simplified, standardized and concise. Specialists may notice that a DS record omits some information (such collation) available in scholarly catalogs, in order to avoid descriptions that would take too much time and discourage librarians from attempting the task. Anticipating Green and Meisner, the goal has been “more product, less process,” or as the Spanish proverb goes, “lo mejor es enemigo de lo bueno.”[10] A DS record is thus not intended to serve as an ideal and thorough description, but rather a practical surrogate for the actual manuscript, a partial but far better representation of it than a typical content-based OPAC (online public access catalog) record.

Compared to MARC (the bibliographic standard used by most American libraries), DS is better designed to describe not only the content but also the historical and artifactual characteristics of this material, while using sample images to support the descriptions. The sample images contain implicit and necessary cataloging information, and most DS records include images, although there are some exceptions. Although DS records can be adapted to MARC formats, DS better captures the complexity of medieval and renaissance manuscripts than MARC.[11] For example, DS nests the sections of descriptive metadata in order to catalog a manuscript with multiple texts of multiple origins all in one binding, while MARC provides a flat file that can only deal with a coterminous text + physical unit. DS also indexes specific information pertinent to this format, with a separate field for “Artist,” for example, rather than one for “personal names” which except for the author MARC relegates to a catch-all 700 field. DS, moreover, creates superior records to archival cataloging based on EAD, because the latter is collections-based and not designed to be descriptive and searched at the item level. Thus the DS cataloging method has become the unofficial library standard for the online cataloging of medieval and renaissance manuscripts in the United States.

Digital Preservation and Access. The University of California, Berkeley provided the first home to the DS database, both in terms of managing the project and devising its initial technology. For an interim period of time (2003–2011) DS was hosted at Columbia but is now returning to its once and future home at Berkeley. The technical innovations produced by the teams of both universities have created a precocious digital product, and libraries that include their manuscript collections in DS benefit from a progressive, standards-based digitization policy.[12] Originally using Microsoft Access to serve as a cross-institutional data collection tool, the DS database used SGML and later XML to aggregate and query the combined information. The present platform managed by U.C. Berkeley depends upon software known as WebGenDB. WebGenDB is a non-proprietary, web-based interface for the underlying control database GenDB.[13] GenDB houses the descriptive, structural and administrative metadata for the materials being digitized for web presentation, and outputs the metadata using the Metadata Encoding and Transmission Standard (METS) format. METS provides an XML schema-based specification for encoding "hub" documents for materials whose content is digital.[14] A "hub" document draws together potentially dispersed but related files and data. METS uses XML to provide a flexible vocabulary and syntax for identifying the digital components that together comprise a digital object, for specifying the location of these components, and for expressing their structural relationships. The digital components comprising a digital object could include the content files, the descriptive metadata, and the administrative metadata. METS can be used for the transfer, dissemination and/or archiving of digital objects, all in compliance with the OAIS (Open Archival Information System) reference model developed at OCLC.[15] The DS reliance on OAIS (ISO 14721: 2003) promises secure digital preservation policy, supported by the California Digital Library digital curation services and the CDL “Merritt” digital archive.[16]

Joining past and future. Digital Scriptorium uses the library tools of the future to create access to cultural works of the past. Libraries and collections with medieval and renaissance manuscripts that are interested in joining the consortium should contact DS through the feedback page at the organization’s website.[17]