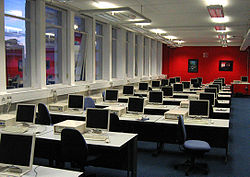 The Digital Revolution is the change from analog mechanical and electronic technology to digital technology that has taken place since c. 1980 and continues to the present day.[1] Implicitly, the term also refers to the sweeping changes brought about by digital computing and communication technology during the latter half of the 20th century. Analogous to the Agricultural Revolution and Industrial Revolution, the Digital Revolution marked the beginning of the Information Age.

Central to this revolution is the mass production and widespread use of digital logic circuits, and its derived technologies, including the computer, digital cellular phone, and fax machine.

The underlying technology was invented in the later half of the 20th century and became economical for widespread adoption after the invention of the Personal Computer. The digital revolution converted technology that previously was analog into a digital format. By doing this, it became possible to make multiple generation copies that were identical to the original. In digital communications, for example, repeating hardware was able to amplify the digital signal and pass it on with no loss of information in the signal. Of equal importance to the revolution was the ability to easily move the digital information between media, and to access or distribute it remotely.

A major landmark in the revolution was the transition from analog to digital recorded music. In the 1980s, the digital format of optical compact discs supplanted analog formats, such as vinyl records and cassette tapes, as the popular medium of choice.[6]

In 1947 the transistor was invented,[7] leading the way to more advanced digital computers. In the 1950s and 1960s, the military, governments and other organizations had computer systems, and the Whole Earth movement of the 1960s led to the inspiration and eventual creation of the World Wide Web.[8]

In the decade of the 1980s computers became familiar machines to the general public in developed countries, and millions of people bought computers for home use, including 17 million Commodore 64s alone between 1982 and 1994.[11]

Though computers were not quite an everyday sight, by the late 1980s, many businesses became dependent on computers and digital technology to operate, and for this reason, the 1980s is generally considered a part of the digital age.

By the end of the 1980s, having some knowledge of computers became necessary for many jobs.

In 1992 the World Wide Web was released to the public,[12] by 1996, the Internet was in the mainstream consciousness and many businesses listed websites in their ads. By 1999, almost every country had a connection, and more than half of Americans used the Internet on a regular basis.

In late 2005 the population of the Internet reached 1 billion,[14] and 3 billion people worldwide used cell phones by the end of the decade. Currently, television are transitioning from analogue to digital signal.

The link between mobile devices and internet webpages via "social networking" have become a standard in digital communication. By 2010, 2 billion people used the Internet, double the number using it in 2005. By 2015, tablets and phones are expected to exceed personal computers in Internet usage. [15]

Underlying the digital revolution was the development of the digital electronic computer, the personal computer, and particularly the microprocessor with its steadily increasing performance (as described by Moore's law), which enabled computer technology to be embedded into a huge range of objects from cameras to personal music players. Equally important was the development of transmission technologies including computer networking, the Internet and digital broadcasting. 3G phones, whose social penetration grew exponentially in the 2000s, also played a very large role in the digital revolution as they simultaneously provide ubiquitous entertainment, communications, and online connectivity.

Positive aspects include greater interconnectedness, easier communication, and the exposure of information that in the past could have more easily been suppressed by totalitarian regimes.

The economic impact of the digital revolution has been large. Without the World Wide Web (WWW), for example, globalization and outsourcing would not be nearly as viable as they are today. The digital revolution radically changed the way individuals and companies interact. Small regional companies were suddenly given access to much larger markets. Concepts such as On-demand services and manufacturing and rapidly dropping technology costs made possible new innovations in all aspects of industry and everyday life.

After initial concerns of an IT Productivity Paradox is growing evidence that digital technologies have significantly increased the productivity and performance of businesses.[16]

In some cases, company employees' pervasive use of portable digital devices and work related computers for personal use — email, instant messaging, computer games — were often found to, or perceived to, reduce those companies' productivity. Personal computing and other non-work related digital activities in the workplace thus helped lead to stronger forms of privacy invasion, such as keystroke recording and information filtering applications (spyware and content-control software).

Privacy in general became a concern during the digital revolution. The ability to store and utilize such large amounts of diverse information opened possibilities for tracking of individual activities and interests. Social libertarians and privacy rights advocates feared the possibility of an Orwellian future where centralized power structures control the populace via automatic surveillance and monitoring of personal information in such programs as the CIA's Information Awareness Office[17]. Consumer and labor advocates opposed the ability to direct market to individuals, discriminate in hiring and lending decisions, invasively monitor employee behavior and communications and generally profit from involuntarily shared personal information.

The Internet, especially the WWW in the 1990s, opened whole new avenues for communication and information sharing. The ability to easily and rapidly share information on a global scale brought with it a whole new level of freedom of speech. Individuals and organizations were suddenly given the ability to publish on any topic, to a global audience, at a negligible cost, particularly in comparison to any previous communication technology.

In other cases, special interest groups as well as social and religious institutions found much of the content objectionable, even dangerous. Many parents and religious organizations, especially in the United States, became alarmed by pornography being more readily available to minors. In other circumstances the proliferation of information on such topics as child pornography, building bombs, committing acts of terrorism, and other violent activities were alarming to many different groups of people. Such concerns contributed to arguments for censorship and regulation on the WWW.

Copyright and trademark issues also found new life in the digital revolution. The widespread ability of consumers to produce and distribute exact reproductions of protected works dramatically changed the intellectual property landscape, especially in the music, film, and television industries.

The digital revolution, especially regarding privacy, copyright, censorship and information sharing, remains a controversial topic. As the digital revolution progresses it remains unclear to what extent society has been impacted and will be altered in the future.

While there have been huge benefits to society from the digital revolution, especially in terms of the accessibility of information, there are a number of concerns. Expanded powers of communication and information sharing, increased capabilities for existing technologies, and the advent of new technology brought with it many potential opportunities for exploitation. The digital revolution helped usher in a new age of mass surveillance, generating a range of new civil and human rights issues. Reliability of data became an issue as information could easily be replicated, but not easily verified. The digital revolution made it possible to store and track facts, articles, statistics, as well as minutia hitherto unfeasible.

From the perspective of the historian, a large part of human history is known through physical objects from the past that have been found or preserved, particularly in written documents. Digital records are easy to create but also easy to delete and modify. Changes in storage formats can make recovery of data difficult or near impossible, as can the storage of information on obsolete media for which reproduction equipment is unavailable, and even identifying what such data is and whether it is of interest can be near impossible if it is no longer easily readable, or if there is a large number of such files to identify. Information passed off as authentic research or study must be scrutinized and verified. With such massive proliferation of information it became possible to write an article citing wholly false sources, also based on false sources.[citation needed]

These problems are further compounded by the use of digital rights management and other copy prevention technologies which, being designed to only allow the data to be read on specific machines, may well make future data recovery impossible. Interestingly, the Voyager Golden Record, which is intended to be read by an intelligent extraterrestrial (perhaps a suitable parallel to a human from the distant future), is recorded in analog rather than digital format specifically for easy interpretation and analysis.