The Northern Paiute traditionally have lived in the Great Basin in eastern California, western Nevada, and southeast Oregon. The Northern Paiute's pre-contact lifestyle was well adapted to the harsh desert environment in which they lived. Each tribe or band occupied a specific territory, generally centered on a lake or wetland that supplied fish and water-fowl. Rabbits and pronghorn were taken from surrounding areas in communal drives, which often involved neighboring bands. Individuals and families appear to have moved freely between bands. Pinyon nuts gathered in the mountains in the fall provided critical winter food. Grass seeds and roots were also important parts of their diet. The name of each band came from a characteristic food source. For example, the people at Pyramid Lake were known as the Cui Ui Ticutta (meaning "Cui-ui eaters"), the people of the Lovelock area were known as the Koop Ticutta, meaning "ground-squirrel eaters," and the people of the Carson Sink were known as the Toi Ticutta, meaning "tule eaters." The Kucadikadi of Mono County, California are the "brine fly eaters."

Chief Winnemucca, Chief of the Paiutes. He was also named Poito.

Sustained contact between the Northern Paiute and Euro-Americans came in the early 1840s, although the first contact may have occurred as early as the 1820s. Although the Paiute had adopted the use of horses from other Great Plains tribes, their culture was otherwise largely unaffected by European influences at that point. As Euro-American settlement of the area progressed, several violent incidents occurred, including the Pyramid Lake War of 1860, Owens Valley Indian War 1861-1864,[3] Snake War 1864-1868; and the Bannock War of 1878. These incidents generally began with a disagreement between settlers and the Paiute (singly or in a group) regarding property, retaliation by one group against the other, and finally counter-retaliation by the opposite party, frequently culminating in the armed involvement of the U.S. Army. Many more Paiutes died from newly introduced infectious diseases such as smallpox than in warfare. Sarah Winnemucca's book Life Among the Piutes (1883)[4] gives a first-hand account of this period, although it is not considered to be wholly reliable.

The government first established the Malheur Reservation for the Northern Paiute in eastern Oregon. The federal government's intention was to concentrate the Northern Paiute there, but its strategy did not work. Because of the distance of the reservation from the traditional areas of most of the bands, and because of its poor environmental conditions, many Northern Paiute refused to go there. Those that did, soon left. They clung to their traditional lifestyle as long as possible; when environmental degradation made that impossible, they sought jobs on white farms, ranches or in cities. They established small Indian colonies, where they were joined by many Shoshone and, in the Reno area, Washoe people.

Later, the government created larger reservations at Pyramid Lake and Duck Valley, Nevada. By that time the pattern of small de facto reservations near cities or farm districts, often with mixed Northern Paiute and Shoshone populations, had been established. Starting in the early 20th century, the federal government began granting land to these colonies. Under the Indian Reorganization Act of 1934, several individual colonies gained federal recognition as independent tribes. 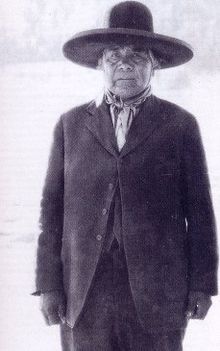 Wovoka – Paiute spiritual leader and creator of the Ghost Dance

These are federally recognized tribes with significant Northern Paiute populations:

Owens Valley Paiute live on the California-Nevada border, near the Owens River on the eastern side of the southern Sierra Nevada Mountains in the Owens Valley and speak the Mono language.[7] Their self-designation is Numa, meaning ‘People’ or Nün‘wa Paya Hup Ca’a‘ Otuu’mu - ‘Coyotes children living in the water ditch’ [8]

In the 1990s, approximately 2,500 Owens Valley Paiutes lived on reservations.[9]

The Southern Paiute traditionally lived in the Colorado River basin and Mojave Desert in northern Arizona and southeastern California including Owens Valley,[12] southern Nevada and southern Utah. Terminated as a tribe in 1954 under federal efforts at assimilation, the Southern Paiute regained federal recognition in 1980. Many of these Paiute traded with coastal tribes; for example, tribes of the Owens Valley have been proven to trade with the Chumash of the Central Coast, based upon archaeological recovery at Morro Creek.[13] A band of Southern Paiute at Willow Springs and Navajo Mountain, south of the Grand Canyon, reside inside the Navajo Indian Reservation. These "San Juan Paiute" were officially recognized as a separate tribe by the Bureau of Indian Affairs in 1980.

The first European contact with the Southern Paiute occurred in 1776, when fathers Silvestre Vélez de Escalante and Francisco Atanasio Domínguez encountered them during an attempt to find an overland route to the missions of California. Before this date, the Southern Paiute suffered slave raids by the Navajo and the Ute. The arrival of Spanish and later Euro-american explorers into their territory increased slave raiding by other tribes. In 1851, Mormon settlers strategically occupied Paiute water sources, which created a dependency relationship. But, the presence of Mormon settlers soon ended the slave raids, and relations between the Paiutes and the Mormons were basically peaceful. The Mormon missionary Jacob Hamblin worked at diplomatic efforts. The introduction of European settlers and agricultural practices (most especially large herds of cattle) made it difficult for the Southern Paiute to continue their traditional lifestyle, as it drove away the game and reduced their ability to hunt, as well as to gather natural foods.

Today Southern Paiute communities are located at Las Vegas, Pahrump, and Moapa, in Nevada; Cedar City, Kanosh, Koosharem, Shivwits, and Indian Peaks, in Utah; at Kaibab and Willow Springs, in Arizona; Death Valley and at the Chemehuevi Indian Reservation and on the Colorado River Indian Reservation in California. Some would include the 29 Palms Reservation in Riverside County, California.

Numaga, peace chief of the Paiutes during the Pyramid Lake Paiute War

The Southern Paiute traditionally had sixteen to 31 subgroups, bands, or tribes.[14]

The Pah Ute War, also known as the Paiute War, was a minor series of raids and ambushes initiated by the Paiute and which had an effect on the development of the Pony Express. It took place from May through June 1860, though sporadic violence continued for a period afterward.