Birmingham Coach Station (formerly Digbeth Coach Station) is a major coach interchange in Digbeth, Birmingham, England offering services to destinations throughout Great Britain and also to Belfast, Dublin and Poland. National Express, the largest scheduled coach service provider in Europe, has its national headquarters on the site[1]. The refurbishment was estimated to have cost £15 million.[2]

It was officially reopened on 18 December 2009 by England national football manager Fabio Capello.[3]

The original interchange (known as 'Digbeth Coach Station') was built on the same site by Midland Red in 1929. The site was also used as a depot for Midland Red and by is successor Midland Red West.

An outline planning application for a design by MAKE Architects was submitted on behalf of National Express Ltd to Birmingham City Council in March 2006 [5]. However this option was abandoned in favour of a competing design by SBS Architects[6].

The final planning application for the design by SBS Architects was submitted on 29 October 2007.[2]

The old coach station closed in November 2007 for redevelopment and during reconstruction National Express used a temporary site in Oxford Street on the opposite side of Digbeth High Street, called Birmingham Central Coach Station. The new station has been awarded an 'Excellent' rating under the BRE Environmental Assessment Method - the most widely used system for judging how environmentally friendly a building is. A number of passengers had to stay in the Coach Station overnight on Saturday 18th December 2010 as the transport network of Britain came to a standstill and rail and road traffic was unable to enter or leave Birmingham and other parts of the country. 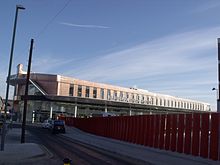 December 2009 - The rear of the new coach station