Digambara (Sanskrit: दिगंबर) "sky-clad" is one of the two main sects of Jainism. "Sky-clad" has many different meaning and associations throughout Indian religions. Many representations of deities within these traditions are depicted as sky-clad, e.g. Samantabhadra/Samantabhadrī in Yab-Yum. Certain traditions and lineages also practice Digambara as a lifelong vow as evidenced by numerous sadhus throughout India.

Digambara is one of the two main sects of Jainism, the other being Svetambara. 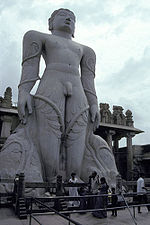 Until the leadership of Acharya Bhadrabahu, there was no significant division. After that some divisions gradually arose. Generally, Digambara monks wear no clothes whereas Svetambara "white-clad" monks usually wear white clothes.

Although senior Digambara monks wear no clothes, following the practice of Mahavira, they do not consider themselves to be nude. Rather, they are wearing the environment, that is the quintessential, akasha or space. Digambaras believe that this practice represents a refusal to give in to the demands of the body for comfort and private property. Only Digambara ascetics are required to forsake clothing and not the laity. Digambara ascetics have only two possessions: a peacock feather broom and a water gourd. Conversely, Svetambara monks usually wear white maintaining that nudism is no longer practicable. While there are some differences in some practices, the main principles of each sect such as Mahavratas, Anuvratas and so forth are the same.

The native Jain communities of Rajasthan, Madhya Pradesh, Bundelkhand, Uttar Pradesh, Southern Maharashtra, Karnataka, Tamil Nadu are all Digambaras, as are the Saravagis and the Agrawals of North India. In Gujarat, the majority of Jains follow the Svetambara tradition, although some Jain communities of these regions, like the Humad, narsinghpura are also Digambaras.

Chatutath, Pancham, Bogar, Kasar, Patni, Sethi, Tongia, Rara/Raoka, Kasliwal, Godha, Badjatiya and Patwa are sub-castes belonging to the aforementioned Khandelwai or Sarawagi sub-community. They are mainly from Rajasthan. Their ancestors have been engaged in business and have attained great welath. Many Jain temples and havelis made in the Jaisalmer, Udaipur and Jodhpur regions were built by them.

The Parwars come mainly from Bundelkhand. They are one of the most learned amongst Jains and most Pandits and scholars of tirthakshetras are Parwars.

The prominent Acharyas of the Digambar tradition were:

Circa the 10th century, Digambar tradition was divided into two main orders.

Acharya Shantisagar, the first Acharya of the 20th century, belonged to the tradition of Sena gana. Practically all the Digambara monks today belong to his tradition, either directly or indirectly. The Bhattarakas of Shravanabelagola and Mudbidri belong to Deshiya gana and Bhattara of Humbaj belongs to Balatkara gana. Among the prominent Digambara Acharyas today are Acharya Vidyasagar, Acharya Vardhman sagar, Acharya Vidyanand, Acharya Pushpadant and Acharya Devanandji and Acharya Abhinandan Sagar Ji. Acharya Abhinandan Sagar Ji & Acharya vardhman sagar ji are the current pattacharyas of Acharya Shantisagar Ji.

Those following the Terapanth reforms are called Terapanth. Others who follow more traditional practices are called Bisapanthi. In practice, the division between the sub-sects is unimportant, and separate institutions do not exist.