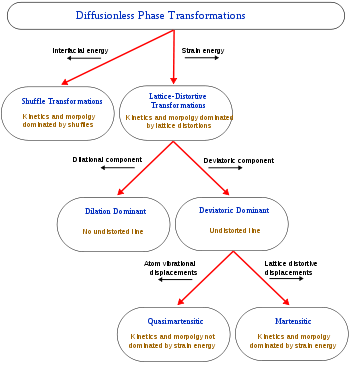 A diffusionless transformation is a phase change that occurs without the long-range diffusion of atoms but rather by some form of cooperative, homogeneous movement of many atoms that results in a change in crystal structure. These movements are small, usually less than the interatomic distances, and the atoms maintain their relative relationships. The ordered movement of large numbers of atoms lead some to refer to these as military transformations in contrast to civilian diffusion-based phase changes.[1]

When a structural change occurs by the coordinated movement of atoms (or groups of atoms) relative to their neighbors then the change is termed displacive transformation. This covers a broad range of transformations and so further classifications have been developed [Cohen 1979].

The first distinction can be drawn between transformations dominated by lattice-distortive strains and those where shuffles are of greater importance.

Homogeneous lattice-distortive strains, also known as Bain strains, are strains that transform one Bravais lattice into a different one. This can be represented by a strain matrix S which transforms one vector, y, into a new vector, x:

This is homogeneous as straight lines are transformed to new straight lines. Examples of such transformations include a cubic lattice increasing in size on all three axes (dilation) or shearing into a monoclinic structure.

Shuffles, as the name suggests, involve the small movement of atoms within the unit cell. As a result pure shuffles do not normally result in a shape change of the unit cell - only its symmetry and structure.

The difference between austenite and martensite is, in some ways, quite small: while the unit cell of austenite is, on average, a perfect little cube, the transformation to martensite sees this cube distorted by interstitial carbon atoms that do not have time to diffuse out during displacive transformation, so that it is a tiny bit longer than before in one dimension and a little bit shorter in the other two. The mathematical description of the two structures is quite different, for reasons of symmetry (see external links), but the chemical bonding remains very similar. Unlike cementite, which has bonding reminiscent of ceramic materials, the hardness of martensite is difficult to explain in chemical terms.

The explanation hinges on the crystal's subtle change in dimension. Even a microscopic crystallite is millions of unit cells long. Since all of these units face the same direction, distortions of even a fraction of a percent become magnified into a major mismatch between neighboring materials. The mismatch is sorted out by the creation of a myriad of crystal defects, in a process reminiscent of work hardening. As in work-hardened steel, these defects prevent atoms from sliding past one another in an organized fashion, causing the material to become harder.

Shape memory alloys also have surprising mechanical properties, that were eventually explained by an analogy to martensite. Unlike the iron-carbon system, alloys in the nickel-titanium system can be chosen that make the "martensitic" phase thermodynamically stable.