In electrical engineering, a protective relay is a complex electromechanical apparatus, often with more than one coil, designed to calculate operating conditions on an electrical circuit and trip circuit breakers when a fault is detected. Unlike switching type relays with fixed and usually ill-defined operating voltage thresholds and operating times, protective relays have well-established, selectable, time/current (or other operating parameter) curves. Such relays may be elaborate, using arrays of induction disks, shaded-pole magnets, operating and restraint coils, solenoid-type operators, telephone-relay contacts, and phase-shifting networks. Protection relays respond to such conditions as over-current, over-voltage, reverse power flow, over- and under- frequency. Distance relays trip for faults up to a certain distance away from a substation but not beyond that point. An important transmission line or generator unit will have cubicles dedicated to protection, with many individual electromechanical devices. The various protective functions available on a given relay are denoted by standard ANSI Device Numbers. For example, a relay including function 51 would be a timed overcurrent protective relay.

Design and theory of these protective devices is an important part of the education of an electrical engineer who specializes in power systems. Today these devices are nearly entirely replaced with microprocessor-based digital protective relays (numerical relays) that emulate their electromechanical ancestors with great precision and convenience in application. By combining several functions in one case, numerical relays also save capital cost and maintenance cost over electromechanical relays. However, due to their very long life span, tens of thousands of these "silent sentinels" are still protecting transmission lines and electrical apparatus all over the world.

"Armature"-type relays have a pivoted lever supported on a hinge or knife-edge pivot, which carries a moving contact. These relays may work on either alternating or direct current, but for alternating current, a shading coil on the pole is used to maintain contact force throughout the alternating current cycle. Because the air gap between the fixed coil and the moving armature becomes much smaller when the relay has operated, the current required to maintain the relay closed is much smaller than the current to first operate it. The "returning ratio" or "differential" is the measure of how much the current must be reduced to reset the relay.

"Moving coil" meters use a loop of wire turns in a stationary magnet, similar to a galvanometer but with a contact lever instead of a pointer. These can be made with very high sensitivity. Another type of moving coil suspends the coil from two conductive ligaments, allowing very long travel of the coil.

"Induction" disk meters work by inducing currents in a disk that is free to rotate; the rotary motion of the disk operates a contact. Induction relays require alternating current; if two or more coils are used, they must be at the same frequency otherwise no net operating force is produced.[1]

Protective relays can also be classified by the type of measurement they make. A protective relay may respond to the magnitude of a quantity such as voltage or current. Induction types of relay can respond to the product of two quantities in two field coils, which could for example represent the power in a circuit. Although an electromechanical relay calculating the ratio of two quantities is not practical, the same effect can be obtained by a balance between two operating coils, which can be arranged to effectively give the same result.[1]

Several operating coils can be used to provide "bias" to the relay, allowing the sensitivity of response in one circuit to be controlled by another. Various combinations of "operate torque" and "restraint torque" can be produced in the relay.

By use of a permanent magnetic in the magnetic circuit, a relay can be made to respond differently to current in one direction than in another. Such polarized relays are used on direct-current circuits to detect, for example, reverse current into a generator. These relays can be made bistable, maintaining a contact closed with no coil current and requiring reverse current to reset.

For AC circuits, the principle is extended with a polarizing winding connected to a reference voltage source.

In a large installation of electromechanical relays, it would be difficult to determine which device originated the signal that tripped the circuit. This information is useful to operating personnel to determine the likely cause of the fault and to prevent its re-occurrence. Relays may be fitted with a "target" or "flag" unit, which is released when the relay operates, to display a distinctive colored signal when the relay has tripped.[1]

An "overcurrent relay" is a type of protective relay which operates when the load current exceeds a preset value. The ANSI device number is 50 for an instantaneous overcurrent (IOC), 51 for a time over current (TOC). In a typical application the overcurrent relay is connected to a current transformer and calibrated to operate at or above a specific current level. When the relay operates, one or more contacts will operate and energize to trip (open) a circuit breaker.

These robust and reliable electromagnetic relays use the induction principle discovered by Galileo Ferraris in the late 19th century. The magnetic system in induction disc overcurrent relays is designed to detect overcurrents in a power system and operate with a pre-determined time delay when certain overcurrent limits have been reached. In order to operate, the magnetic system in the relays produces torque that acts on a metal disc to make contact, according to the following basic current/torque equation:

K – is a constant

ϕ1 and ϕ2 are the two fluxes

θ is the phase angle between the fluxes

In an overcurrent condition, a value of current will be reached that overcomes the control spring pressure on the spindle and the braking magnet, causing the metal disc to rotate towards the fixed contact. This initial movement of the disc is also held off to a critical positive value of current by small slots that are often cut into the side of the disc. The time taken for rotation to make the contacts is not only dependent on current but also the spindle backstop position, known as the time multiplier (tm). The time multiplier is divided into 10 linear divisions of the full rotation time.

Providing the relay is free from dirt, the metal disc and the spindle with its contact will reach the fixed contact, thus sending a signal to trip and isolate the circuit, within its designed time and current specifications. Drop off current of the relay is much lower than its operating value, and once reached the relay will be reset in a reverse motion by the pressure of the control spring governed by the braking magnet.

The most common form of protection on high voltage transmission systems is distance relay protection. Power lines have set impedance per kilometre and using this value and comparing voltage and current the distance to a fault can be determined. The ANSI standard device number for a distance relay is 21.

Another common form of protection for high voltage apparatus such as transformers and power lines is current differential. This type of protection works on the basic theory of Kirchhoff's current law which states that the sum of the currents entering a node will equal zero. It is important to note the direction of the currents as well as the magnitude, as they are vectors. It requires a set of current transformers (smaller transformers that transform currents down to a level which can be measured) at each end of the power line, or each side of the transformer. The current protection relay then compares the currents and calculates the difference between the two. As an example, a power line from one substation to another will have a current differential relay at both substations which communicate with each other. In a healthy condition, the relay at substation A may read 500 amps (power exporting) and substation B will read 500 amps (power importing). If a path to earth or ground develops there will be a surge of current. As supply grids are generally well interconnected the fault in the previous example will be fed from both ends of the power line. The relay at substation A will see a massive increase in current and will continue to export. Substation B will also see a massive increase in current, however it will now start to export as well. In turn the protection relay will see the currents travelling in opposite directions (180 degrees phase shift) and instead of cancelling each other out to give a summation of zero it will see a large value of current. The relays will trip the associated circuit breakers. This type of protection is called unit protection, as it only protects what is between the current transformers. It is important to note that generally the higher the currents in the lines the larger the differential current required for the relay to see it as a fault. This is basically done due to small mismatches in current transformers. Small errors will increase as current increases to the point where the error could cause a false trip if the current differential relay only had an upper limit instead of the rising differential characteristic. It is also important to note that CTs have a point where the core saturates and the current in the CT is no longer proportional to the current in the line. A CT can become inaccurate or even saturate because of a fault outside of it's protected zone (through fault) where the CTs see a large magnitude but still in the same direction.

A very common example of a differential current relay is the ground fault current interrupter (GFCI), or Residual-current device.

Static relays with no or few moving parts became practical with the introduction of the transistor. Static relays offer the advantage of higher sensitivity than purely electromechanical relays, because power to operate output contacts is derived from a separate supply, not from the signal circuits. Static relays elminated or reduced contact bounce, and could provide fast operation, long life and low maintenance. 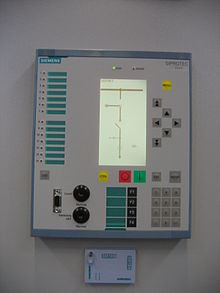