Heterochromia iridum
Not to be confused with Heterochromatin or dichromatic (disambiguation).

Complete heterochromia in human eyes: one brown and one hazel

In anatomy, heterochromia refers to a difference in coloration, usually of the iris but also of hair or skin. Heterochromia is a result of the relative excess or lack of melanin (a pigment). It may be inherited, or caused by genetic mosaicism, disease or injury.[1] 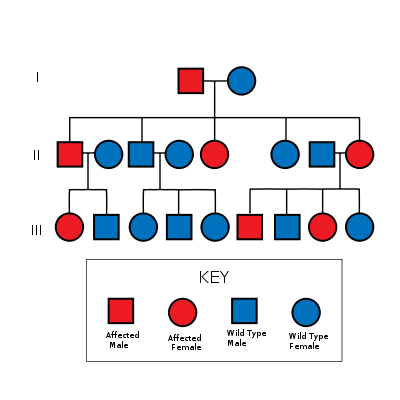 Heterochromia that is congenital is usually inherited as an autosomal dominant trait.

Heterochromia that is acquired is usually due to injury, inflammation, the use of certain eyedrops,[12] or tumors.

Heterochromia has also been observed in those with Duane syndrome.[18][19]

Example of Central Heterochromia showing a gold to blue iris.

Central heterochromia is an eye condition where there are two colors in the same iris; the central (pupillary) zone of the iris is a different color than the mid-peripheral (ciliary) zone.

Example of Central Heterochromia showing a brown to blue iris.

Example of Central Heterochromia showing an orange to blue iris.

Eye color is determined primarily by the concentration and distribution of melanin within the iris tissues; anything affecting those factors may result in a difference of color being observed.[2]

The human iris can be seen in a number of various colors. There are three true colors in human eyes that determine the outward appearance: brown, yellow, and grey. The amount of each color an individual has determines the appearance of his or her eye color.[20] 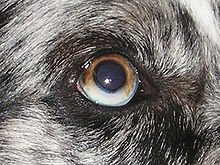