Difference between train and tram rails

Difference between train and tram rails

A railroad or railway is a track where the vehicle travels over two parallel steel bars, called rails. The rails support and guide the wheels of the vehicles, which are traditionally either trains and trams. Modern light rail is a relatively new innovation which combines aspects of those two modes of transport. However there are some fundamental design differences in the track and wheel design which are important, especially where trams or light railways and trains have to share a section of track, as sometimes happens in congested towns. 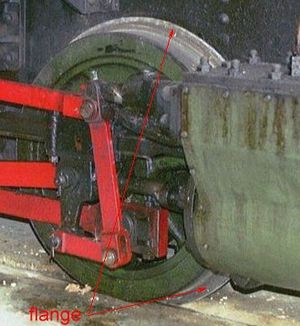 A flanged wheel on a train 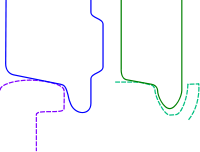 Difference in form and profile of the wheel and the rail of a train (left, blue) and a tram (right, green).

Both trams and trains have flanged iron wheels with a horizontal section transferring the vehicle weight to the rail and a vertical flange "inboard" to guide the vehicle along the rail using its inside edge.

Difference in technique in curves

Rail vehicle wheels are usually mounted on a solid axle, so they turn at the same speed. When a vehicle turns a corner, the outer wheel has to travel further than the inner wheel. On a road vehicle, this is usually achieved by allowing the wheels to move independently, and fixing the front wheels in an arrangement known as Ackermann steering geometry.

Trains and trams can turn corners without wheel-slip because the outer horizontal part of the wheels has a slightly tapered rim. The guide flange (ridge) is on the inside to prevents the rail vehicle from slipping sideways off the rails. The horizontal (cone shaped) rim makes contact with the slightly convex top of a steel rail in different (horizontal) places so that the outer wheel has a larger effective diameter than the inner wheel..

With both tram and train wheels, this happens naturally because the tires are cone shaped sloping surfaces: the inside diameter is a few millimeters larger than that on the outside. As the track starts to curve, the train will initially try to run straight on. The wheel flange presses against the side of the curved rail So the "contact point" between rail and wheel will move a few millimeters outwards, making the effective diameter of the outer wheel temporarily larger, and equally opposite: the effective diameter of the inner wheel will effectively become temporarily smaller. This technique works well on large-radius curves which are canted, but not so well on tight curves and railway Railroad switches (also known as " points"). This is because the geometry or cant of the track is more difficult to optimize for every possible combination of vehicle and direction of travel.

City trams often use tight curves - often with a radius of less than about 20 meters (roughly 65 ft), and canting may impossible because the surface is shared with road vehicles or pedestrian zones or sidewalks, so the track often has to be level with the road surface or pavement. In sharp curves, the rail grooves are sometimes made very shallow, which causes the outer wheel to temporarily ride up onto the edge of its flange. This increases the wheel diameter and the curve can be taken more easily. In extreme cases, it may even be that the rail has a groove so that the rim of the flange can take most of the weight, the "out-board" tyre (on the outer radius of the outer rail) being reduced to effectively no more than a vertical iron plate.[citation needed]

In contrast, a train wheel is almost never designed to transfer weight through the flange rim, and some tires may be damaged if this should happen even once.[citation needed] 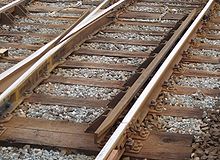 Right, the guard rail, which prevents the opposite wheel from derailing on the frog common crossing at the left.

The point where two straight but intersecting railroads cross is called a frogA groove through each rail allows the wheel flanges to pass through the intersecting rails, and without countermeasures each wheel would dip into the groove and strike the frog point gap causing excessive wear. Where two tracks join and the vehicle can be directed in one of two directions is called a railway switch which works on the same principle, except the inner rail is almost continuous and the outer rail has a gap for the flange to pass through.

With a train this problem is solved by using a wide tire. Train rails cross at a shallow angle. In the middle of the interchange there is a supporting frog, where the tire is guided on each side by guide rails, some portion of the tire always maintains rail contact. This method is not feasible with trams and light railways.

Tram tires are generally narrower than train tires. additionally steeper crossing angles and tighter curve radius is more likely than for tracks designed for solely trains. To cope with this difficulty the wheels of trams can temporarily transfers all the weight of the tram onto the flange to reduces wear on both the frog point or rail-gap and the horizontal surface of the tram wheels. Train wheels are not designed to bear such weight on their flanges.

A tram wheel wheel which runs on the flange rather on the horizontal tyre has a larger effective diameter, so the distance travelled per revolution is greater. On the track on the outside of the curve this is an advantage, it may be necessary to compensate the inner wheel or allow for some slippage. Modern trams and trams tend to have thicker and wider tires which allows for a greater (horizontal) conical section and so greater effective diameter variation and turning ability.

There is a significant difference between relatively light tram rails and full-scale train rails designed to carry heavy loads. At train junctions, the gap in the frog or switch rail is large and deep. Because train wheels are larger and the flanges do not have to carry vertical loads, they can be designed to cope with gaps in the rail which might defeat the smaller tram-wheels.

Given the above concerns, in particular the difficulty ti introduce a surface to allow the tram flange to take the weight of the vehicle, a tram with traditional wheels can not drive on train rails without "falling into the gap" designed for the flanges of vehicles on the crossing line.. Modern light rail, tram, or tram-train equipment, using tram rails in city center, and on interurban sections of train railroads now have interoperable flanges combined with wide tires.

The main problem with a train on tram rails are the relatively small dimensions of frog and switch gaps and channels designed to accommodate the flanges of vehicles on the crossing line. The larger dimensions of train wheels increases the risk of derailment at these points. On routes where train carriages are driven over on tram tracks (as in the past in The Hague), wider and deeper grooves are required as a compromise that practical but not optimal, requiring greater care and lower speeds for both types of vehicle.

Many modern rural and suburban lines are compatible for use by several different types of vehicles. For example, the Narrow gauge railway used by Charleroi Metro are ridden by trams, but the tracks are built with train technology which does not permit the vertical load to be borne by the flange. The trams nonetheless run smoothly on the old NMVB tram net in Anderlues, where shallow groove rails are used. Between The Hague and Rotterdam, an old railway line has been converted for RandstadRail into a route able to carry both the Rotterdam Metro which uses train technology as well as The Hague tram technology vehicles.