Squirt (soft drink)
This article is about the soft drink. For other uses, see Squirt (disambiguation). 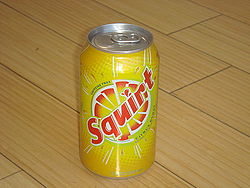 Squirt is a caffeine-free, citrus-flavored, carbonated soft drink, created in 1938 in Phoenix, Arizona.[1]

Squirt was created by Herb Bishop in 1938, after experimenting with a similar citrus drink, Citrus Club. He created a new, carbonated drink which required both less fruit juice and less sugar. Bishop declared that it was the "freshest, most exciting taste in the marketplace".[1]

The product received its name because the drink was claimed to "squirt" into one's mouth like a freshly squeezed grapefruit.[1]

In 1941, a mascot named "Lil' Squirt" was introduced to the product line's marketing to personify the brand. The mascot proved useful in broadening public awareness of the product. Squirt became a popular soft drink in many parts of the country. In addition to being a well-liked soft drink, Squirt later established itself as a mixer in the 1950s.

Ownership of the Squirt brand has changed hands several times. It is currently property of Dr Pepper Snapple Group.[1]

Squirt is naturally flavored but contains less than 1% grapefruit juice. Like many other soft drinks, the packaging of Squirt has varied over the years.

In 1983, Diet Squirt, the first soft drink in the United States to be sweetened with aspartame, was introduced.[1]

In the mid-1980s, a vitamin-C-enriched Diet Squirt Plus was briefly marketed.[citation needed]

A man who drank 8 liters (2.1 US gal; 1.8 imp gal) of Ruby Red Squirt daily had a reaction that caused his skin color to turn red and produced lesions diagnosed as bromoderma. The excessive quantities, together with the fact that the man had a higher than normal sensitivity to bromine, made this an unusual case.[2]