The loss tangent is a parameter of a dielectric material that quantifies its inherent dissipation of electromagnetic energy. The term refers to the tangent of the angle in a complex plane between the resistive (lossy) component of an electromagnetic field and its reactive (lossless) component.

For time varying electromagnetic fields, the electromagnetic energy is typically viewed as waves propagating either through free space, in a transmission line, in a microstrip line, or through a waveguide. Dielectrics are often used in all of these environments to mechanically support electrical conductors and keep them at a fixed separation, or to provide a barrier between different gas pressures yet still transmit electromagnetic power. Maxwell’s equations are solved for the electric and magnetic field components of the propagating waves that satisfy the boundary conditions of the specific environment's geometry.[1] In such electromagnetic analyses, the parameters permittivity ε, permeability μ, and conductivity σ represent the properties of the media through which the waves propagate. The permittivity can have real and imaginary components such that

If we assume that we have a wave function such that

where ε″ is the imaginary amplitude of permittivity attributed to bound charge and dipole relaxation phenomena, which gives rise to energy loss that is indistinguishable from the loss due to the free charge conduction that is quantified by σ. The component ε′ represents the familiar lossless permittivity given by the product of the free space permittivity and the relative permittivity, or ε′ = ε0 εr. The loss tangent is then defined as the ratio (or angle in a complex plane) of the lossy reaction to the electric field E in the curl equation to the lossless reaction:

For dielectrics with small loss, this angle is ≪ 1 and tan δ ≈ δ. After some further maths to obtain the solution for the fields of the electromagnetic wave, it turns out that the power decays with propagation distance z as

,
ω is the angular frequency of the wave, and
λ is the wavelength in the dielectric.

There are often other contributions to power loss for electromagnetic waves that are not included in this expression, such as due to the wall currents of the conductors of a transmission line or waveguide. Also, a similar analysis could be applied to the permeability where

with the subsequent definition of a magnetic loss tangent

For discrete electrical circuit components, a capacitor is typically made of a dielectric placed between conductors. The lumped element model of a capacitor includes a lossless ideal capacitor in series with a resistor termed the equivalent series resistance (ESR), as shown in the figure below.[2] The ESR represents losses in the capacitor. In a low-loss capacitor the ESR is very small, and in a lossy capacitor the ESR can be large. Note that the ESR is not simply the resistance that would be measured across a capacitor by an ohmmeter. The ESR is a derived quantity representing the loss due to both the dielectric's conduction electrons and the bound dipole relaxation phenomena mentioned above. In a dielectric, only one of either the conduction electrons or the dipole relaxation typically dominates loss. For the case of the conduction electrons being the dominant loss, then

where C is the lossless capacitance. 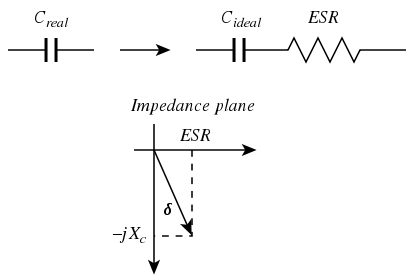 A real capacitor has a lumped element model of a lossless ideal capacitor in series with an equivalent series resistance (ESR). The loss tangent is defined by the angle between the capacitor's impedance vector and the negative reactive axis.

When representing the electrical circuit parameters as vectors in a complex plane, known as phasors, a capacitor's loss tangent is equal to the tangent of the angle between the capacitor's impedance vector and the negative reactive axis, as shown in the diagram to the right. The loss tangent is then

Since the same AC current flows through both ESR and Xc, the loss tangent is also the ratio of the resistive power loss in the ESR to the reactive power oscillating in the capacitor. For this reason, a capacitor's loss tangent is sometimes stated as its dissipation factor, or the reciprocal of its quality factor Q, as follows