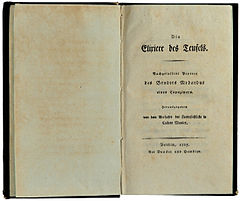 The Devil's Elixir (Die Elixiere des Teufels) is a novel by E. T. A. Hoffmann. Published in 1815, the basic idea for the story was adopted from Matthew Gregory Lewis's novel The Monk, which is itself mentioned in the text.

Although Hoffmann himself was not particularly religious, he was nevertheless so strongly impressed by the life and atmosphere on a visit to a monastery of the Order of Friars Minor Capuchin, that he determined to write the novel in that religious setting. Characteristically for Hoffmann, he wrote the entire novel in only a few weeks. It can be classified in the subgenre of dark romanticism.

The Devil's Elixirs is predominantly a first person narrative related by the Capuchin monk Medardus. He is ignorant of his family history and what he knows about his childhood is based upon fragments of memory and a few events his mother has explained to him.[1][2]

Medardus cannot resist the Devil's elixir, which has been entrusted to him and which awakens in him sensual desires. Sent from his cloister to Rome, he pushes (whether or not intentionally is ambiguous) a prince (unbeknown to the monk his half-brother) from a "Teufelssitz" ("devil's perch") disguised as a monk as a means of seeing his lover (the half-sister of both the prince and Medardus, again both are ignorant of this). The prince becomes his lunatic doppelgänger, whose path he crosses multiple times after Medardus abandons his ecclesiastical position, drifting throughout the world. The story centers on his love for a young princess, Aurelien. After murdering her stepmother (the above mentioned half-sister) and brother, Medardus flees to a city. After his devilish connection is found out by an old painter, Medardus flees the city with the help of a "foolish" hair dresser with two personalities, who serves as a foil to the destructive schizophrenia of Medardus, gaily living as both Peter Schoenfeld and Pietro Bellocampo. He arrives at a prince's court, soon followed by Aurelien. She recognizes the monk as her brother's murderer and Medardus is thrown in jail. He is released only after the doppelgänger appears, and is taken as the murderer. Having passed himself off for a Polish noble while in prison he is engaged to Aurelien. On their wedding day however, he is overcome by a fit of madness, hearing the voice of the doppelgänger, which has been occurring ever more frequently to this point; stabs Aurelien, frees the doppelgänger as he was being taken to his execution, and runs about the wiledrness fighting the doppelgänger for months until he awakens in an Italian cloister, once more saved by Pietro/Peter. He is once more wearing his frock with the name Medardus stitched on it. Returned to his original identity Medardus undergoes an intense process of repentance and discovers his family history by reading the diary of a painter. After meeting with the Pope and becoming involved in potentially fatal Vatican political intrigue (which suggest he may still have devilish ambitions to power) Medardus returns to the German cloister. A great fest is being held - Aurelien is soon to take her final vows to become a nun. Once again he must struggle with his lust. Just as he seems to have mastered it the doppelgänger rushes in and stabs Aurelien, fatally this time, and once more escapes. At the end, he writes this manuscript as an act of penance. A final note from the librarian of the cloister reveals circumstances of his death - namely a hysterical laughing which casts doubt on his implied redemption from satanic possession.[3]

This article incorporates information from the revision as of March 28, 2008 of the equivalent article on the German Wikipedia.