Dictyostelium are Dictyostelid single celled eukaryotic, phagotrophic bacterivores usually present and often abundant in terrestrial ecosystems and are a normal component of the microflora in cells that help in soil balance between bacteria and soils. [1] The amoeba are often grouped as slime mold . The order is the Dictyosteliida. (Dictyostelid cellular slime molds or social amoebae.) Dictyosteliida contains organisms that hover on the borderline between uni- and multicellularity. The protists are often found on organic matter or in soils and caves. Typically, cells grow separately and independently but interact to form multi-cellular structures when challenged by adverse conditions such as starvation. Some have argued this is a form of intelligence. Up to 100,000 cells signal each other by releasing the chemoattractant cAMP and aggregate together by chemotaxis to form a mound that is surrounded by an extracellular matrix. [2] Basic processes of development such as differential cell sorting, pattern formation, stimulus-induced gene expression, and cell-type regulation are common to Dictyostelium and metazoans.

The cellular slime molds were formerly considered to be "lower fungi" since their discovery in 1869 by Brefeld. Although they superficially resemble fungi in some respects, they are included in the kingdom Protista and they are not actually slimy. [3] Individual cells resemble small amoebae and move and feed in an amoeboid manner, thus they are called "myxamoebae" (to distinguish them from true amoebae). D. discoideum was discovered in 1935 in a forest in North Carolina and has since been found, along with similar genera, in many such environments around the world. The myxamoebae feed on bacteria in decaying vegatation, and reproduce by binary fission as do all amoeba. [4] D. discoideum is the most studied of the genus. 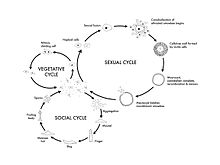 An important philosophy of experimental biology holds that radically different organisms solve similar problems in similar ways. While a primary goal of a scientist may be to discover what is wrong with the cell recognition systems of human cancer cells, the genetic mechanisms behind the problem may be too complex to unravel. While the human genome is large and highly complex, that of the cellular slime mold D. discoideum, which is presently under study in a great many laboratories in cell biology, is about 100 times smaller than the human genome. Dictyostelium is easy to propagate, and the complete life cycle can be induced in the laboratory. It is a practical matter then, to determine the entire gene sequence for Dictyostelium, and to learn the basics of many cellular processes through genetic engineering and experimentation. The genome was sequenced by 2005[5].

Most of its life, this haploid social amoeba undergoes a vegetative cycle, preying upon bacteria in the soil, and periodically dividing mitotically. When food is scarce, either the sexual cycle or the social cycle begins. Under the social cycle, amoebae aggregate to cAMP by the thousands, and form a motile slug, which moves towards light. Ultimately the slug forms a fruiting body in which about 20% of the cells die to lift the remaining cells up to a better place for sporulation and dispersal. Under the sexual cycle, amoebae aggregate to cAMP and sex pheromones, and two cells of opposite mating types fuse, and then begin consuming the other attracted cells. Before they are consumed, some of the prey cells form a cellulose wall around the entire group. When cannibalism is complete, the giant diploid cell is a hardy macrocyst which eventually undergoes recombination and meiosis, and hatches hundreds of recombinants. [6] [7]

Professor John Tyler Bonner has spent a lifetime researching the slime molds and created a number of fascinating videos in the 1940s to show the life cycle. He has mostly studied D. discoideum In the videos intelligence appears to be observed as the single cells, after separation, regroup into a cellular mass. The time-lapse film captivated audiences; indeed, Bonner when giving conferences has stated that the film “always stole the show”. [8] The video is available on YouTube. [9]

Taxonomy of D.sp is complicated. It has also been confused by the different forms in the life cycle stages and by the similar Polysphondylium spp. Below are some reported examples.