Sequential hermaphroditism (called dichogamy in botany) is a type of hermaphroditism that occurs in many fish, gastropods and plants. Here, the individual is born one sex and changes sex at some point in their life. They can change from a male to female (protandry), or from female to male (protogyny).[1] Despite which sex the organism changes to, those that change gonodal sex can have both female and male germ cells in the gonads or can change from one complete gonodal type to the other during their last life stage.[2] 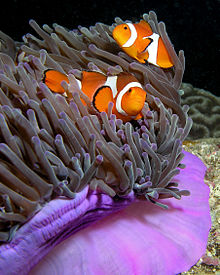 Protandry refers to organisms that are born male and at some point in their lifespan change sex to female. Protandrous animals include clownfish. Clownfish have a very structured society. In the Amphiprion percula species, there are zero to four individuals excluded from breeding and a breeding pair living in a sea anemone. Dominance is based on size, the female being the largest and the male being the second largest. The rest of the group is made up of progressively smaller non-breeders, which have no functioning gonads.[3] If the female dies, the male gains weight and becomes the female for that group. The largest non-breeding fish then sexually matures and becomes the male of the group.[4]

Other examples of protandrous animals include:

Protogyny refers to organisms that are born female and at some point in their lifespan change sex to males. Common model organisms for this type of sequential hermaphroditism are wrasses. They are one of the largest families of coral reef fish and belong to the Labridae family. Wrasses are found around the world in all marine habitats and tend to bury themselves in sand at night or when they feel threatened.[6] In wrasses, the larger of the two fish is the male, while the smaller is the female. In most cases, females and immature have a uniform color while the male has the terminal bicolored phase.[7] Large males hold territories and try to pair spawn while small to mid-size initial-phase males live with females and group spawn.[8] In other words, both the initial and terminal phase males can breed; they differ however in the way they do it.

In the California Sheephead (Pimelometopon pulchrum), a type of wrasse, when the female changes to male, the ovaries degenerate and spermatogenic crypts appear in the gonads. The general structure of the gonads remains ovarian after the transformation and the sperm is transported through a series of ducts on the periphery of the gonad and oviduct. Here sex change is age dependant. For example, the California sheephead stays a female for four years before changing sex.[7]

Other examples of protogynous organisms include:

Ghiselin proposed three models for hermaphroditism in 1969 in his paper titled “The evolution of hermaphroditism among animals”. The ‘’low-density model’’ states that individuals have characteristics that reduce the opportunity for mating; this model cannot be applied to sequential hermaphroditism. The ‘’gene dispersal model’’ is based on the idea that limitations on dispersal may influence population structure or genetical environment and it can be separated into two versions: the inbreeding version and the sampling-error version. This theory of gene dispersal can be applied to sequential hermaphrodites, especially the inbreeding version. The inbreeding version is based upon the fact that both protandry and protogyny help prevent inbreeding in plants and thus one can make the same assumption that in animals it works by reducing the probability of this occurring among siblings. The sampling-error version is based on the reality that the genetical environment is influenced by genetic drift and similar phenomena in small populations. The two aspects of these hypotheses influenced by hermaphroditism, that is inbreeding and sampling-error, result in the same thing, reduction of genetic variability. In other words being a hermaphrodite would increase genetic variability and thus be considered advantageous to the organism. This theory of gene dispersal can be applied to sequential hermaphrodites, especially the inbreeding version. Lastly, the ‘’size-advantage model’’ states that reproductive functions are carried out better if the individual is a certain size/age. Assuming that the reproductive functions of one sex are better performed at a certain size, then an organism would assume the sex that its size allows to perform the best. This would increase its reproductive potential and fitness. For example, eggs are larger than sperm, thus if you are a big you are able to make more eggs so being female when big is advantageous, however the size advantage relationship is really not as simple as the example just mentioned, but it allows for a better understanding of it.[9]

In most ectotherms body size and female fecundity are positively correlated.[1] This supports Ghiselin’s size-advantage model, which is still widely accepted today. Kazancioglu and Alonzo (2010) performed the first comparative analysis of sex change in Labridae. Their analysis supports the size-advantage model by Ghiselin and suggest that sequential hermaphroditism is correlated to the size-advantage. They determined that dioecy was less likely to occur when the size advantage is stronger than other advantages[10]

Warner suggests that selection for protandry may occur in populations where female fecundity is augmented with age and individuals mate randomly. Selection for protogyny may occur where there are traits in the population that depress male fecundity at early ages (territoriality, mate selection or inexperience) and when female fecundity is decreased with age, the latter seems to be rare in the field.[1] An example of territoriality favoring protogyny occurs when there is a need to protect their habitat and being a large male is advantageous for this purpose. In the mating aspect, a large male has a higher chance of mating, while this has no effect on the female mating fitness.[10] Thus, he suggests that female fecundity has more impact on sequential hermaphroditism that the age structures of the population.[1]

The size-advantage model predicts that sex change would only be absent if the relationship between size/age with reproductive potential is identical in both sexes. With this prediction one would assume that hermaphroditism is very common, but this is not the case. Sequential hermaphroditism is very rare and according to scientists this is due to some cost that decreases fitness in sex changers as opposed to those who don’t change sex. Kazanciglu and Alonzo confirmed this in 2009. They found that the costs of changing sex only favored dioecy when the cost was very large but that some groups favored hermaphroditism. This indicates that the cost of sex change does not explain the rarity of sequential hermaphroditism by itself.[11]

Many studies have focused on the proximate causes of sequential hermaphroditism. The role of aromatase has been widely studied in this area. Aromatase is an enzyme that controls the androgen/estrogen ratio in animals by catalyzing the conversion of testosterone into oestradiol, which is irreversible. It has been discovered that the aromatase pathway mediates sex change in both directions.[12] Many studies also involve understanding the effect of aromatase inhibitors on sex change. One such study was performed by Kobayashi et al. In their study they tested the role of estrogens in male three-spot wrasses (Halichoeres trimaculatus). They discovered that fish treated with aromatase inhibitors showed decreased gonodal weight, plasma estrogen level and spermatogonial proliferation in the testis as well as increased androgen levels. Their results suggest that estrogens are important in the regulation of spermatogenesis in this protogynous hermaphrodite.[13] 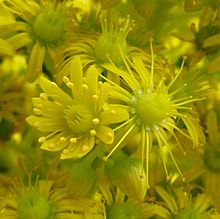 Historically, dichogamy has been regarded as a mechanism for reducing inbreeding (e.g., Darwin, 1862). However, a survey of the angiosperms found that self-incompatible (SI) plants, which are incapable of inbreeding, were as likely to be dichogamous as were self-compatible (SC) plants (Bertin, 1993). This finding led to a reinterpretation of dichogamy as a more general mechanism for reducing the impact of pollen-pistil interference on pollen import and export (reviewed in Lloyd & Webb, 1986; Barrett, 2002). Unlike the inbreeding-avoidance hypothesis, which focused on female function, this interference-avoidance hypothesis considers both gender functions.

In many hermaphroditic species, the close physical proximity of anthers and stigma makes interference unavoidable, either within a flower or between flowers on an inflorescence. Within-flower interference, which occurs when either the pistil interrupts pollen removal or the anthers prevent pollen deposition, can result in autonomous or facilitated self-pollination (Lloyd & Webb, 1986; Lloyd & Schoen, 1992). Between-flower interference results from similar mechanisms, except that the interfering structures occur on different flowers within the same inflorescence and it requires pollinator activity. This results in geitonogamous pollination, the transfer of pollen between flowers of the same individual (Lloyd & Schoen, 1992; de Jong et al., 1993). In contrast to within-flower interference, geitonogamy necessarily involves the same processes as outcrossing: pollinator attraction, reward provisioning, and pollen removal. Therefore, between-flower interference not only carries the cost of self-fertilization (inbreeding depression; Charlesworth & Charlesworth, 1987; Husband & Schemske, 1996), but also reduces the amount of pollen available for export (so-called "pollen discounting"; Harder & Wilson, 1998]). Because pollen discounting diminishes outcross siring success, interference avoidance may be an important evolutionary force in floral biology (Harder & Barrett, 1995, 1996; Harder & Wilson, 1998; Barrett, 2002).

Protandry may be particularly relevant to this compromise, because it often results in an inflorescence structure with female phase flowers positioned below male phase flowers (Bertin & Newman, 1993). Given the tendency of many insect pollinators to forage upwards through inflorescences (Galen & Plowright, 1988), protandry may enhance pollen export by reducing between-flower interference (Darwin, 1862; Harder et al., 2000). Furthermore, this enhanced pollen export should increase as floral display size increases, because between-flower interference should increase with floral display size. These effects of protandry on between-flower interference may decouple the benefits of large inflorescences from the consequences of geitonogamy and pollen discounting. Such a decoupling would provide a significant reproductive advantage through increased pollinator visitation and siring success.

Harder et al. (2000) demonstrated experimentally that dichogamy both reduced rates of self-fertilization and enhanced outcross siring success through reductions in geitonogamy and pollen discounting, respectively. Routley & Husband (2003) examined the influence of inflorescence size on this siring advantage and found a bimodal distribution with increased siring success with both small and large display sizes.

The length of stigmatic receptivity plays a key role in regulating the isolation of the male and female stages in dichogamous plants, and stigmatic receptivity can be influenced by both temperature and humidity.[14] Another study by Jersakova and Johnson, studied the effects of protandry on the pollination process of the moth pollinated orchid, ‘’Satyrium longicauda’’. They discovered that protandry tended to reduce the absolute levels of self-pollination and suggest that the evolution of protandry could be driven by the consequences of the pollination process for male mating success.[15] Another study that indicated that dichogamy might increase male pollination success was the study performed by Dai and Galloway.[16]