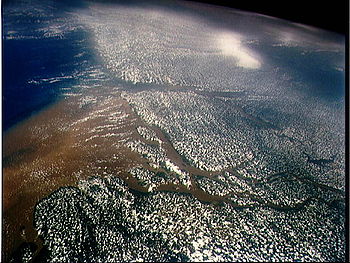 Diathermancy is the property of some fluids to get sun rays through them without being heated. Therefore, a diathermanous fluid is Permeable by heat rays[1]). Atmospheric air is diathermanous, therefore, air it is not heated by sunshine. Water, on the contrary, is not diathermanous as we can see on a satellite image from the Amazonas Delta into the Atlantic Ocean, in which we can see no clouds over the big river because image was taken at the morning, when water is much colder than the continent and it is absorbing heat, since water lasts longer than soil in warming up, but also lasts longer in cooling down. It was Heinrich Magnus who first studied this theme in the 19th century.