The primary languages of the Calabria region are Standard Italian and many regional varieties of the Italo-Dalmatian group collectively known as Calabrian (Italian: calabrese). In addition, there is a significant Calabrian version of the Griko language and pockets of Occitan and Arbëresh.

Calabrian (it: Calabrese) is the name given to a number of dialects spoken in the Calabria region of Italy. The various dialects of Calabria are part of a strong continuum that are generally recognizable as Calabrian, but that are usually divided into two different language groups. In the northern one-third of the region, the Calabrian dialects are often classified typologically with Neapolitan language (it: Napoletano-Calabrese) and are called Northern Calabrian or just Cosentino[1]. In the southern two-thirds of the region, the Calabrian dialects are more closely related to Sicilian, grouped as Central and Southern Calabrian or simply Calabro, and are usually classified as part of Extreme Southern Italian (Italiano meridionale-estremo) language group[2]. The Amantea-Cirò line is generally considered an approximate demarcation between the Neapolitan and Sicilian language groups.

The linguistic division roughly corresponds with the historic administrative division already in place since medieval times: Calabria Citeriore (or Latin Calabria) and Calabria Ulteriore (or Greek Calabria). It must be noted this is a broad generalization and many communities in the more central parts of the region exhibit features of both language groups.

The dialects of Calabria have been extensively studied, catalogued and commented upon by German philologist Gerhard Rohlfs. From the mid-1920s to the mid-1970s, he traveled the region extensively and assembled a very extensive, multi-volume dictionary. 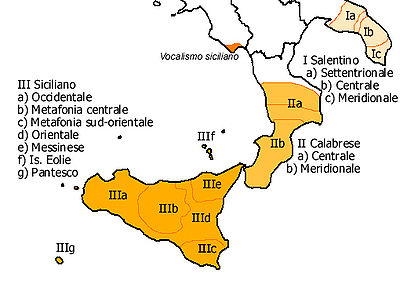 The areas where Central- Southern Calabrian (calabbrìsi or calavrìsi, in Sicilian) is spoken corresponds generally to the provinces of Reggio Calabria, Vibo Valentia, Catanzaro and the southern part of Crotone (Crotone, Isola di Capo Rizzuto, Cutro and vicinity). The term Sicilian-Calabrian is also used to distinguish the group from the Northern Calabrian group.

The primary roots of the dialects are the two ancient classical languages: Greek and Latin.[3] Southern and Central Calabrian dialects are strongly influenced by a Greek substratum and ensuing levels of Latin influence and other external Southern Italian superstrata, in part hindered by geography, resulted in the many local variations found between the idioms of Calabria.[4] Nonetheless, the dialects have a rich and varied influence from other languages, thanks to the domination and influx of different cultures. As a result French, and, to a lesser extent, Spanish have left a strong imprint.

French vocabulary entered the region via the kingdoms of the Normans and the Angevins in Calabria.

Other words derived from Spanish, Catalan and Occitan :

Comparison of the Central and Southern Calabrian Dialects

All human beings are born free and equal in dignity and rights. They are endowed with reason and conscience and should act towards one another in a spirit of brotherhood.

The Province of Cosenza.

The Northern Calabrian dialects (calabbrìse or calavrìse, in Neapolitan) are similar to other Southern Italian dialects and are significantly different from the dialects of southern Calabria. Linguistically, they are considered part of the Neapolitan group[6]. The dialects of the northern fringes of the Province of Cosenza give way to Campanian and Lucanian dialects; however, the majority of the province speaks the Cosentino dialect (u cusindinu). It is also spoken in the northern portion of the Province of Crotone and extreme north-western Province of Catanzaro.

One great aspect of Northern Calabrian is that the use of the preterite is almost absent, in great contrast to the Sicilian type dialects of the south. In Cosentino, the norm is he (or haju) pigliatu or signu jutu (literally "I took" and "I went"); whereas the preterite (distant remote tense) pigghiai or ivi would be more common in the rest of Calabria. Other aspects are the phonetic modifications similar to other Neapolitan dialects, such as where -nt is pronounced -nd (praticamente becomes praticamende), and v is usually pronounced b. In addition, spoken Cosentino is noted for its "soft" truncation of end syllables at the termination of sentences, and for the typical T/C sound in words such as ccjù (more) or cjanu (slow). As a transitional dialect between Sicilian and Neapolitan, Cosentino shares many sounds, words and features unique to each of the Sicilian and Neapolitan groups.

Like Central-Southern Calabrian, the vocabulary owes greatly to Arabic, French and especially Spanish:

Comparison of Northern and Southern Calabrian

All human beings are born free and equal in dignity and rights. They are endowed with reason and conscience and should act towards one another in a spirit of brotherhood.

Other languages in Calabria