The Daily Californian (or Daily Cal) is an independent, student-run newspaper that serves the University of California, Berkeley campus and its surrounding community. It is published Monday through Friday (but not Wednesday, owing to dwindling ad revenues) during the academic year, and twice a week during the summer. Established in 1871, The Daily Californian is one of the oldest newspapers on the West Coast, and one of the oldest college newspapers in the United States. Current circulation is about 10,000 for a campus of roughly 30,000.[1]

The Daily Californian became independent from UC Berkeley in 1971 after the campus administration fired three senior editors over an editorial that encouraged readers to "take back" People's Park. Both sides came to an agreement, and The Daily Californian gained financial and editorial independence from the university and is now published by an independent corporation called the Independent Berkeley Students Publishing Company, Inc. The paper licenses its name from the Regents of the University of California. UC Davis, originally being the University Farm for Berkeley also started their own newspaper, The California Aggie.

In the fall of 1971, The Daily Californian moved to a second floor office on the corner of Telegraph Avenue and Channing Way in Berkeley. The Daily Californian moved to two other offices, one on Shattuck Square and on Dwight Way. These moves, while necessary for the financial success of the newspaper, began to erode the student foundation that ran the newspaper. The newspaper currently resides in the 6th floor of Eshleman Hall on the UC Berkeley campus.

On November 24, 1982, three days after the November 20th Big Game (now known for The Play), early morning readers of the Daily Cal were chagrined to find in the headline of the front page: "NCAA Awards Big Game to Stanford."[2] Hundreds of copies of the Daily Cal with this fake headline had been strewn about campus in the wee hours. This was in fact a hoax perpetrated by aggrieved Stanford fans. 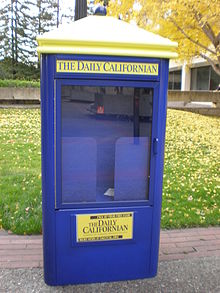 A Daily Cal rack on the UC Berkeley campus

A newspaper run completely by students worked very well, but financial and management problems dampened the first decade of The Daily Californian's independence. In the early 1980s, The Daily Californian was forced to take on loans, including one from UC Berkeley's student government, the Associated Students of the University of California (ASUC).

The Daily Californian has a history of publishing spirited editorials, and in some cases editions containing controversial editorials have been subjected to newspaper theft. In 2002, Berkeley Mayor Tom Bates agreed to pay restitution after admitting to having thrown away a thousand copies of The Daily Californian after it endorsed his opponent, then-Mayor Shirley Dean.[3] In May 2003, nearly 5,000 papers were stolen by students protesting coverage of the arrest of a Cal football player. The largest act of theft took place in November 1996 when the paper's senior editorial board endorsed Proposition 209.[1] Nearly 23,000 papers were stolen on Election Day 1996,[2] and in the following days copies of the paper were tossed off the balcony of the newspaper's office and burned in effigy.

On October 16, 2006, the Daily Cal launched its first blog, The Daily Clog. The Clog is a student-life blog that accumulates various tidbits about Berkeley and college life. It focuses on the UC campus, the city of Berkeley and Berkeley's online community. That year, the Daily Cal also recorded its first podcast and began text polling. Since then, The Daily Californian has added eight new blogs on topics ranging from Travel to an Editors' Blog.

The Daily Californian is an affiliate of UWIRE,[3] which distributes and promotes its content to their network.

Membership is open to all former staff members of The Daily Californian or student publications office staff (pre 1971). Reunions are held every October during homecoming weekend on the Berkeley campus and offer a chance for alums to mingle and trade stories with students on the current staff.

The senior editorial board encompasses all the section editors as well as the development editor and the staff representative. The following is the Senior Editorial Board membership for fall 2011:

The Daily Californian consistently receives numerous awards on a regional and national level for its comprehensive and innovative coverage of UC Berkeley, the city of Berkeley and the entire University of California system.