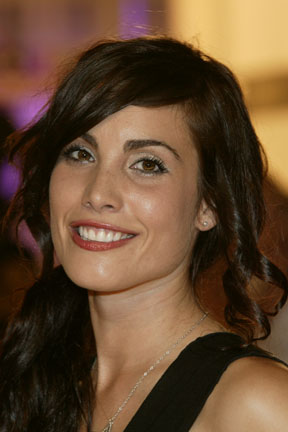 Pope was born and raised in , , with an older brother, Kris, also an actor, and a younger brother. [ [http://www.filmreference.com/film/37/Carly-Pope.html Carly Pope Biography (1980-) ] ] Pope's passion for acting began during her high school years in Vancouver where she appeared in stage classics such as "", playing Mickey, and "", playing Titania.

Pope already had a number of film and television roles to her credit ("", "") when she burst onto the American scene playing the pivotal character on the WB's high-school drama "Popular". Since then she has portrayed a heroin addict in "", played opposite in "", appeared in Jeff Probst's "", and in "Orange County". stated, "she is part of a phenomenon that's seen Hollywood agents looking more and more to Canada for fresh faces", and listed her as one of Canada's "Young Leaders."Fact|date=April 2008 In 2005 she was a guest-star in an episode of 's "" and played an aspiring social worker in "Eighteen", co-starring , and .

Pope found out the day after her high school graduation that she was going to to shoot a feature film. "Acting was always an innate ambition", said Pope. "It was where I belonged."Fact|date=April 2008 Pope trained in dance until she entered , when she began studying drama in an advanced program. An agent saw her in a school stage production, which led to Pope's screen debut in an independent children's film, "Cowboys and Aliens", on location in distant Eastern Europe. She returned and enrolled at the for a semester, but demand for the gifted young actress was already heating up. Pope's fast-rising career took off when she won a starring role in the feature film, "". She appeared in the Paramount release "Snow Day" a children's comedy with , and . Her television credits include leads in the ABC television movies "Our Guys" and "Trapped in a Purple Haze", but is best known for her role as Sam in the WB hit show "Popular". Pope compared her character, Sam, to "a builder, or a contractor.Fact|date=April 2008 She has all the right tools, but doesn't know how to use them properly." Sam doesn't realize yet just how unique she already is. "She's trying too hard", continued Pope.Fact|date=April 2008 "Her actions don't match up to her convictions, and that's what she still has to learn."Fact|date=April 2008 Carly made a best friend on the show, her co star, , who portrayed Carly's on screen rival, Brooke McQueen. "Leslie is just like a sister to me, since I have none, I love and care for her deeply".Fact|date=April 2008 She is currently starring in Power Up's new project .

Splitting her time between Los Angeles and Vancouver, Pope is currently attending university when her filming schedule allows. She speaks Italian, Spanish and French fluently and is seeking to expand her education in literature and languages.