The culture of Burkina Faso in West Africa is also called the Burkinabé culture.

Two key elements of culture in Burkina Faso (a country once known as Upper Volta) are its indigenous masks and dancing. The masks used in this region of the western Sahel are made for rites of sacrifice to gods and animal spirits in the villages. Native dance, on the other hand, is employed to demonstrate the villagers' desire for blessings by the spirits......

Literature in Burkina Faso is based on the oral tradition, which remains important.[1] In 1934, during French occupation, Dim-Dolobsom Ouedraogo published his Maximes, pensées et devinettes mossi (Maximes, Thoughts and Riddles of the Mossi), a record of the oral history of the Mossi people.[1] The oral tradition continued to have an influence on Burkinabé writers in the post-independence Burkina Faso of the 1960s, such as Nazi Boni and Roger Nikiema.[2] The 1960s saw a growth in the number of playwrights being published.[1] Since the 1970s, literature has developed in Burkina Faso with many more writers being published.[3] 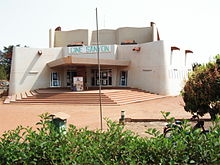 The Popular Theatre in Ouagadougou, the capital of Burkina Faso, is a center of social and cultural events for the country. Ouagadougou, is a major hub of activity for those involved in African cinema, and hosts a Pan-African film festival every year called FESPACO, the Pan-African film and television Festival of Ouagadougou, which is a world-renowned affair. Culture and art are further displayed at Laongo, an area of exposed granites where artists from the entire world are invited to sculpt on the rock. [5] Idrissa Ouedraogo, probably the most commercially successful African director, is from Burkina Faso.

While exact statistics on religion in Burkina Faso are not available and vary widely, the Government of Burkina Faso estimated in its most recent census (1996) that approximately 60 percent of the population practice Islam, and that the majority of this group belong to the Sunni branch, while remaining minorities adhere to the Shi'a branch, and significant numbers of Sunni Muslims identify with the Tijaniyah Sufi, or Salafi traditions.[6] The Government also estimated that 24 percent of the population maintains traditional indigenous beliefs, 17 percent practices Roman Catholicism, and 3 percent are members of various Protestant denominations.[6]