Devon Dikeou is an artist, the editor/publisher of zingmagazine, and a Contemporary Art collector (Dikeou Collection). As an artist, she has concentrated her artistic efforts in defining the spaces that act as interfaces between the artist, the context of viewing the art—gallery/museum/street/magazine—and the collector. Often her work implicates the viewer into a participatory role, by delineating viewing contexts and critiquing spaces, ways art works are typically exhibited, or meant to be seen, much less collected. The visual means she employs distinctly reiterate or re-enrich Conceptual models in their physical reality. Her titles are meant to further delve into these ideas by tapping into popular culture, creating another level of critique. This defining principle of the interchanging dynamics of artists, spaces, contexts, and collectors has informed the genesis of zingmagazine and the Dikeou Collection, both of which she founded as part of her artistic practice. She is represented by Rule Gallery, Denver. 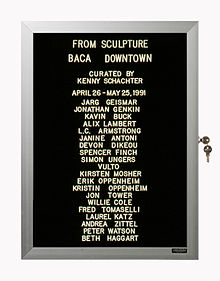 As an artist, Dikeou has taken part in over 130 gallery shows, 20 of which were solo. Among the highlights: her ongoing series, “What’s Love Got to Do with It,” [1][2] which was first shown in 1991 in an exhibition curated by Kenny Schachter.

"What's Love Got to Do with It": Installation View, 1991 ongoing

Mimicking the announcement boards in gallery lobbies of the 1980s—most prominently seen in the 420 West Broadway building in Soho when it was occupied by the pre-eminent dealer Leo Castelli—she made a sign for her first group exhibition listing the artists in the show, venue, curator, exhibition title, and dates. The series expanded to encompass every group exhibition she has participated in since, and was exhibited at Postmasters in 1998. More recently, a selection of 18 signs was shown at the Flag Art Foundation in 2009. Another important ongoing work, “From the Mixed Up Files of Mrs Basil E Frankweiler,” made its debut at Tricia Collins Grand Salon (1997). 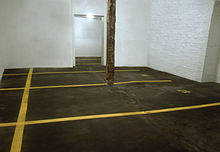 The same piece was selected and shown in the Art Basel 29 Statements Section (1998), and was also a finalist in the Mandarina Duck “Search for Art” competition (2000). Like “The Mixed Up Files...” many of Dikeou’s other installations examine the floor a gallery-goer walks on—she has made large floor installations by bringing asphalt into the gallery to make a parking lot, reclaiming cement imprints from Grauman’s Chinese Theater, and fashioning Victorian ceiling tin into an upside down carpet. Another work, “The Niney Chronicles,” details the fictional life of her childhood security blanket and was mentioned in The New Yorker’s “Talk of the Town” during its exhibition at the Williamsburg gallery Artmoving in 2008.

More recently Dikeou's installation "Reserved for Leo Castelli," a wall mural installation made from the image of a nameplate reserving a seat for aforementioned art dealer at Mezzogiorno Restaurant in Soho, premiered at the inaugural Independent art fair in 2010. Similarly, Dikeou made a partner wall mural installation of a nameplate for Ileana Sonnabend. "Reserved for Ileana Sonnabend" reserves a table for the angel of the famed art dealer. It premiered as a special artist’s project at NADA Miami Beach 2010. Dikeou was also chosen for a residency at Artpace in San Antonio, curated by Heather Pesanti. For her residency at Artpace, Dikeou again explored these issues of curatorial memory—exploring the realm of jazz and all its selective history. The artist exhibits 55 photographs of hotel rooms ostensibly reserved for 55 jazz giants. Noting that one jazz great was missing, Dikeou created a 56th name plate for friend and Alto 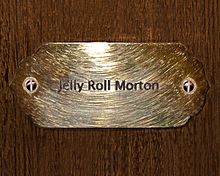 Sax/English Horn impresario Sonny Simmons. Along with 56 photographs—mounted on wood and installed salon style on wood paneled wall—the artist, Artpace, and Outcast Incorporated a produced a CD, “Sonny Simmons Performs the Music of Charlie Parker +”, the print run of which has been left in its shipping box and displayed as a giveaway in the exhibition area.

Among the tracks on the CD is a spoken-word piece in which Simmons—one of only five of the 56 still surviving musicians—comments on the 56 jazz legends displayed. Accompanying the sound piece is a wall mural of Simmons' imaginary name plate reserving a room or space in the virtual hotel of jazz superstars. Lastly, following Dikeou's tradition of collaboration, she curated two drawings by Chad Dawkins. The drawings are internet responses to searches for songs by Simmons. The entire installation is titled “Mamas Don’t Let Your Babies Grow Up to Be Cowboys”.

Her show at 179 Canal, "It's Deja Vu All Over Again" chronicled zingmagazine's 15 year history in a special edition of "What's Love Got to Do with It", listing all the curators of each issue. This exhibition was bookended by a show at Domy Bookstore in Austin, TX. Titled "You Can Observe a Lot by Watching", it traces the way communication is rendered through a series of sculptures, installations, and performance. 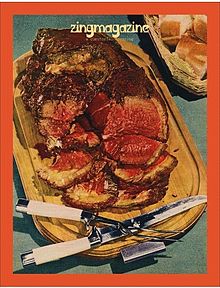 As part of Dikeou’s artistic practice—and, again, with her interest in the dynamics between artist, viewer, viewing context, and collector—she founded zingmagazine, where she is editor/publisher, as part of her artistic body of work. Currently in its 15th year, zingmagazine has published the work of over 700 contributors in its unique curatorial format: zing invites different artistic professionals to publish projects in a 2-16 page format in the magazine, or in unique and distinct publishing formats (e.g. independent books, music CDs, cassette tapes, posters, postcards, special fashion bags). To date, there have been 22 annual issues, and each compilation has between 180 and 400 pages. 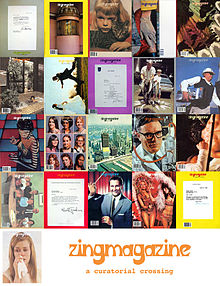 To purchase a digital issue 22 for iPad, Mac, or PC, download at Zinio. The issue also received a review on the blog Art Sponge [3]

While Dikeou is editor and publisher, none of her own artistic work has appeared in zingmagazine; rather, it is her curatorial vision that has guided the editorial choices and curatorial format. zingmagazine has enjoyed international distribution and critical success. Among its accolades, zing won the Council of Literary Magazines and Presses prestigious Fiction Award. zingmagazine has participated in over 65 International Art Fairs, including Art Basel, Art Basel Miami Beach, The Armory Show, and Art Forum Berlin, among others. One of its key presentation formats at these fairs was the zingmagazine Projection Drawing Series, in which several international artists participated.

zingmagazine is the author of a series of weekly newsletters that are sent to subscribers in seven cities: New York, Los Angeles, Chicago, Denver, Austin, London, and Berlin. The zingrecs newsletters let subscribers know all art happenings, openings, exhibitions and performances in each city. From zingrecs, zingmagazine developed a new app for the iPhone, iPad, and iPod Touch that includes all seven cities and publishes all past and current zingrecs, zingchat interviews, city guides, gallery listings, maps, and an artist's directory. It is free and available for download at iTunes—search "zingmagazine, OS 3.0+".

Aside from her curatorial work at zingmagazine, Dikeou has curated several independent exhibitions: “Between the Acts” C/O Oslo, Norway; "Ice Box" Athens, Greece, 1996; “The Good the Bad and the Ugly” MCA Denver, 2000; “Vik Muniz Remastered Photographs from the West Collection” (with Lee Stoetzel) at Museo de las Americas, Denver, 2007. She was a guest curator for RX Art Ball in NY in 2007. Dikeou is also an independent writer/critic, and she has published four international essays for artist’s catalogues, and Vogue Condé Nast Publications.

In 1998 Dikeou formed the Dikeou Collection with her brother, Pany Dikeou. As an extension of zingmagazine, the Collection aims to create a dialogue between the publication’s presentation of curated projects and the reality of art in installation, and again comes out in the artist’s own strategy of implicating and engendering the interfaces between the artist, the viewing context, viewer, and collector. Much of the work in the Dikeou Collection, no matter what medium, aims to reflect major force in each artist's oeuvre and reflect the very conditions that exist between artist, viewer, context, and collector. The Collection is free and open to the public in Downtown Denver and houses permanent installations of over 30 artists in a variety of mediums, from photography to drawing, video to painting, sculpture to installations.[4][5][6]

The Collection has several public programs, including a popular Contemporary Poetry and Written Word performance series. New this year, the Collection hosts a Life Drawing Group, which aims to examine the work of each artist in the Collection through a live model drawing session. Another program that the Collection initiated is a Reading Group Series, the first being the Warhol Reading Group, which gathered monthly for one year. In addition, the Dikeou Collection started an Artist’s/Collector’s/Writer’s Lecture Series. Lee Stoetzel presented two lectures from three different perspectives: his perspective as an artist, and the perspective of both a curator and collector for the West Collection, a contemporary art collection in Philadelphia. Paul Ramirez Jonas’s lecture, in turn, inspired a series of evenings of musicians playing music dedicated to the work of Ramirez Jonas. This inspired a monthly music series (begun in August 2010), taking place on the first Friday of each month, with local and touring musicians performing. Further, Amy Whitaker, author of Museum Legs, spoke about the problems facing museums as they vie for audiences. More lectures are planned. Upcoming programs include an arthouse film series and a yoga program, among others.

The Dikeou Collection has hosted many select groups from local Colorado Art Institutions including: the Denver Art Museum, the University of Colorado Museum of Art, Museo de las Americas, The Lab at Belmar, and the MCA Denver, as well as the popular and lively Soundpainting group, among others. The Collection is located in downtown Denver at 1615 California St, 5th Floor, phone: 303-623-3001, and is open to the public Wed-Fri 11am-5pm, and by appointment. Docent and cell phone tours are available.

Dikeou has been a Teaching Mentor at the School of Visual Arts in Fine Art Photography, participated in several Parsons’ Final Photography Reviews as well as a Final Review at Rocky Mountain College of Art & Design, and lectured at Brown University. She is currently a member of the Drawing Center’s new Drawing Room Board. She is a past member of the Advisory Board at MCA Denver, as well as part of their Architectural Search Committee, which resulted in their David Adjaye-designed museum. She received the Sue Cannon Award from the MCA for her artistic efforts in Denver. Dikeou was also on the advisory board of mixedgreens in NY. zingmagazine is a member of Literary Magazine Council of Presses (LCMP).

Dikeou attended Brown University, graduating with honors in 1986, where she was awarded the Albin Polasek Award for Fine Arts, and did her graduate work at the School of Visual Arts, MFA Program, graduating 1988. She worked for the ‘80s curatorial team Collins and Milazzo, and interned under John Post Lee at Tibor de Nagy Gallery. In High School she was an intern for Senator Gary Hart, where she worked the auto pen.