The decision of the Parliament of Scotland to ratify the Treaty of Union in 1707 was not unanimous and from that time, individuals and organizations have advocated the return of a Scottish Parliament. Some have argued for devolution - a Scottish Parliament within the United Kingdom - whereas others have advocated complete independence. The people of Scotland first got the opportunity to vote in a referendum on proposals for devolution in 1979 and though a majority of those voting voted 'Yes', the referendum legislation also required 40% of the electorate to vote 'Yes' for the plans to be enacted. A second referendum opportunity in 1997, this time on a strong proposal, resulted in an overwhelming 'Yes' victory, leading to the Scotland Act 1998 being passed and the Scottish Parliament being established in 1999. Since then, additional powers have been devolved, and the Calman Commission is considering whether additional powers should be transferred.

The Scottish Covenant Association was a non-partisan political organization that sought the establishment of a devolved Scottish Assembly. It was formed by John MacCormick who had left the Scottish National Party in 1942 when they decided to support all-out independence for Scotland rather than devolution as had been their position.

The Association was responsible for the creation of the Scottish Covenant, which gathered two million signatures in support of devolution. Members of the organization were also responsible the removal of the Stone of Destiny from Westminster Abbey in 1950 that attracted huge publicity for the cause of Scottish home rule.

The Scottish referendum of 1979 was a post-legislative referendum to decide whether there was sufficient support for the Scotland Act 1978 that was to create a deliberative assembly for Scotland. The Act required that for the Act not to be repealed at least 40% of the electorate would have to vote Yes in the referendum. The referendum resulted in a narrow Yes majority but fell short of the 40% requirement.

The Act devolves all powers except over matter it specifies as reserved matters.[7] It further designates a list of statutes which are not amenable to amendment or repeal by the Parliament[8] which includes the Human Rights Act 1998 and many provisions of the Scotland Act itself. Even when acting within its legislative competence, the Act further constrains the powers of the Parliament by inhibiting it from acting in a manner incompatible with the European Convention on Human Rights or European Community law.[9] The same constraints apply to acts of the Scottish Executive.[10] 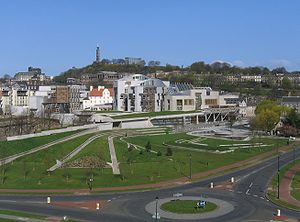 The new Scottish Parliament Building at Holyrood designed by the Catalan architect Enric Miralles and opened in October 2004.

Construction of the Scottish Parliament building began in June 1999 and the first debate in the new building was held on Tuesday, September 7, 2004. The formal opening by the Queen took place on October 9, 2004.[12] Enric Miralles, the Catalan architect who designed the building, died before its completion.[13]

From 1999 until the opening of the new building in 2004, committee rooms and the debating chamber of the Scottish Parliament were housed in the General Assembly Hall of the Church of Scotland located on The Mound in Edinburgh.[14] Office and administrative accommodation in support of the Parliament were provided in buildings leased from the City of Edinburgh Council.[14] The new Scottish Parliament Building brought together these different elements into one purpose built parliamentary complex, housing 129 MSPs and more than 1,000 staff and civil servants.[15]

The building aims to conceive a poetic union between the Scottish landscape, its people, its culture and the city of Edinburgh, an approach that won the parliament building numerous awards including the 2005 Stirling Prize, and it has been described as "a tour de force of arts and crafts and quality without parallel in the last 100 years of British architecture".[16][17]

As a result of provisions in the Railways Bill, powers were transferred from the Department of Transport to the Scottish Executive, a move described by then First Minister, Jack McConnell as "...the most significant devolution of new powers to Scottish ministers since 1999."[18]

Powers transferred over planning and nature conservation matters at sea (2008)

During 2008, agreement was reached to transfer responsibility for all planning and nature conservation matters at sea up to 200 miles from the Scottish coast to the Scottish Government. The change has implications for the offshore industry, wind and wave power and to a lesser extent, fishing, though responsibility for fishing quotas remains an European Union issue and oil and gas licensing and permitting remains a reserved matter.[27]

In August 2009 the SNP announced a Referendum Bill would be included in its package of bills to be debated before Parliament in 2009-10, with the intention of holding a referendum on the issues of Scottish independence in November 2010. The bill was not however expected to pass due the SNP's status as a minority administration, and due to the initial opposition to the Bill from all other major parties in the Scottish Parliament. [28][29]