The Devil appears frequently as a character in works of literature and popular culture. In Christian tradition the figure of the Devil or Satan, personifies evil. Today the Devil remains a common figure in popular culture.[1] 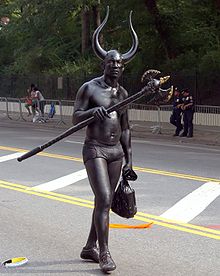 Generally when Satan is depicted in movies and television, he is represented as a red-skinned man with horns or pointed ears on his head, hooves or bird-legs, a forked tail or one with a stinger, and a pitchfork. When trying to blend in or deceive somebody, often he is represented as a plain human being, and, in some instances, only his voice is heard.

Including Satan as a personification of evil holds many narrative opportunities. Others have portrayed a human character's struggles with Satan to mark human foibles and failings in the attempt to live a good life — for example, Bedazzled (1967, remade 2000) and Oh, God! You Devil (1984). In Angel on My Shoulder (1946), the Devil uses the human desire for revenge to his own ends. And in the horror/suspense genre, including Satan provides for a gripping, virtually all-powerful foe, as seen in The Omen trilogy where his son Damien is the Antichrist. He can also be seen in someplaces throughout the movie "Tenacious D in The Pick of Destiny" (2006) resulting in a rock-off at the end with Jack and KG.

Sometimes in cartoons, when a character is unsure what (s)he should do, a devil and angel version of themself appears. Whereas the angel tries to get the person do the right thing, the devil tries to get them to do evil.

In the TV series Touched by an Angel, Satan occasionally appeared in the guise of a human being. In each instance, he would manipulate individuals around him in an attempt to thwart the efforts of God (as being carried out by the angels Monica, Tess and Andrew). He was depicted in five episodes of the series. John Schneider, Todd Rulapaugh and Mandy Patinkin each portrayed the character in one episode, while David Ogden Stiers appeared as Satan in the two-episode series finale.

In the TV series Stargate SG-1, the alien character Sokar, a Goa'uld, takes the persona of Satan, possessing a great army with which he wanted to take control over all other System Lords and subsequently the galaxy itself. He even creates his own Hell on Ne'tu, the satellite of his homeworld Delmak, where he sends his enemies for torture and punishment.

Star Trek: The Next Generation included a character pretending to be Satan in the episode "Devil's Due", including the traditional typical image and the Klingon version. Throughout the episode she appears as an attractive mischievous woman.

In the film, The Passion of the Christ, Satan is portrayed by a woman and has a decidedly more androgynous if somewhat wraith-like appearance than the traditional image of a red-skinned, horned satyr-like monster.

In the TV series Supernatural, Lucifer is stated to be the god of the demons in the third season episode "Sin City". Season four of the series deals with demons trying to release him, which they eventually succeed in doing. In the fifth season premiere, the risen Lucifer convinces a grief-stricken man to become his human vessel (as he is an angel, Lucifer must obtain permission before possessing someone). The relationship between Lucifer and Michael, a major focus of the fifth season, is portrayed as a tragic story of once close brothers becoming reluctant enemies. Although each is resolved to kill the other, the complexity of this relationship is apparent in the season 5 finale when the angel Castiel strikes Michael with 'holy fire', and in brotherly protectiveness Lucifer destroys Castiel, with the words "Nobody dicks with Michael, but me". It should be noted that, of all the depictions, in Supernatural, the Devil is shown less evil and more of a tragic villain going so far as stating himself that he cannot lie.

The TV series Reaper has Satan portrayed as a smooth-talking gentleman who has an often joking manner about his craft. He is played by Ray Wise.

The two-part Doctor Who story "The Impossible Planet"/"The Satan Pit" features a version of the Devil referred to simply as "the Beast", who claims to have served as a subconscious basis for devil-like deities in religions throughout the universe. This depiction gives more emphasis on the monstrous appearance of the Devil, depicting him as a gargantuan, red skinned beast with horns and a skeletal face.

The Torchwood episode "End of Days" features a gigantic demonic being named Abaddon, called the "Son of the Great Beast" (referring directly to the Doctor Who episodes stated above). Abaddon kills people by casting his shadow over them to absorb their life-energy, which is ultimately his downfall.

In the anime Demon Lord Dante (魔王ダンテ, Maō Dante), Demon Lord Satan helps Dante in his battle against God and his angels.

The third series of TV series Ashes to Ashes introduced the character Jim Keats (played by Daniel Mays), a Discipline and Complaints officer sent to audit the Fenchurch East police station. The bigger picture reveals Fenchurch East to be a purgatory for police officers, with Gene Hunt saving souls and sending them to Heaven, while Keats is shown to be the Devil, taking souls to Hell.

Satan has been featured as a character on many other series, including South Park, Family Guy, Futurama (though this incarnation is specifically the "Robot Devil", who runs Robot Hell the entrance to which is situated under a fairground ride called the Inferno in New Jersey, and is once referred to as Beelzebot), Cow and Chicken, The Simpsons, and Robot Chicken.

In an uncharacteristically-benign treatment, the Devil 'merely' uses his powers to defeat a sports team (the New York Yankees) that he apparently dislikes in the musical and film Damn Yankees.

Many writers have incorporated the character of Satan into their works. Among the works are, in chronological order:

SATAN, n. One of the Creator's lamentable mistakes, repented in sackcloth and ashes. Being instated as an archangel, Satan made himself multifariously objectionable and was finally expelled from Heaven. Halfway in his descent he paused, bent his head in thought a moment and at last went back. "There is one favor that I should like to ask," said he.
"Name it."
"Man, I understand, is about to be created. He will need laws."
"What, wretch! You, his appointed adversary, charged from the dawn of eternity with hatred of his soul — you ask for the right to make his laws?"
"Pardon; what I have to ask is that he be permitted to make them himself."
It was so ordered.

In 1971, Gerald Mayo brought a civil rights action in the United States District Court for the Western District of Pennsylvania against Satan and his servants who allegedly placed deliberate obstacles in Mayo's path. In this U.S. court's written opinion, the court did not deny the existence of Satan; rather, the court asserted that it was unlikely that Satan was ever present in the geographic area included in the Western District of Pennsylvania, stating, "We question whether plaintiff may obtain personal jurisdiction over the defendant in this judicial district." In what was clearly a jocular reference to The Devil and Daniel Webster, the court implied that Satan might live in New Hampshire, stating, "While the official reports disclose no case where this defendant has appeared as defendant there is an unofficial account of a trial in New Hampshire where this defendant filed an action of mortgage foreclosure as plaintiff." This appears to be the only published legal case in the United States regarding the existence of Satan and, at present, the United States' official position would seem to be that Satan may exist and, if so, Satan might be found in New Hampshire.