Devils Lake is a lake in the U.S. state of North Dakota. It is the largest natural body of water and the second-largest body of water in North Dakota after the artificially created Lake Sakakawea. In 2011, it reached an unofficial historical high elevation of 1454.20 feet. Additional rises above 1454.20 feet are still possible this spring and summer with rainfall and wave action. The lake can reach 1458.0 before naturally flowing into the Sheyenne River via the Tolna Coulee. The city of Devils Lake, North Dakota, takes its name from the lake.

Devils Lake is located in Ramsey County and Benson County in northeastern North Dakota. The Spirit Lake Tribe occupies most of the southern shore.

Under normal conditions, Devils Lake is shallow, saline, and hypereutrophic (very high in nutrients). During periods of excessive precipitation, however, the lake can be quite deep (up to 60 feet (18 m) in places), eutrophic (rich in minerals, nutrients, and organisms), with decreased salinity due to dilution.[1]

Because Devils Lake is endorheic, the lake tends to be much higher in salinity than are lakes with outlets to river systems. This is similar to the Great Salt Lake in Utah.[3] Lower water levels increase salinity threatening fish and wildlife.[3] Salinity levels in the lake have been one prominent aspect of the debate over diversion of lake water into the Sheyenne River, with questions of the potential environmental impact of the diverted water on downstream rivers, lakes, and communities.[4] 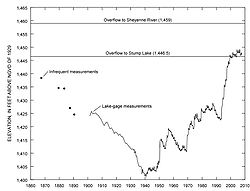 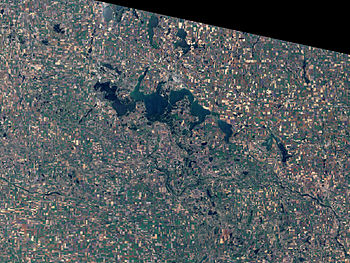 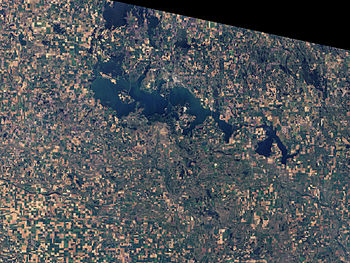 Devils Lake is well-known for its wide variations in lake levels, with large swings between low and high water levels. This owes in large part to its nature as a closed-basin lake, lacking a natural outlet. The release of water is dependent upon evaporation and seepage.[3]

The low, flat terrain around Devils Lake consists of various coulees, channels, and basins, which may be separated during times of low water, or connected during high water.[3] Thus the boundaries of the lake can vary greatly from year to year, depending on the amount of precipitation.

An increase in precipitation between 1993 and 1999 caused the lake to double in size, forcing the displacement of over 300 homes and flooding 70,000 acres (280 km2) of farmland.[6] Attempts to mitigate the flooding have reportedly cost North Dakota and the U.S. Government over $450 million. Efforts to control flooding include dike construction and moving railroad lines, roads, and power lines.[7]

In response to the flooding, the U.S. Congress directed the Army Corps of Engineers to research construction of an outlet in 1997 to control the lake level through methods other than evaporation or natural overflow.[4] The Corps' design included mechanisms for filtration and monitoring of the water, and was estimated to cost $186.5 million.[8]

North Dakota, objecting to the cost and certain water quality provisions of the plan, declined to participate in construction of the Corps' outlet.[4] In 2003, the state constructed its own outlet to divert water from Devils Lake into the Sheyenne River at a cost of $28 million.[6] The outlet was completed in 2005, but was not operated in 2006 due to water quality and biota issues.[4] The outlet operated at the maximum permitted rate for the first time in July 2009.[9]

The National Weather Service is the official government agency responsible for observing and predicting water levels at Devils Lake.[10]

Devils Lake has long been known for fishing and other watersports. It has been named the perch capital of the world. There are a number of boat ramps and other facilities around the lake to facilitate recreational activities on the lake. Recreation in the form of open water and ice fishing is estimated to have generated more than $20 million dollars annually. 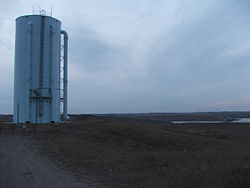 One of two large pumps used in the state constructed outlet.

During the most recent wet cycle which began in 1993, the lake rose over 26.5 ft (8.1 m), inundating 140 mi² (363 km²) of primarily agricultural land, necessitating the expenditure of over $400 million in flood protection measures[6] and leading some to call for an emergency outlet into the Sheyenne River.

A proposal from the Army Corps of Engineers would have drawn water from a different point of the lake, included filtration, and been able to discharge a maximum of 300 ft³/s (8 m³/s) of water from Devil's Lake, lessening the reliance of drainage on overflow or evaporation.[4] The Corps of Engineers estimated project costs to amount to $186.5 million, with the United States Congress designating $100 million to the project; North Dakota would have paid the remaining amount.[6]

The North Dakota government under Governor John Hoeven, objecting to water quality provisions and the amount of necessary funding,[4] instead constructed its own outlet, with approval of the North Dakota Department of Health and the U.S. State Department and Council For Environmental Quality. Though North Dakota's outlet, which cost $28 million, has a lower maximum discharge than the federal proposal (limited to a maximum of 100 ft³/s (2.8 m³/s) by the Section 402 NDPDES Permit) and includes a gravel filter for the removal of larger organisms, it has provided some relief to the flood problem.[12] Construction began in 2003 and was completed as of summer 2005.

The outlet drew opposition from the governments of Minnesota and Manitoba. They argue the outlet would create the potential for the transfer of unknown foreign aquatic species and high levels of sulfates into the Red River basin and Lake Winnipeg, the world's 10th-largest freshwater lake.[citation needed]

In March 2004, Manitoba, along with Minnesota and several environmental groups, sued the Department of Health in state court over the Devils Lake Outlet 402 NDPDES Permit. The court ruled the outlet could proceed in August 2004 and May 2005.[citation needed]

In addition, though the Boundary Waters Treaty of 1909 established an intermediary, the International Joint Commission (IJC), through which the United States and Canada can solve cross-boundary water disputes, the IJC has no power to act without invocation by both nations.[13] Canada attempted to invoke the IJC for purposes of conflict resolution, but the United States did not, effectively preventing the IJC from taking part in the controversy.[14]

The Canadian government argues it is a violation of the Boundary Waters Treaty of 1909 and Canada's national sovereignty. The U.S. government contends the diversion will not be harmful or violate the treaty under current conditions.

In November 2005, a joint United States and Canadian study concluded that none of the 13 species Canada classifies as invasive were present in Devils Lake. The study did find three species of fish parasites that are not currently known to exist in Lake Winnipeg. However, all three are ubiquitous to the waters of North America and have a wide variety of hosts. A difficulty inherent in determining what species are in Devils Lake versus Lake Winnipeg results from spatial relationships. Lake Winnipeg covers approximately 9,400 mi² (24,300 km²), dozens of times larger than Devils Lake. In addition, the Devils Lake Basin is significantly smaller than the watersheds feeding Lake Winnipeg, including the Saskatchewan River basin at approximately 56,000 mi² (145,000 km²). Drawing conclusions about the biological community already in Lake Winnipeg is difficult, due to the relative lack of biological sampling compared to Devils Lake.

Due to the rising waters of the Devils Lake and its basin, streams can flow in two directions: into the Red River Valley or the Devils Lake Basin. The Red River Valley basin contains a "rough fish", the common carp, which the North Dakota Game and Fish Department fears will enter Devils Lake basin waters in the near future, allowing the carp to populate Devils Lake. The carp's fast reproductive growth and the lack of carp predators in the lake will likely help it to dramatically increase in population. This could have drastic consequences for existing populations of game fish such as the walleye and northern pike, which could greatly harm the sport fishing industry.

Some preventive measures have been proposed, including inserting chemicals in the creeks along the boundary of the Devils Lake Basin and the Red River Valley to kill fish. Biologists did tests in 2005 which conclude that there are currently no carp in the Devils Lake Basin, but some have been found within two miles (3 km). The carp appear to have been stalled by the abundant cattail plants, which makes travel impossible for the fish.

In 2009, the BNSF Railway ended freight service between Devils Lake and Church's Ferry, a total of 19 miles (31 km), in favor of the KO Subdivision, due to the lake's rising waters. Amtrak's Empire Builder currently operates on this route, servicing Grand Forks, Devils Lake, and Rugby, ND. BNSF has offered Amtrak the right to operate over the KO subdivision, and even suggest Amtrak make a station stop at New Rockford, but Amtrak has stated that they will continue using the line. In the next few years, Amtrak will either have to rebuild the bridge that crosses the lake in Church's Ferry, or reroute.[15]

On June 15, 2011, it was announced that BNSF and Amtrak had reached an agreement to each cover one-third of the cost of rebuilding the rail line, with the government left to cover the remaining third.[16]