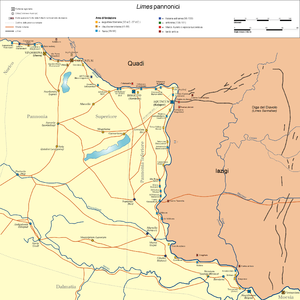 The Limes Sarmatiae or "Devil's Dyke" in eastern Pannonian plain, a group of lines of Roman fortifications done by Constantine I

The Devil's Dykes (Hungarian: Ördögárok) , also known as the Csörsz árka ("Csörsz Ditch") or the Limes Sarmatiae (Latin for "Sarmatian border"), are several lines of Roman fortifications built mostly during the reign of Constantine I (312-337), stretching between today's Hungary, Romania and Serbia.

The fortifications consisted of a series of defensive earthen ramparts-and-ditches surrounding the plain of the Tisia (Tisza) river. They stretched from Aquincum (within modern Budapest) eastwards along the line of the northern Carpathian mountains to the vicinity of Debrecen, and then southwards to Viminacium (near modern Stari Kostolac).[1]

They were probably designed to protect the Iazyges, a Sarmatian tribe that inhabited the Tisza plain and had been reduced to tributary status by Constantine, from incursions by the surrounding Goths and Gepids.[2]

Some elements of the fortifications, however, date from the 2nd century AD, and probably constituted an earlier defensive line constructed under emperor Marcus Aurelius (ruled 161-80) at the time of the Marcomannic Wars, the previous occasion that the Tisza plain was occupied by the Romans.

The "Limes Sarmatiae" was intended to expand the Roman Limes, and was built at the same time as the Constantine Wall in Wallachia (connected to the Limes Moesiae). It was, however, destroyed after a few years, at the end of the I5th century.

Indeed, in 374 AD, the Quadi, a Germanic tribe in what is now Moravia and Slovakia, resenting the erection of Roman forts of the "Limes Sarmatiae" to the north and east of the Danube in what they considered to be their own territory, and further exasperated by the treacherous murder of their king, Gabinius, crossed the river and laid waste the province of Pannonia.

The emperor Valentinian I in 375 Ad entered Pannonia with a powerful army and reinforced the fortifications of the "Limes Sarmatiae". But during an audience to an embassy from the Quadi (who were quickly defeated by the Roman legions) at Brigetio on the Danube (in Slovakia), Valentinian I suffered a burst blood vessel in the skull while angrily yelling at the people gathered. This injury resulted in his death on November of that year.

Soon after his death, and following a lack of ruling power inside the Roman Empire, the "Limes Sarmatiae" was destroyed.