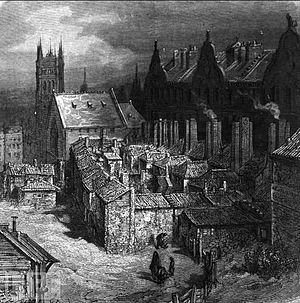 The Devil's Acre with the Palace of Westminster in the background, in an 1872 illustration by Gustave Doré. The illustration shows the Devil's Acre some years into the slum clearance, with the courtyard of small low-lying houses surrounded by multi-occupancy houses fronting onto Old Pye Street.[1]

In the 19th century it was considered one of the worst areas of London and in 1850 Charles Dickens called the area The Devil's Acre in Household Words. In the same year the term slum was popularised by Cardinal Wiseman when his description of the area was widely quoted in the national press.

Westminster has its origins in medieval times. The monks of the Westminster Abbey would offer safe haven to suspected criminals and debtors, leading to the area next to the western gate of the Abbey being called "the Sanctuary". The Sanctuary acquired a reputation for narrow streets and run-down dwellings, as did other parts of Westminster in the 18th century.

The area around Old Pye Street, Great St Anne's Lane (now St Ann Street) and Duck Lane (now St Matthew Street) was considered the worst. Prior to the 18th century the area was considered a desirable place to live, but in the middle of the 18th century gardens and courtyards were built over and the streets became "notoriously ill-paved and ill-maintained". Dwellings were built with the cheapest material, lacked ventilation, had poor lighting, and no drainage or sanitation facilities.[3]

The area was low lying, close to the river Thames and built along the relict channels of the river Tyburn. This made the area prone to waterlogging, and dwellings started to subside. By the 19th century the area was considered one of the worst in London and thought of as the centre of poverty, vice and crime. In 1850 Charles Dickens called the area The Devil's Acre in Household Words.[4] In the same year Cardinal Wiseman described the area as follows:

Close under the Abbey of Westminster there lie concealed labyrinths of lanes and courts, and alleys and slums, nests of ignorance, vice, depravity, and crime, as well as of squalor, wretchedness, and disease; whose atmosphere is typhus, whose ventilation is cholera; in which swarms of huge and almost countless population, nominally at least, Catholic; haunts of filth, which no sewage committee can reach – dark corners, which no lighting board can brighten.[3]

This passage, first published by Wiseman in An Appeal to the Reason and Good Feeling of the English People on the Subject of the Catholic Hierarchy, was widely quoted in the national press,[5] which led to the popularisation of the word slum to describe bad housing.[6][7]

Population density in the Devil's Acre was not measured in terms of persons per acre, but persons per room.[1] The area had a high rate of mortality from diseases such as typhoid and in 1848 Great Peter Street, Perkin's Rent, Duck Lane and Old Pye Street were the most densely populated streets in the district. The streets were mostly made up of old, irregular and run-down houses. Great Peter Street was mainly occupied by tradesmen, small shopkeepers, labourers, mechanics, and those with irregular or uncertain earnings. In Perkin's Rent, Duck Lane and Old Pye Street 10 to 12 people frequently lived in one room and the houses were mostly occupied by what a contemporary described as "mendicants, hawkers, costermongers, lodging house keepers, thieves and abandoned females of irregular and intemperate habits".[8]

Old Pye Street was lined with lodging houses and parts of Old Pye Street became known as "Irish rookery". A 1851 census of the common lodging houses on Old Pye Street, which was the centre of the Devil's Acre, describes the occupation of 20 lodgers in one house as: five "beggars", two "beggar bricklayers", one "labourer beggar", one "needlewoman beggar", one "hawker", one "labourer bricklayer" and one "errand boy". Initially the birthplace of 15 of the 20 was noted as unknown and they were later identified as Irish.[9]

Enter a narrow street called St. Anne's Lane, glance up at a fearful side-court called St. Anne's Place, and wonder whether such filth and squalor can ever be exceeded. I went up the last-mentioned court, which had every feature of a sewer, and found a long puddle of sewage soaking in the hollow centre. The passages of the low black huts on either side were like old sooty chimneys, and the inhabitants were buried out of sight in the gloom.[10]

Hollingshead went on to describe Pye Street in the Devil's Acre:

I crossed over the road, and entered the openly acknowledged high street of thieves and prostitutes. It is called Pye Street, and has no mock modesty about it—no desire to conceal its real character. Threepenny "homes for travellers" abound on both sides-yellow, sickly, unwholesome places, many of them far below the level of the road, and entered by a kind of pit. Many of the houses have no flooring on their passages; and there is nothing for the barefooted children to stand upon but the black, damp, uneven earth. A child, dirty and nearly naked, was hanging out of one of the old-fashioned casement windows; and in the summer time it is no unusual thing to see about fifty coarse women exhibiting themselves in the same manner. The yards at the back of the houses contain little mountains of ashes and vegetable refuse; and a dust contractor's yard, in the centre of the street, seems to have burst its bounds, and to have nearly poured out its oyster-shells, cabbage-stalks, and broken china into the open thoroughfare. Shorthaired young men, with showy handkerchiefs round their neck, and tight corduroy trousers, were standing at most of the doors, looking pretty sharply about them from under the peaks of their caps. A fiddler was playing a dancing tune to a mixed assembly of thieves and prostitutes, and a morning ball was being arranged on both sides of the pavement. Many of the side streets and courts about here are shored up with black beams to keep the houses from falling, which adds to their wretched appearance.[10]

I think it would have been difficult to have found a spot more full of crime ... The whole street drank hard while such plunder lasted ... an instance of the low life under the shadows of the Abbey. I received a message one day to administer Holy Communion to a dying girl in Pye Street. She was in the last stages of consumption, and her story was to the effect that her husband lived on her wages, which he forced her to obtain by a life of sin ... She summed up her repentance in one sentence: "I have worked very hard, and I am very tired."[11] 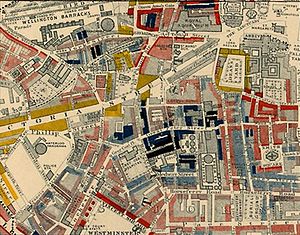 As with a number of streets at the time, the building of Victoria Street was aimed at removing the slums in the area, and particularly the Devil's Acre. The street was formally opened in 1851 and, as with other such projects, it displaced rather than removed the slum. Along Victoria Street a mix of office blocks, shops and upper-class apartment buildings, also known as French Flats, were built.[12]

The street had been planned as an experiment in sanitary and moral engineering. In deciding the route of the street, the planner James Pennethorne's objective "has only been to ascertain how best to improve the condition of the inhabitants of Westminster by improving the buildings, the levels, and the sewers, and by opening communications through the most crowded parts." The street was several feet above the low-lying, badly drained marshland between Westminster and Belgravia, in medieval times known as Thorney Island. In 1850 considerable parts of Westminster were under the high-water mark of the Thames, and Victoria Street was designed to drain the area and clear the slums. Such developments were termed "town swamps and social bridges" by George Godwin. Pennethorne designed the street with a slight angle so that it would route through the Devil's Acre. The slum inhabitants were displaced by the Victoria Street developments, as the quantity of low-rent houses in the area declined and they were unable to afford the rents of the newly constructed flats. John Hollingshead reported at the time that Victoria Street had divided "the diseased heart" in half, pushing inhabitants into the surrounding areas. The Bishop of London informed the House of Lords that Victoria Street had displaced 5,000 people, 75 per cent of whom moved into already overcrowded areas south of the Thames, with the remaining people staying in declining low-rent accommodation in Westminster. New blocks of flats were constructed along Victoria Street and, according to Hollingshead, "While the nighmare street of unlet places was waiting for more capital to fill its yawning gulf, and a few more residents to warm its hollow chambers into life, the landlords of the slums were raising their rents: and thieves, prostitutes, labourers, and working women were packing in a smaller compas."[13]

From the 1850s onwards the area around Westminster, including the Devil's Acre, became the focus of a new movement of social housing, largely funded by George Peabody and the Peabody Trust. This movement had a lasting impact on the urban character of Westminster and many of the philanthropically funded social housing estates have survived into the 21st century.[14]

Slum clearance began with the Rochester Buildings, on the corner of Old Pye Street and Perkin's Rent, which were built in 1862 by the merchant William Gibbs. They are one of the earliest large-scale philanthropic housing developments in London. The Rochester Buildings were sold to the Peabody Trust in 1877 and later become known as Blocks A to D of the Old Perkin's Rents Estate. Angela Burdett-Coutts, 1st Baroness Burdett-Coutts funded a experimental social housing estate, among the first of its kind, on the corner of Columbia Road and Old Pye Street (now demolished).[14] In 1869 the Peabody Trust built one of its first housing estates at Brewer's Green, between Victoria Street and St. James's Park. What remained of the Devil's Acre on the other side of Victoria Street was cleared and further Peabody estates were built after the Cross Act of 1875.[12]

In 1882, the Peabody Trust built the Abbey Orchard Estate on the corner of Old Pye Street and Abbey Orchard Street. The estate was designed by Henry Darbishire and built on former marshland. The buildings rest on arches, supported by a foundation of piles. Like many of the social housing estates, the Abbey Orchard Estate was built following the square plan concept. Blocks of flats were built around a courtyard, creating a semi-private space within the estate functioning as recreation area. The courtyards were meant to create a community atmosphere and the blocks of flats were designed to allow sunlight into the courtyards. The blocks of flats were built using high-quality brickwork and included architectural features such as lettering, glazing, fixtures and fittings. The estates built in the area at the time were considered model dwellings and included shared laundry and sanitary facilities, innovative at the time, and fireplaces in some bedrooms. The design was subsequently repeated in numerous other housing estates in London.[14]