Development of Windows 7 began when Windows Vista was released. Milestone 1, Milestone 2, and Milestone 3 were sent to Microsoft's partners in 2008. In October 2008, Microsoft gave build 6801 to PDC attendees and a public beta was released in January 2009.

The release candidate was available from April 30, 2009 for MSDN and Technet subscribers, and was released to the public on May 5, 2009. The final build of Windows 7 was released to manufacturing on July 22, 2009;[1] Technet and MSDN subscribers were able to download it on August 6. On October 22, the operating system was made generally available for public purchase.

In 2000, Microsoft was planning to follow up Windows XP, and its server counterpart, Windows Server 2003 (both codenamed Whistler), with a major new release of Windows, codenamed Blackcomb (both codenames refer to the Whistler-Blackcomb resort). This new version was, at that time, scheduled for a 2005 release.[2][3]

Major features were planned for Blackcomb, including an emphasis on searching and querying data, and an advanced storage system named WinFS to enable such scenarios. In this context, a feature mentioned by Microsoft co-founder Bill Gates for Blackcomb was "a pervasive typing line that will recognize the sentence that [the user is] typing in."[4]

Later, Blackcomb was delayed, and an interim, minor release, codenamed "Longhorn" (named for the Longhorn Tavern between the resorts), was announced for a 2003 release.[5] By the middle of 2003, however, Longhorn had acquired some of the features originally intended for Blackcomb, including WinFS, the Desktop Window Manager, and new versions of system components built on the .NET Framework. After the 2003 "Summer of Worms", where three major viruses − Blaster, Sobig, and Welchia − exploited flaws in Windows operating systems within a short time period, Microsoft changed its development priorities, putting some of Longhorn's major development work on hold in order to develop new service packs for Windows XP and Windows Server 2003. Development of Longhorn was also "reset" in September 2004.

As major feature work on Windows Vista wound down in early 2006, Blackcomb was renamed Vienna.[6] However, following the release of Windows Vista, it was confirmed by Microsoft on July 20, 2007 that "the internal name for the next version of the Windows Client OS"[7] was Windows 7, a name that had been reported by some sources months before.[6] On October 13, 2008, it was announced that Windows 7 would also be the official name of the operating system.[8][9] Mike Nash, Microsoft's vice-president of Windows product management said:

The decision to use the name Windows 7 is about simplicity. Simply put, this is the seventh release of Windows, so therefore Windows 7 just makes sense. Coming up with an all-new 'aspirational' name does not do justice to what we are trying to achieve, which is to stay firmly rooted in our aspirations for Windows Vista, while evolving and refining the substantial investments in platform technology in Windows Vista into the next generation of Windows.[9][10]

The very first release of Windows was Windows 1.0, the second was Windows 2.0, the third Windows 3.0. Here's where things get a little more complicated. Following Windows 3.0 was Windows NT which was code versioned as Windows 3.1. Then came Windows 95, which was code versioned as Windows 4.0. Then, Windows 98, 98 SE and Windows Millennium each shipped as 4.0.1998, 4.10.2222, and 4.90.3000, respectively. So we're counting all 9x versions as being 4.0. Windows 2000 code was 5.0 and then we shipped Windows XP as 5.1, even though it was a major release we didn't want to change code version numbers to maximize application compatibility. That brings us to Windows Vista, which is 6.0. So we see Windows 7 as our next logical significant release and 7th in the family of Windows releases...There's been some fodder about whether using 6.1 in the code is an indicator of the relevance of Windows 7. It is not. Windows 7 is a significant and evolutionary advancement of the client operating system. It is in every way a major effort in design, engineering and innovation. The only thing to read into the code versioning is that we are absolutely committed to making sure application compatibility is optimized for our customers.[12]

Microsoft's Ben Fathi stated on 9 February 2007 that the focus of the operating system was still being worked out, and he could only hint at some possibilities:[13]

We're going to look at a fundamental piece of enabling technology. Maybe it's hypervisors. I don't know what it is [...] Maybe it's a new user interface paradigm for consumers.
—Ben Fathi, Windows Core Operating System Division Vice President

Bill Gates, in an interview with Newsweek, suggested that the next version of Windows would "be more user-centric."[14] When asked to clarify what he meant, Gates said:

That means that right now when you move from one PC to another, you've got to install apps on each one, do upgrades on each one. Moving information between them is very painful. We can use Live Services to know what you're interested in. So even if you drop by a [public] kiosk or somebody else's PC, we can bring down your home page, your files, your fonts, your favorites and those things. So that's kind of the user-centric thing that Live Services can enable. [Also,] in Vista, things got a lot better with [digital] ink and speech, but by the next release there will be a much bigger bet. Students won't need textbooks; they can just use these tablet devices. Parallel computing is pretty important for the next release. We'll make it so that a lot of the high-level graphics will be just built into the operating system. So we've got a pretty good outline.

We're hard at work, I would say, on the next version, which we call Windows 7. I'm very excited about the work being done there. The ability to be lower power, take less memory, be more efficient, and have lots more connections up to the mobile phone, so those scenarios connect up well to make it a great platform for the best gaming that can be done, to connect up to the thing being done out on the Internet, so that, for example, if you have two personal computers, that your files automatically are synchronized between them, and so you don't have a lot of work to move that data back and forth.

Senior Vice President Bill Veghte stated that Windows 7 will not have the kind of compatibility issues with Vista that Vista has with previous versions:[16]

Our next release of Windows will be compatible with Vista. The key is let's get on with it. We'll be ready when you want to deploy Windows 7.[17]

Ballmer also confirmed the relationship between Vista and Windows 7, indicating that Windows 7 will be an improved version of Vista.[17]

Windows 7 Milestone 1 Build 6519 is still very similar to Windows Vista, with only a few changes. For example, Windows Sidebar has been replaced with standalone gadgets. The first known build of Windows 7 was identified as a "Milestone 1 (M1) code drop" according to TG Daily with a version number of 6.1.6519.1. It was sent to key Microsoft partners by January 2008 in both x86 and x86-64 versions.[18][19] Build 6519 was the first build to have textures of a different taskbar, although nobody knew until recently how to enable the new taskbar.[20] Though not yet commented on by Microsoft, reviews and screenshots have been published by various sources.[21][22] The M1 code drop installation comes as either a standalone install or one which requires Windows Vista with Service Pack 1, and creates a dual-boot system.[23] It had the ability to visually pin and unpin items from the Start Menu.

On 20 April 2008, screenshots and videos of a second build of M1 were leaked with a version number of 6.1.6574.1. This build included changes to Windows Explorer as well as a new Windows Health Center.[24]

According to the TG Daily article of 16 January 2008, the Milestone 2 (M2) code drop was at that time scheduled for April or May 2008.[18] A Milestone 2 build was demonstrated at the D6 conference[25] with a build number of 6.1.6589.1.winmain_win7m2.080420-1634. The build had a different taskbar than found in Windows Vista, with, among other features, sections divided into different colors. The host declined to comment on it, stating "I'm not supposed to talk about it now today".[26] The taskbar in Milestone 2 showed the total number of combined windows like Windows XP and Windows Vista, a feature which was removed in the final version of Windows 7.[27]

According to Paul Thurrott, Milestone 3 (build 6780) was shipped to Microsoft employees and close partners in the week of 7 September 2008. Described as visually and functionally similar to Windows Vista by Mary Jo Foley of ZDNet[28] and Stephen Chapman of UX Evangelist,[29] some bundled applications in Milestone 3 now use a ribbon interface similar to that of Office 2007.[30]

Many applications that had been integrated into previous versions of Windows have been removed, including Calendar, Contacts, Mail, Meeting Space, Movie Maker, and Photo Gallery and are available as downloads in the Windows Live Wave 3 beta release.[31] WinFuture.de later leaked 192 images of Windows 7 build 6780.[32] Windows 7 build 6780 Enterprise Edition has since been leaked to the public.

The Windows 7 Beta was released on January 7, 2009 to TechNet and MSDN subscribers.[45] On January 10, after a short delay due to overwhelming demand, both 32 and 64-bit versions of the Beta were made available to the public until the 10th of February. The build number is 7000.winmain_win7beta.081212-1400.[46] Existing installations of the beta continued to operate until August 1, 2009 with bi-hourly shutdowns beginning July 1.

On February 8, 2009, build 7022 x86 of Windows 7 was leaked to file sharing sites on the Internet by a Microsoft Ukraine employee.[47] On March 1, 2009, build 7022 x64 was leaked. Reviewers have noted that Internet Explorer 8 had been updated to RC1, a few new icons, new animation effects for Windows Desktop Gadgets with new icons and changes to Paint and a faster setup process. The build was completed on January 15, 2009.[48]

A 64-bit build 7048 was leaked on March 2, 2009[49] and the 32-bit build 7048 was leaked on March 6. One notable change of this build was that users now had the ability to turn off functionality of various Windows features, like Internet Explorer, Windows Search, and Windows Media Player via the Control Panel. Ars Technica did a roundup of some of the visual UI changes between build 7000 and 7048 [50] and ZDNet managed to do some performance tests showing build 7048 was superior to build 7000.[51]

On February 26, 2009, Microsoft announced 36 major user-visible changes to Windows 7 since the Beta.[52] On March 6, 2009, Microsoft announced that users would have the ability to turn off even more features than in Windows Vista. Some programs users would be able to turn off included Windows Media Player, Windows Media Center, Internet Explorer 8, Windows Search, and the Windows Gadget Platform.[53]

The Windows Team Blog announced on April 24, 2009 that the Release Candidate would be available to MSDN and TechNet subscribers on April 30 and to the public on May 5. The release candidate was also reportedly given to OEM partners and TAP gold testers.

On May 26, an update with 31 languages was available to download through Windows Update.

In a recent blog post, however, Genuine Windows director Alex Kochis stated that the product key is indeed valid but will only activate PCs from the original manufacturer it has been given to.[66] Kochis went on to say that anti-piracy technologies built into the operating system would detect copies activated with the leaked OEM certificate and product key as non-genuine and would notify the customer that they are running a possibly counterfeit copy of Windows.

It has already been proven however, that the product key and certificate are able to activate Windows 7 build 7600 on many different PC brands.[67] It is not clear however, if copies of Windows installed this way will pass Microsoft's Genuine Advantage check if the product key is blacklisted. If so, OEMs will be forced to recollect PCs manufactured, installed and activated with the key and install different keys. 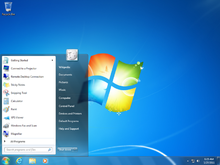 Since August 16, 2009, Windows 7 is available to Microsoft Certified and Gold Certified Partners, followed by Microsoft Action Pack subscribers on August 23. Microsoft has also announced that companies which have a contract with Software Assurance may acquire Windows 7 when it became available for volume licensing on September 1, 2009. Windows 7 was released to consumers on October 22, 2009.

Language Packs for Windows 7 RTM are available via Windows Update since August 25, 2009.[70]