The Imperial Japanese Army (IJA) initially purchased foreign tanks for evaluation during World War I, and began developing its own indigenous designs during the late 1920s. 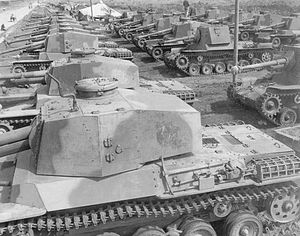 Near the end of World War I, the IJA showed an interest in armored warfare and tanks and obtained a variety of models from foreign sources. These models included one British Heavy Mk IV and six Medium Mark A Whippets, along with thirteen French Renault FT-17s (later designated Ko-Gata Sensha or "Type A Tank"). The Mk IV was purchased in October 1918 while the Whippets and Renaults were acquired in 1919.[1]

Trials with these vehicles were successful, and the IJA decided to establish an armored force in 1925, planning to form three light tank battalions and one heavy tank battalion. However, the greatest problem was equipping these units, as the Japanese did not have any indigenous tank production capability. The IJA therefore sent a mission to purchase more tanks from the United Kingdom and France, requesting newer designs. However, the newer tanks were not available as these countries had difficulties supplying them to their own armored forces, and the only available model was the older Renault FT-17. The IJA reluctantly imported these, but in 1929 they were able to acquire ten examples of its successor, the Renault NC1 (designated Otsu-Gata Sensha or "Type B Tank"). Both types of tanks were still in active Japanese service in 1940, and additional vehicles and spare parts were obtained after the Japanese occupation of French Indochina.

The IJA also purchased several Vickers 6-Ton tanks and Carden Loyd tankettes and used these as a basis for further development, resulting in tanks such as the Type 89 Chi-Ro.

As with the Americans and the Italians, the Japanese originally adopted French-designed tanks, and were influenced by their doctrine designs and employment. As with many other nations, the Japanese viewed the tank as a tool largely used in direct support of their infantry, and were rarely allowed independent action. During the Second Sino-Japanese War, Japanese tanks were successful, especially as the Chinese had no large and significant tank forces of their own. 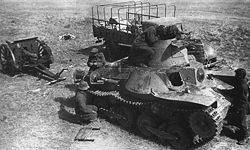 With their defeat by the Soviet Union at Nomonhan in 1939, the Japanese began to rethink their tank designs and doctrine, although their emphasis would continue to remain on supporting the infantry. However, with the beginning of the Pacific War, Japan's priorities shifted to warship and aircraft production, and resources for the production of armored vehicles for the Army were diverted or curtailed.[2]

In addition, the terrain of Southeast Asia was somewhat restrictive, and the islands of the Pacific were in general not suited to armored warfare, being largely tropical rainforests and obviously restrictive in maneuver areas. Aside from the invasion of Malaya, and the Philippines, most IJA armor supported defensive positions, or supported the infantry in general operations.

Japanese tank designs which could challenge Allied tanks did not appear until the close of World War II; these were experimental or produced in small quantities, and ultimately, not enough to affect the course of the war.

For both security and logistical reasons, many engineers in the Japanese Army Technical Bureau during the early 1920s were adamant that future tanks should be made in Japan. General Suzuki (chief of the Technical Bureau) protested the Ministry of War decision to purchase foreign designs, which ultimately led to that decision being reversed.

However, indigenous design and production of armored vehicles would prove to be difficult, due to minimal experience with military motor vehicle design (the engineers had only designed several types of trucks and one type of tractor), along with low priority for tank steel production. Moreover, the first design had to be completed in only two years or the program would be canceled.

Development of the first Japanese-designed tank began in June 1925. A team of four engineers in the motorcar group of the Technical Bureau participated in the development, including a young army officer, Major Tomio Hara. Major Hara later became the head of the tank development department and would rise to the rank of General. The team started their design of a tank and worked hard to complete the project within the two years allocated. As this was the first tank designed in Japan, they had to begin with almost every component built from scratch.

Hara designed a bell crank scissors suspension which paired the bogie wheels and connected them to a coil spring mounted horizontally outside the hull. This suspension became standard on the majority of Japanese tanks and can be seen on the Type 89 medium tank.

The design was completed in May 1926 and production was ordered to begin at the Osaka Army Arsenal. At the time, there was little heavy industry allocated to the production of motor vehicles in Japan, so there were significant difficulties creating the prototype. The prototype was completed in February 1927, within the required period. Many IJA generals attended the trials on June 21–22, 1927, and the tank showed acceptable performance during movement in rough terrain and on slopes.

Along with the Osaka Army Arsenal, Sagami Army Arsenal was also assigned to oversee the design and manufacture of assorted types of armored vehicles and tanks.

The IJA decided that the Type 87 was too heavy at 18 tons and too slow to be used as its main tank, and the Type 89 Chi-Ro was developed to overcome these shortcomings. The new design weighed 12.8 tons and used stronger and lighter steel plate instead of the Type 87's iron armor. Armament was a Type 90 57 mm gun, along with one (later two) Type 91 6.5 mm machine guns. The Type 89 design was completed in April 1929, with production starting in 1931, making this the first tank to be mass-produced in Japan. The Type 89 had two variants - the Kō ("A") version, which used a water-cooled gasoline engine, and the Otsu ("B") version, with an air-cooled diesel engine and improved frontal armor. The Type 89 first saw combat in China, but was in the process of being replaced by the Type 97 Chi-Ha at the start of World War II.

The Type 95 Ha-Go was a replacement for the Type 89 medium tank which was considered too slow for mechanized warfare. The prototypes were built by Mitsubishi and production was started in 1935, with over 2000 completed by the end of the war. It was armed with a 37 mm main gun and two 7.7 mm (0.303 inch) machine guns, one in the turret rear and the other hull-mounted. The Type 95 weighed 7.4 tons and had three crewmen. It served during the Battle of Khalkhin Gol (Nomonhan) against the Soviet Union in 1939,[3] against the British Army in Burma and India,[4] and throughout the Pacific Theater during World War II. On 22 December 1941 the Type 95 light tank earned the distinction of being the first enemy tank to engage in tank vs tank combat with US manned American tanks (M3 Stuart light tanks) during World War II; and the only enemy tanks to have ever landed on North American soil during any war.[4][5] Several variants were built, among them the Type 3 Ke-Ri, which mounted a 57 mm Model 97 gun, the Ta-Se, an anti-aircraft tank which mounted a 20mm AA gun, and the Type 5 Ho-Ru, a casemate-hulled turretless self-propelled gun similar to the German Hetzer, but with a 47 mm gun. 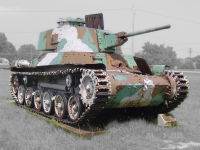 Some 3,000 examples of the Type 97 Chi-Ha were produced by Mitsubishi, including several types of specialized tanks. Initial versions were armed with a low-velocity 57 mm gun, but from 1942 onwards, the Model 97 was armed with a high-velocity 47 mm cannon, mounted in a larger turret taken from the Type 1 Chi-He medium tank (see below). This version was designated Shinhoto Chi-Ha ("new turret") and is considered by many to be one of the best Japanese tank designs of the war.

The Type 1 Chi-He was developed in 1942 to replace the Type 97. The newer tank proved to be superior to the Type 97 in both speed and armor protection, but due to the rapid pace of events, the Japanese Army had shown little interest in this new tank. The turret and 47 mm gun of the Type 1 could be mounted on the hull of the Type 97 (creating the Shinhoto Chi-Ha version) and the factories were already mass-producing the older tank. Production of the Chi-He started in 1944, but was discontinued after less than one year in favor of the Type 3 Chi-Nu medium tank. 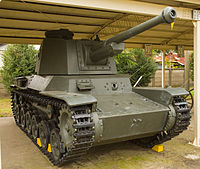 The Type 3 Chi-Nu medium tank was urgently developed to counter the American M4 Sherman medium tank. Originally, the next tank in development to replace the Chi-He was the Type 4 Chi-To medium tank. However, the development of the Chi-To and the Type 5 Chi-Ri heavy tank was delayed, again due to a steel shortage, and a stopgap tank was required. The development of Chi-Nu started in May 1944 and was completed in October of that year. The Chi-Nu was the last tank deployed by the IJA, and production continued until the end of the war.

The Type 4 medium tank Chi-To (四式中戦車 チト, Yonshiki chūsensha Chi-To?) was one of several new medium and heavy tanks developed by the Imperial Japanese Army towards the end of World War II. The Type 4 Chi-To was by far the most advanced Japanese wartime tank to reach the production phase.[6]

The Type 5 medium tank Chi-Ri (五式中戦車, Go-shiki chusensha Chi-ri?) was the last medium tank developed by the Imperial Japanese Army in World War II. Intended to be a heavier, more powerful version of Japan's sophisticated Type 4 Chi-To medium tank, in performance it was designed to surpass the US M-4 Sherman medium tanks being fielded by the Allied forces. As with many innovative weapons projects launched by Japan in the final days of World War II, production could not advance beyond the prototype stage due to material shortages, and the loss of Japan's industrial infrastructure to the allied bombing of Japan.

The O-I experimental superheavy tank had three turrets and weighed 120 tons, and required a crew of 11 men. It was 10 meters long by 4.2 meters wide with an overall height of 4 meters. The armor was 200 mm at its maximum, and the tank had a top speed of 25 km/h. This version had two gasoline engines, and was armed with 1 x 105 mm cannon, 1 x Type 1 37 mm (in a forward-mounted sub-turret), and 3 x Type 97 7.7 mm machine guns (one mounted in a forward sub-turret) while an ultraheavy version also mounted a Type 1 37 mm in a rear-facing sub-turret. It has been reported the one copy of the O-I was manufactured before the end of the war and was shipped to Manchuria, according to an engineer concerned with the project.[7] No images of the O-I have been found, only some drawings are known to exist.

Japan produced several amphibious tank designs, including the Type 1 Mi-Sha, Type 2 Ka-Mi, Type 3 Ka-Chi, Type 4 Ka-Tsu, Type 4 Ka-Sha, Type 5 To-Ku, F B Swamp Vehicle, Type 4 Ka-Tsu, Toku 4 Shiki Naikatei APC, and the SRII Ro-Go for use by the Japanese Special Naval Landing Forces. The Type 1 was an early experimental design, that led to the Type 2 Ka-Mi, which was the first production Japanese amphibious tank, although only 184 were built. The Type 3 Ka-Chi was first encountered by Allied forces at the Battle of Kwajalein in 1944, however, only 19 were built during the war. The tanks were used later in the war as dug-in pillboxes on Pacific islands.

In the period between 1931 and 1938 the Japanese built nearly 1,700 new tanks, making them the 4th largest tank producer in the world at that time.[8] The peak of Japanese tank production was in 1942, but declined afterwards owing to aircraft and warship priorities. By 1937, Japan fielded 1,060 tanks in 8 regiments. Japan developed many experimental and operative armored vehicles and tank types throughout the war; but largely held them in reserve, for home-land defense.

Throughout the war Germany supplied blueprints, technological support, and some examples of their tanks to Japan in accordance with the Tripartite Pact signed by the Axis powers. Some of knowledge shared with Japan inspired or influenced later Japanese armored vehicles, for example: