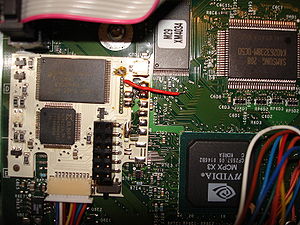 A Modchip, the white circuit board, attached to an Xbox's PCB

A modchip (short for modification chip) is a small electronic device used to modify or disable built-in restrictions and limitations of computers, specifically videogame consoles. It introduces various modifications to its host system's function, including the circumvention of region coding, digital rights management, and copy protection checks for the purpose of running software intended for other markets, copied game media, or unlicensed third-party (homebrew) software.

Modchips are mainly used in CD/DVD-based videogame systems due to the availability and low cost of user-writable media. In addition to games consoles, modchips are also available for some DVD players to circumvent region code enforcement and user operation prohibitions.

Modchips operate by replacing or overriding a system's protection hardware or software. They achieve this by either exploiting existing interfaces in an unintended or undocumented manner, or by actively manipulating the system's internal communication, sometimes to the point of re-routing it to substitute parts provided by the modchip.

Most modchips consist of one or more integrated circuits (microcontrollers, FPGAs, or CPLDs), often complemented with discrete parts, usually packaged on a small PCB to fit within the console system it is designed for. Although there are modchips that can be reprogrammed for different purposes, most modchips are designed to work within only one console system or even only one specific hardware version.

Modchips typically require some degree of technical acumen to install. Modchips must be connected to a console's circuitry, most commonly by soldering wires to select traces or chip legs on a system's circuit board. Some modchips allow to be installed by directly soldering the modchip's contacts to the console's circuit ("quicksolder"), by the precise positioning of electrical contacts ("solderless"), and, in rare cases, by plugging it into a system's internal or external connector.

Memory cards or cartridges that offer functions similar to modchips work on a completely different concept, namely by exploiting flaws in the system's handling of media. Such devices are not referred to as modchips, even if they are frequently traded under this umbrella term.

Cartridge-based console systems did not have modchips produced for them. They usually implemented copy protection and regional lockout with game cartridges, both on physical and software level. Converters or passthrough devices have been used to circumvent the restrictions, while flash memory devices (game backup devices) were widely adopted in later years to copy game media. Early in the transition from solid-state to optical media, CD-based console systems did not have regional market segmentation or copy protection measures due to the rarity and high cost of user-writeable media at the time.

Modchips started to surface with the PlayStation system, due to its popularity and the increasing availability and affordability of CD writers. At the time, a modchip's sole purpose was to allow the use of imported and copied game media.

Today, modchips are available for practically every current console system, often in a great number of variations. In addition to circumventing regional lockout and copy protection mechanisms, modern modchips may introduce more sophisticated modifications to the system, such as allowing the use of user-created software (homebrew), expanding the hardware capabilities of its host system, or even installing an alternative operating system to completely re-purpose the host system (e.g. for use as a home theater PC).

Most modchips open the system to copied media, therefore the availability of a modchip for a console system is undesirable for console manufacturers. They react by removing the intrusion points exploited by a modchip from subsequent hardware or software versions, changing the PCB layout the modchips are customized for, or by having the firmware or software detect an installed modchip and refuse operation as a consequence. Since modchips oftentimes hook into fundamental functions of the host system that cannot be removed or adjusted, these measures may not completely prevent a modchip from functioning but only prompt an adjustment of its installation process or programming, e.g. to include measures to make it undetectable ("stealth") to its host system.

With the advent of online services to be used by video game consoles, some manufacturers have executed their possibilities within the service's license agreement to ban consoles equipped with modchips from using those services.[1]

Some console manufacturers included the option to run homebrew software or even an alternative operating system on their consoles, however, these features have mostly been withdrawn again.[2][3][4] An argument can be made that a console system remains largely untouched by modchips as long as their manufacturers provide a legitimate way of running unlicensed third-party software.[5]

One of the functions of many modchips—the circumvention of copy protection mechanisms—is outlawed by many countries' copyright laws such as the DMCA in the USA, the EUCD and its various implementations by the EU member countries, and the Australian Copyright Act. However, due to the many diversified functions of a modchip, other laws may apply to a modchip as well, allowing specific functions (e.g. the circumvention of region coding under Australian law).

The nonuniform interpretation of applicable law by the courts and constant profound changes and amendments to copyright law do not allow for a definitive statement on the legality of modchips. Because of the ambiguity of applicable laws, a modchip's legality under a country's legislature may only be individually asserted in court.

Most of the very few cases that have been brought before a court have ended with the conviction of the modchip merchant or the manufacturer under the countries' anti-circumvention laws. A small number of cases in the United Kingdom and Australia have been dismissed under the argument that a system's copy protection mechanism would not be able to prevent the actual infringement of copyright (which would be the actual process of copying game media), therefore it cannot be considered an effective TPM protected by anti-circumvention laws.[6][7] Australian copyright law has since been amended to effectively close this legal loophole.[8]

Although being an unregisterable generic term in many countries, "Modchip" is a registered trademark in Canada.[9]